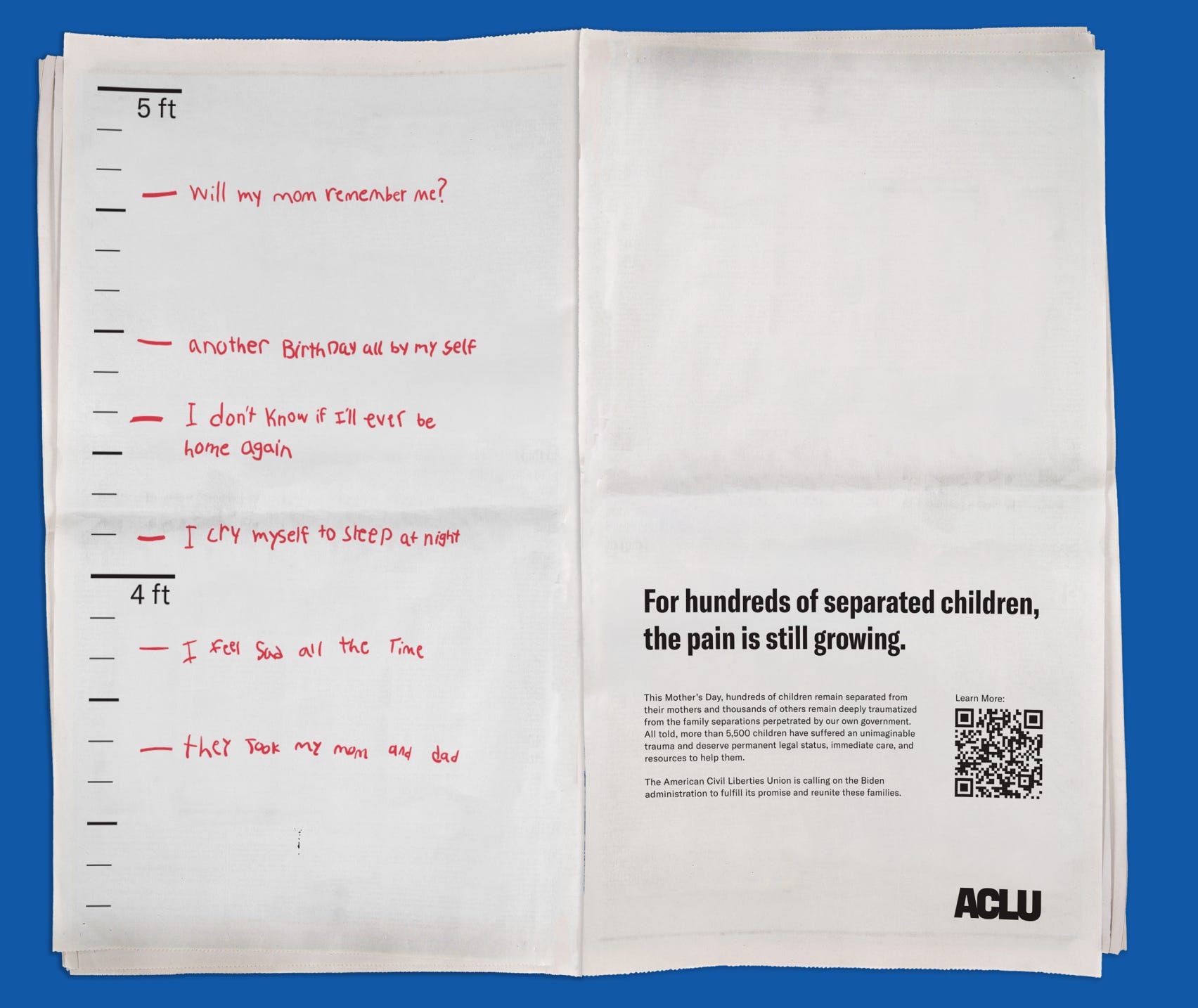 Courtesy of the ACLUAn ad from the ACLU slated to run in the New York Times on Sunday.

The American Civil Liberties Union took out a two-page ad in the Sunday New York Times that urges the Biden administration to reunite migrant families with their children.

The ad, meant to illustrate wall markings that track a child’s growth, is slated to run on Mother’s Day, an ACLU spokesperson confirmed to Insider. Axios first reported the news.

“Another birthday all by myself,” one of the ticks reads.

“I feel sad all the time,” another tick reads.

The ACLU in 2018 sued the Trump administration, in which a federal court in San Diego ruled that it’s unconstitutional to separate parents and children.

When now-President Joe Biden entered office, he promised to reunite families separated at the border. But the local of hundreds of parents remains unknown, and about 1,000 families still remain separated, the ACLU said in a press release.

“This Mother’s Day, hundreds of children remain separated from their mothers and thousands of others are suffering from the trauma Trump’s family separation practice inflicted,” ACLU Executive Director Anthony D. Romero said in a statement. “More than 5,500 families have suffered unimaginable trauma and deserve a path to citizenship, immediate care, and resources to help them.”

Biden, about two weeks into his first term as president, signed an executive order that rescinded Trump’s immigration policy. The order also instilled a Family Reunification Task Force, charged with leading the effort to bring together separated families.

The task force is expected to deliver a progress report on June 2.

“This Mother’s Day, despite the change in administration, hundreds of people will be forcibly expelled from the United States – including mothers traveling with or to their children – under a Trump-invented process that entirely bypasses the asylum laws,” Omar Jadwat, director of the ACLU Immigrants’ Rights Project, said in a statement.

“President Biden promised to build a humane immigration system that aligns with our values,” Jadwat added in the statement. “Today millions of lives depend on his ability to deliver on that promise.”