Athit Perawongmetha/ReutersVisitors on the roof of the Sathorn Unique, also known as the ‘Ghost Tower,’ in Bangkok, Thailand.

The Sathorn Unique building in Bangkok, Thailand, was supposed to be a luxury condominium.

Instead, it became an eerie, abandoned skyscraper known as the “Ghost Tower,” drawing urban explorers from around the world.

The building is surrounded by a fence with signs warning that trespassers will be prosecuted, but that hasn’t stopped people whose curiosity gets the better of them.

Take a look inside the 49-story abandoned building in the middle of Bangkok.

From the outside, the Sathorn Unique skyscraper looks like any other building in Bangkok’s skyline. 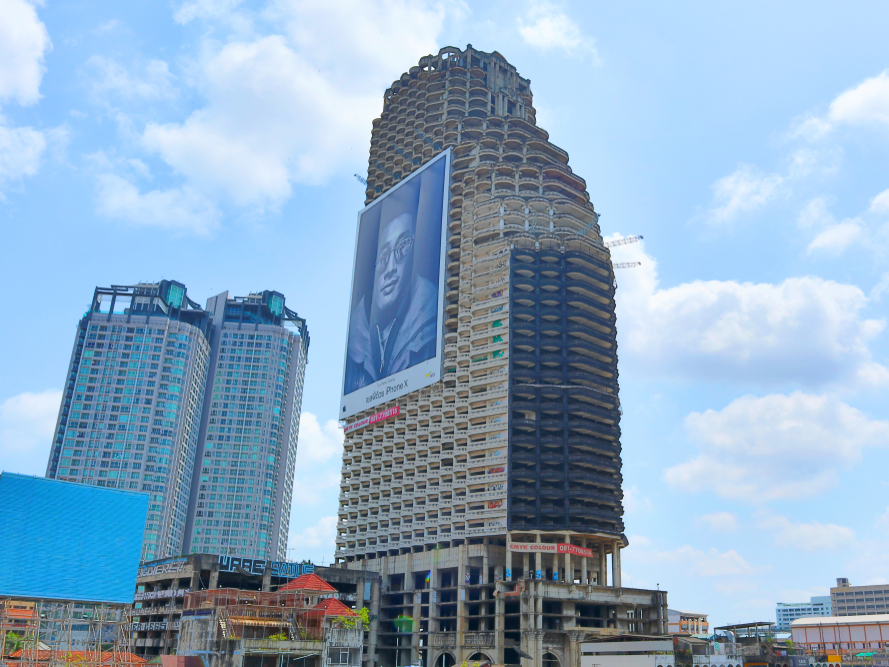 The building sits near the Saphan Taksin BTS skytrain station in Bangkok.

Parts of it are still covered in ads. But construction came to a halt after the Asian financial crisis in 1997. 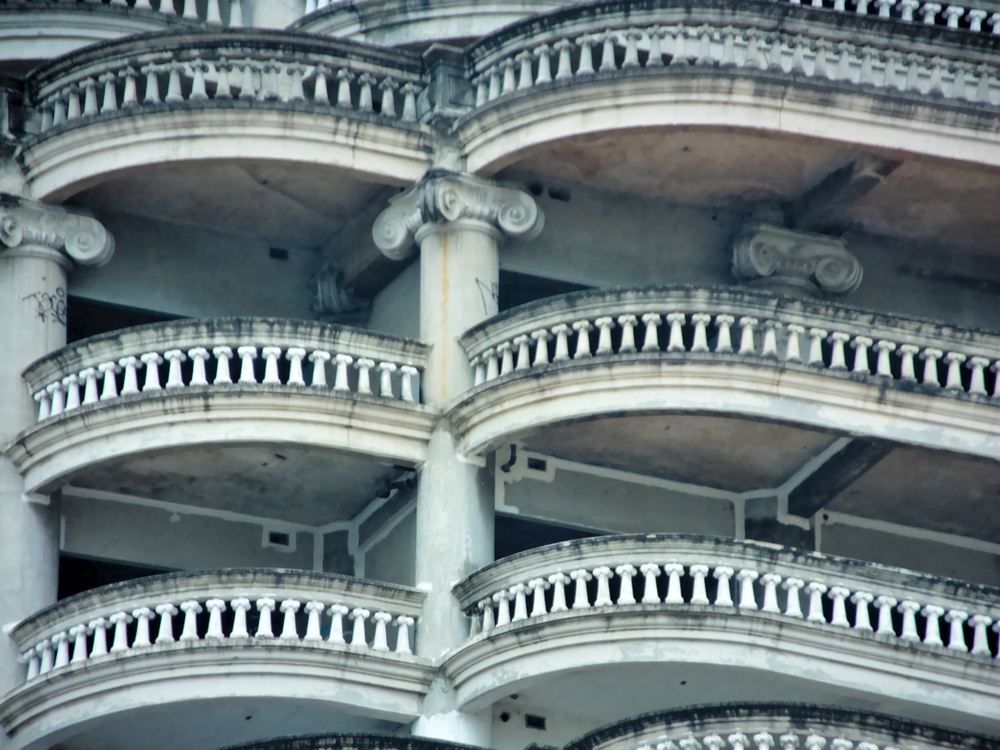 During the 1997 Asian financial crisis, stock markets and currency values in east and southeast Asia plummeted. The event was triggered by the Thai government’s decision not to peg the baht to the US dollar, devaluing the currency and causing a chain reaction.

The Sathorn Unique, which had been under construction for seven years, was 80% finished when the crisis hit, according to The Telegraph.

The abandoned skyscraper is now known as the “Ghost Tower.” The building is said to be haunted – especially the 43rd floor, where the body of a backpacker was found in 2014.

It appears even more ghostly at night. 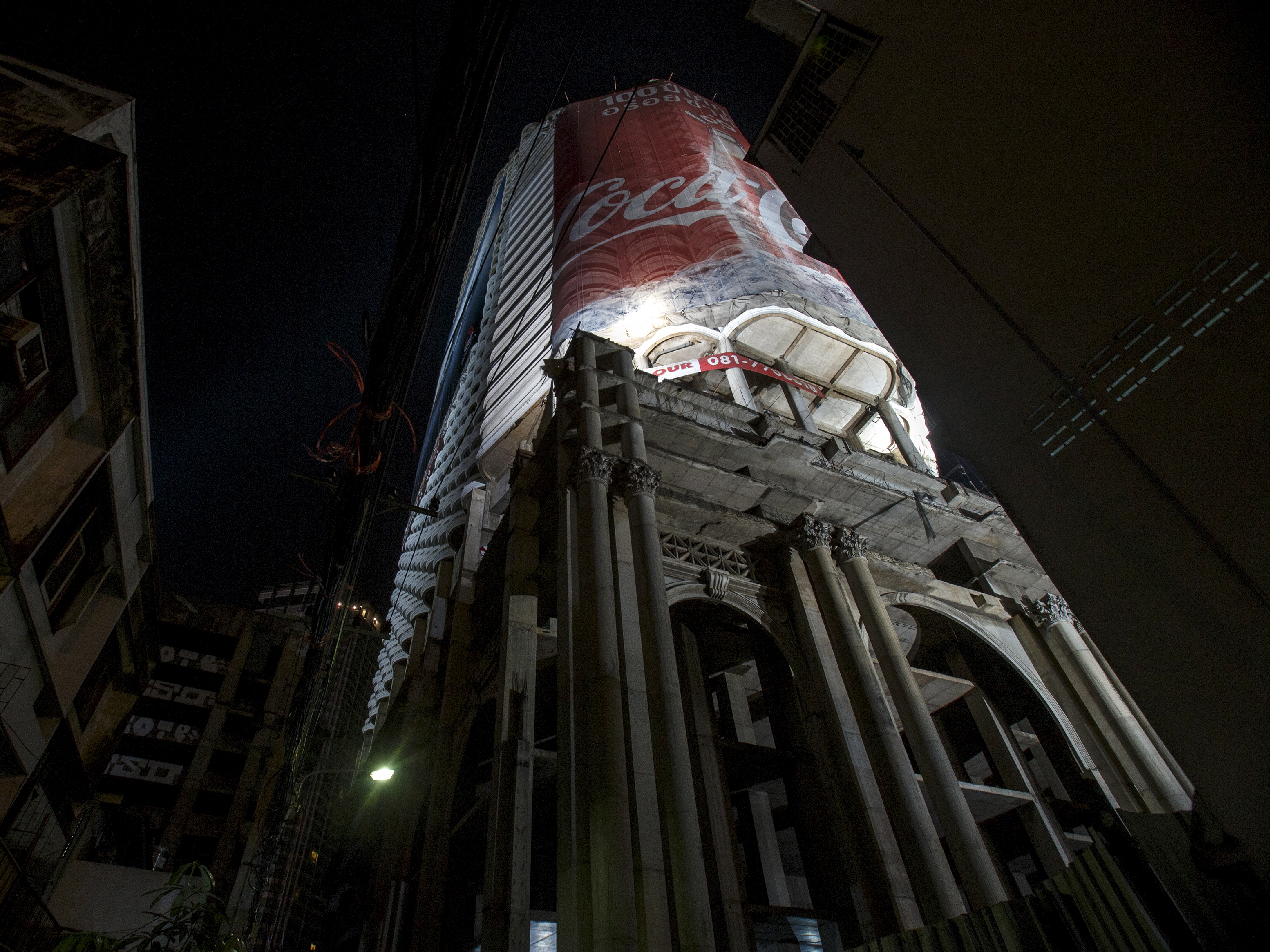 Aside from a few lights, the building is mostly dark and without electricity.

What’s left of the walls is crumbling. 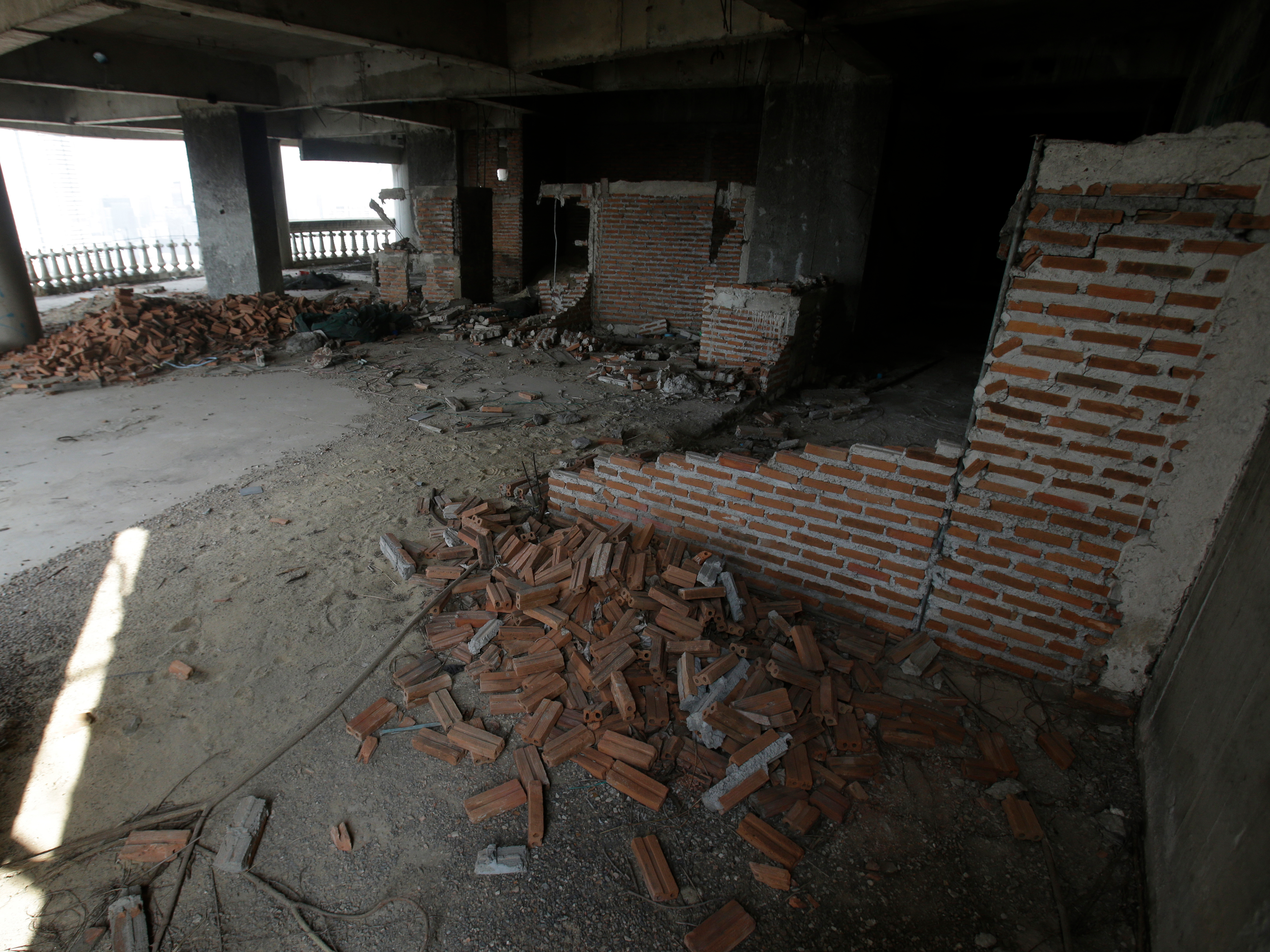 What were supposed to be exposed brick walls are nothing but rubble.

Furnishings that were never installed litter the halls. Bathtubs sit overturned in the hallways.

Decorative columns sit in a heap on the floor. One can imagine how grand the rooms would be if construction had been completed.

It’s illegal to enter the abandoned building, but that doesn’t stop some bold adventurers from visiting. According to TripAdvisor reviews, security guards often stop would-be explorers from entering, but some visitors say they paid them off to gain access.

Some visitors leave their mark with graffiti on the walls. 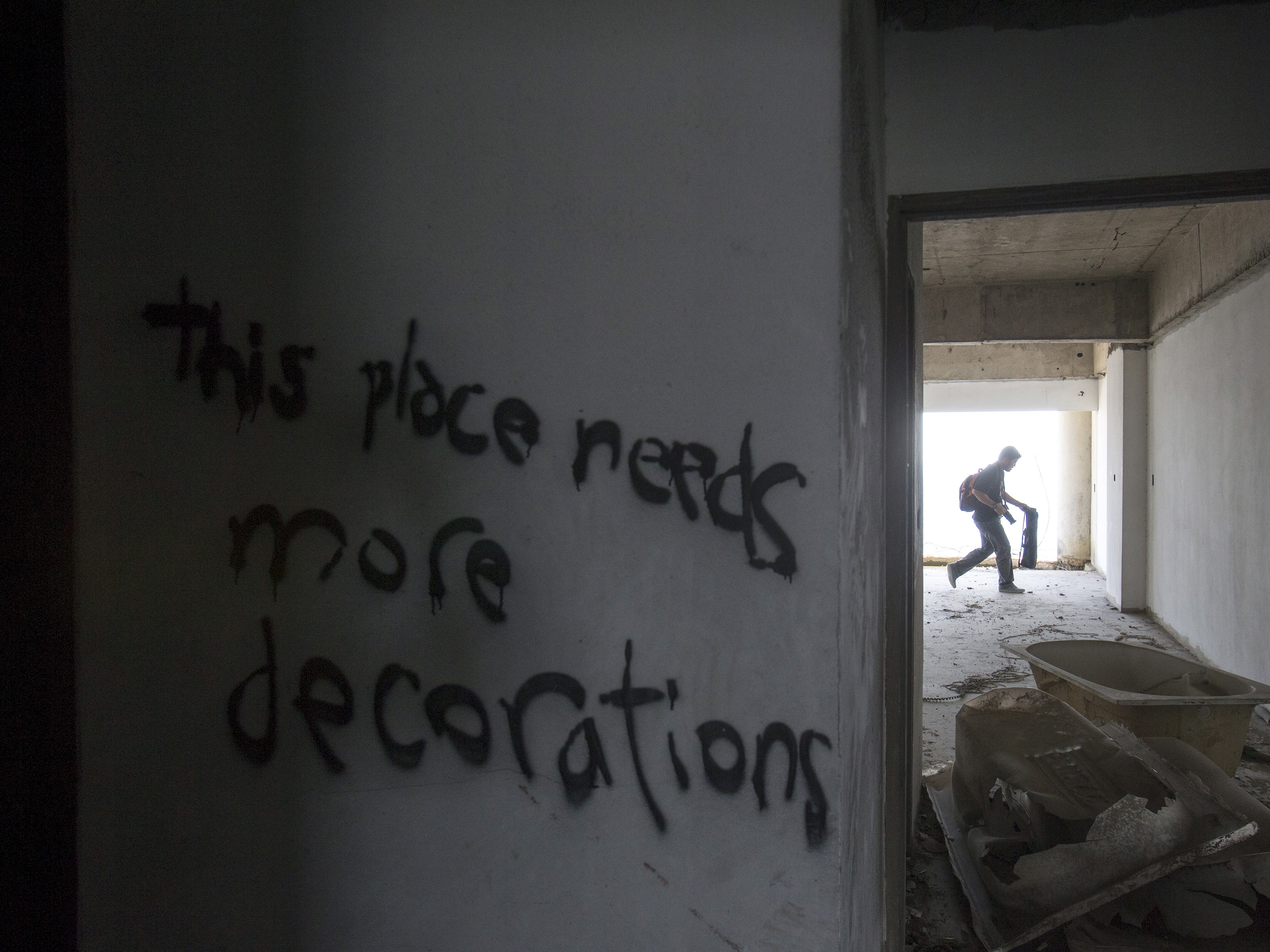 Athit Perawongmetha/ReutersGraffiti in the Sathorn Unique.

The above graffiti reads, “This place needs more decorations.”

Getting upstairs involves a treacherous climb. 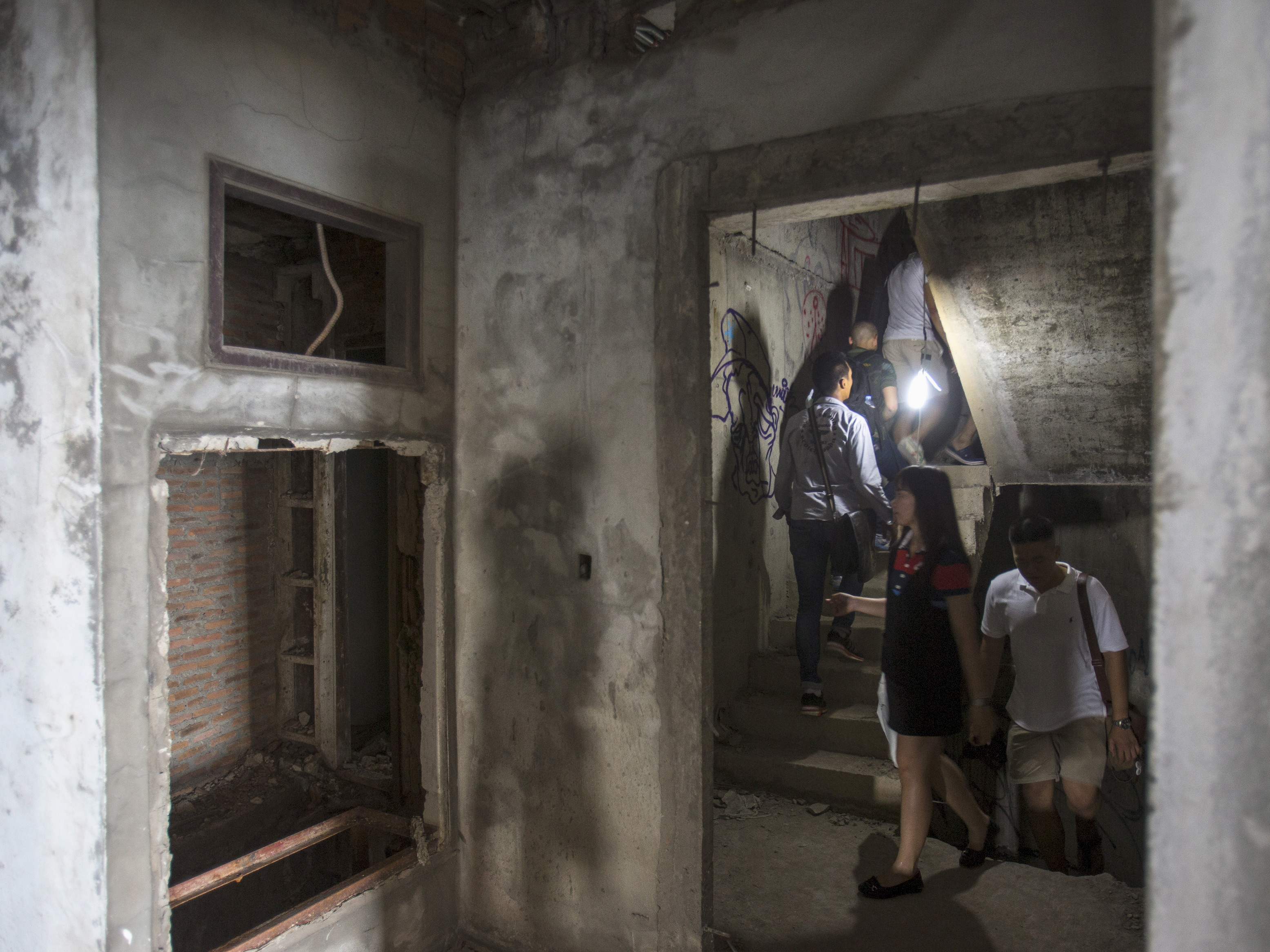 Athit Perawongmetha/ReutersVisitors walks up the fire escape inside the Sathorn Unique.

One way to get to the roof is through the fire escape. Sakchai Lalit/APGraffiti covers the roof of the Sathorn Unique building.

Climb at your own risk.

Much of the balcony is overgrown with weeds. Some of the balconies’ decorative poles have fallen over.

But it does provide a sweeping view of the Chao Phraya river. 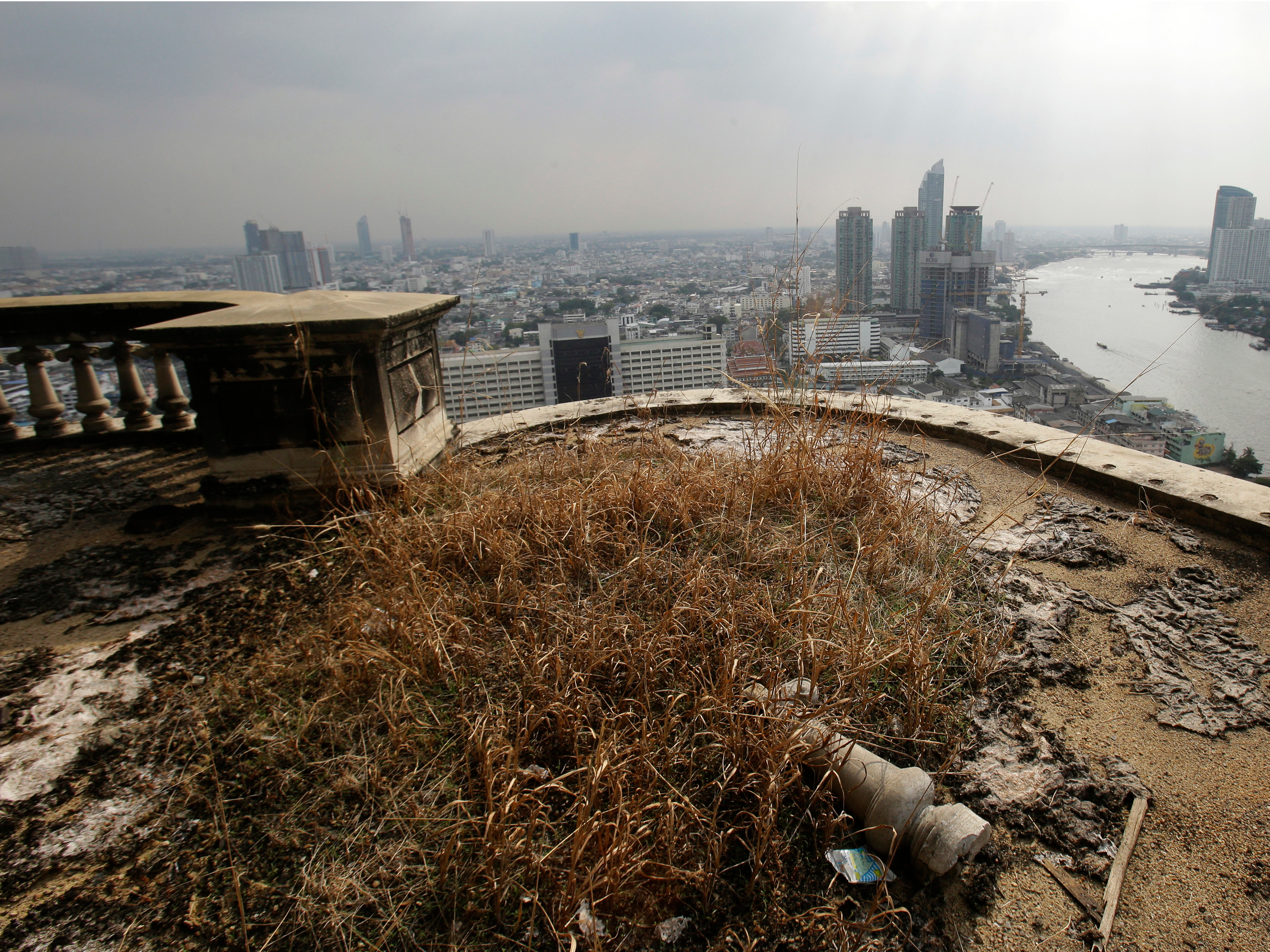 Sakchai Lalit/APThe view from the top of the Ghost Tower.

Just watch where you step.

There’s plenty of graffiti on the roof, too. Urban explorers who made it to the top of the tower have left their mark.

Other inhabited buildings are visible through cement doorways. Other unfinished skyscrapers left over from the 1997 financial crisis have either been torn down or completed, according to Lonely Planet.

Sathorn Unique was supposed to house luxury condominiums on par with the rest of Bangkok’s skyline. 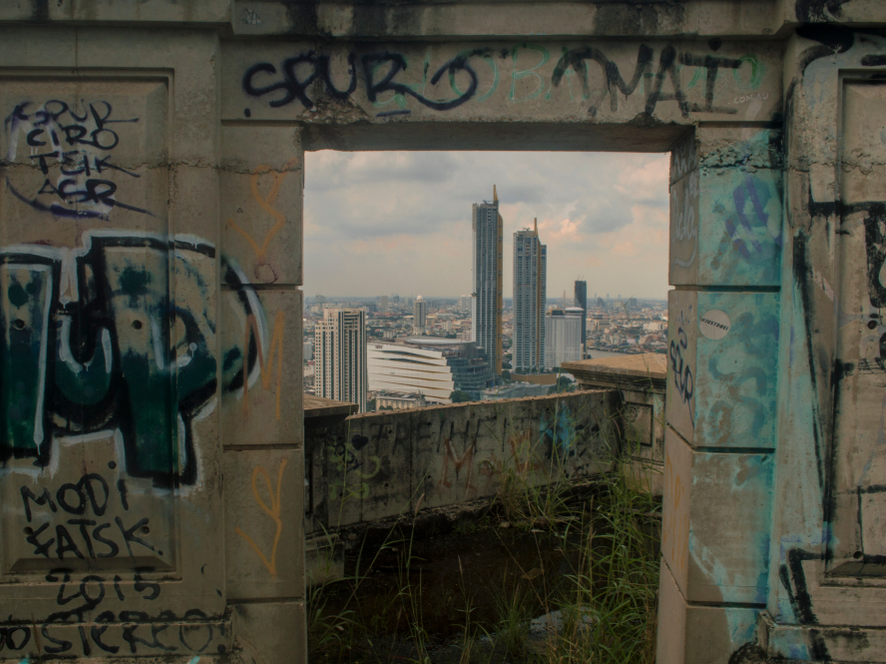 It was supposed to have 659 residential units and 54 retails, according to Atlas Obscura.

It’s become a different kind of attraction, one that draws urban explorers from around the world. 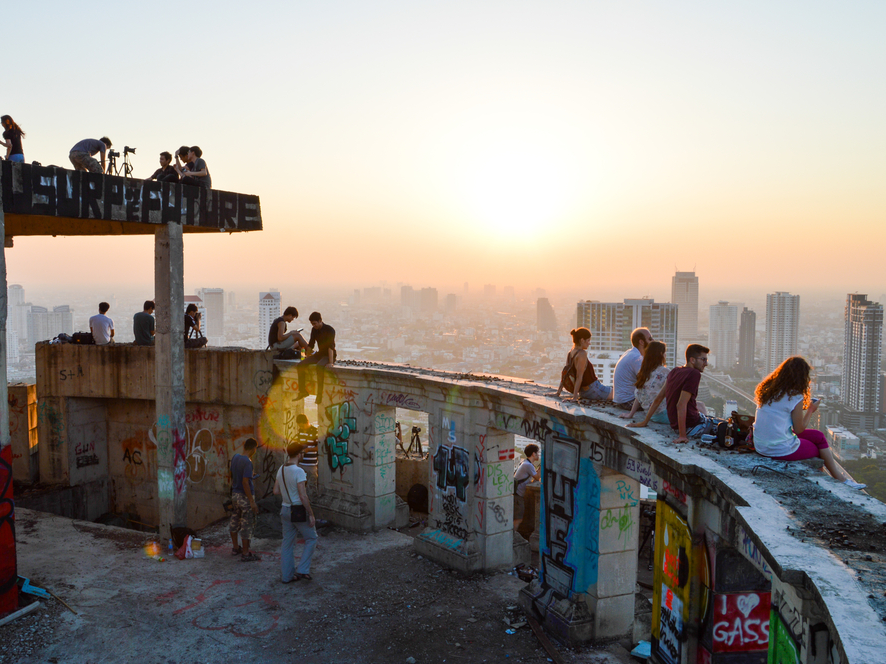 It’s a risky destination – there are no safety rails.

It’s not the safest of places. 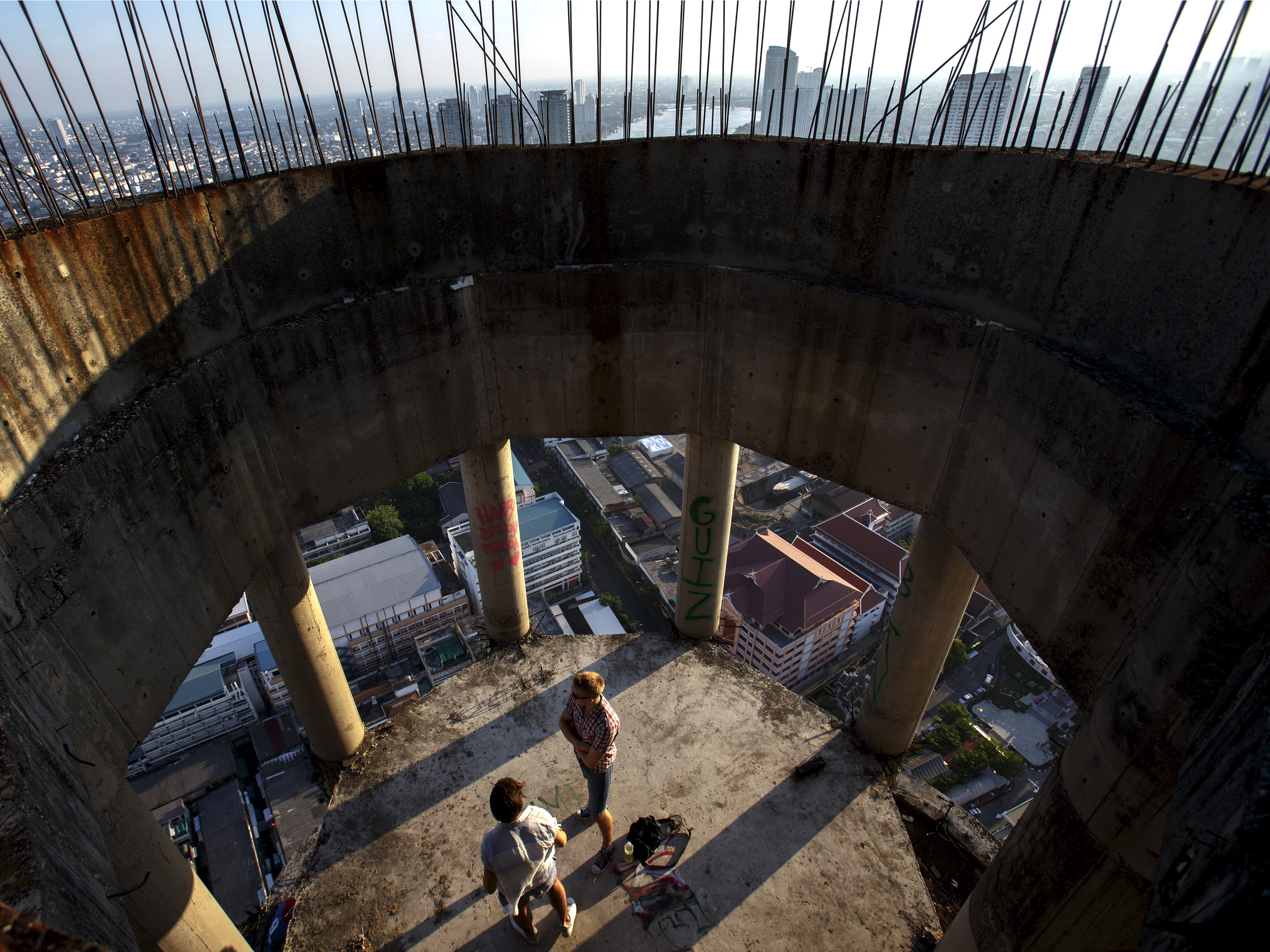 Athit Perawongmetha/ReutersLooking out on Bangkok from the Sathorn Unique.

There are also exposed wires, rusty metal, and other hazards.

But the climb certainly does pay off. Athit Perawongmetha/ReutersA couple enjoys the sunset on the roof of the Ghost Tower.