In 2021, America appeared to come precipitously close to an electoral cliff as record numbers of members of Congress objected to the counting of certified slates of electoral votes for President-elect Joe Biden â€” even after Congress was besieged by a violent mob of pro-Trump insurrections whose goal was to stop the count.

A number of Republican senators, including Mike Braun of Indiana, Ron Johnson of Wisconsin, Bill Hagerty and Marsha Blackburn of Tennessee, and former Sen. Kelly Loeffler of Georgia, stood down from their previous plans to vote to reject slates of electors, meaning that only six of the 99 present voted to sustain the objection to Arizona’s electors and seven for the objection to Pennsylvania’s electors.

In the House, however, most Republicans followed through with their plans to formally object to Arizona’s slate of 11 electors and Pennsylvania’s slate of 20 for Biden. After the insurrection, 56% of the House GOP caucus voted to reject Arizona’s electors and 65% moved to reject Pennsylvania’s electors, moves based on Trump’s repeated and baseless claims of election fraud that failed in dozens of court cases.

Those efforts also failed in both the House and Senate, but they raised new concerns for what could happen in 2024 or further down the line if one party controls both chambers of the Congress and a candidate from the opposing party wins.

It’s well within the realm of possibility that Democrats in the 2022 mid-terms could lose their slim control of both bodies of Congress, setting up the potential for a bid to overturn states’ electoral votes. But even so, Congress has limited power to rejected certified electors and would face a tough case in court to defend this unprecedented and anti-democratic act.

Can Congress unilaterally overturn election results? It’s not so simple.

Congress would have needed to reject multiple states Biden won to overturn his 306-232 electoral vote defeat of Trump. But what if the Electoral College vote was much closer?

Consider a closer election where Congress only needed to reject one state’s slate of electors to overturn the winner’s victory, leaving no candidate with a clear majority of electoral votes. This could trigger a contingent election where the House would decide the winner. In that process, each state delegation, as opposed to each member individually, would get one vote.

It’s well within the realm of possibility for Republicans to regain control of both the House and Senate given their extremely narrow majorities in both chambers and the historical precedent of the opposition party to the president gaining seats in midterm elections.

Democrats’ losses in 2020’s US House elections not only narrowed the size of their majority, but also deepened the disadvantage they hold in control of state delegations.

After the disputed election between Samuel Tilden and Rutherford B. Hayes in 1876, it took Congress 10 years and two more close elections in 1880 and 1884 to come up with a necessary, but still imperfect, solution.

The Electoral Count Act of 1887, which sets the rules for how Congress is to count electoral votes, states that chambers of Congress can vote to reject a state’s slate of electoral votes that were either not “lawfully certified” by a state’s governor and/or not “regularly given,” according to the National Task Force on Election Crises.

But could two Republican-controlled chambers of Congress categorically reject slates of electors for Biden, if he runs for and secures a second term, at their own whim? Adav Noti, senior director for trial litigation at the Campaign Legal Centre, told Insider that it’s not so simple â€” and no political party would be likely to get away with such a democracy-subverting plot in the courts.

“There are very limited grounds on which a member of Congress can object to a state’s determination,” Noti said, the first being if a state did not properly certify its electors in the set timeline.

If a state properly submitted certificates of their electoral votes by the set deadline, he added, “the objection has to be on the grounds that either the people who cast the electoral votes were not the actual electors elected from that state, or that they did not cast their votes in a legal manner, for example, because they were bribed.”

In 1969, two members of Congress objected to the counting of a faithless elector from North Carolina on the second ground, challenging the elector’s vote because he was pledged to vote for Republican nominee Richard Nixon but instead cast his vote for George Wallace. Both chambers of Congress ultimately rejected the objection.

“But those are extremely narrow: either the wrong people had to have voted, or they had to have voted illegally. None of what got raised in this election falls into either of those categories,” Noti said. “There was nobody saying that the slate of 20 electors from Pennsylvania were not in fact the people designated by the state. They were, obviously, the people designated by the state, so that takes care of the ‘lawfully appointed’ part, and no one was saying that they cast their votes illegally.”

Noti said that “second-guessing” a state’s designation of electors that were, in fact, elected by the voters, as Republicans did on January 6, “is not within Congress’ power” and wouldn’t pass muster if seriously attempted.

“That’s what I think a court would say if Congress tried to go down this road. The opposing candidate, and/or the opposing electors would file suit and say, ‘no, you, you cannot under any provision of law or the constitution deprive us of the electoral votes to which we are entitled by law.’ And I think, a court would say to Congress, ‘what’s your basis for doing this?’ And if they don’t have one, I think Congress would likely lose that fight.”

How the shocking death of Virgil Abloh is sparking important discussions... 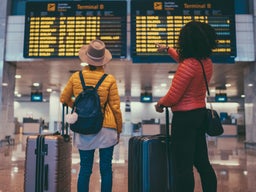