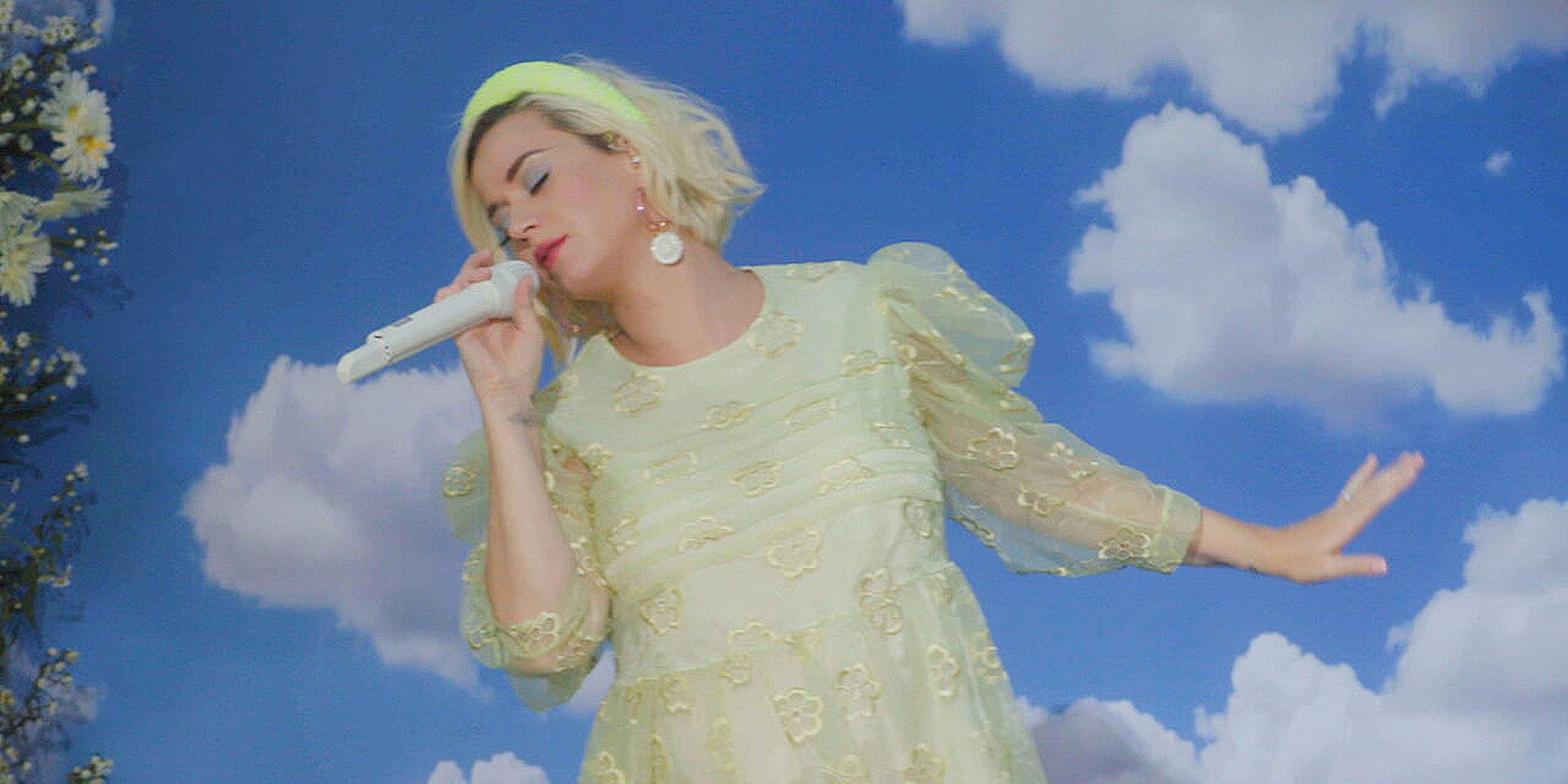 ABC News/Frame Grab via Getty ImagesKaty Perry performed her song ‘Daisies’ at the ‘GMA’ Summer Concert Series on May 22, 2020 on ABC. Perry’s new album ‘Smile’ is due out next month.

A 19-year-old Twitter stan went viral for his colourful redesign of the cover of “Smile,” Katy Perry’s upcoming fifth studio album, and got a shout out from several famous faces – including the artist herself.

The album artwork, officially revealed by Perry last week as part of the promotional campaign for “Smile,” slated to be released on August 14, featured a blonde Perry donning a clown nose with the album’s name inscribed in blue text inside a large red box.

Its design elicited a range of feedback, including a positive reception from loyal Perry fans, known online on as “Katycats.” Others weren’t thrilled with the album art, particularly when they compared it to Perry’s previous four works.

“I actually wasn’t planning to make a ‘Smile’ cover redesign, but once I saw the hint of clown and circus visuals, I saw a potential and immediately imagined what it could’ve been on a bigger scale,” Peter, known by his Twitter username “FAMEKILLED” told Insider. “Once I started putting it together, it came along so well, so it took me about one or two days.”

His Twitter account has more than 7,400 followers, though Peter has been around on “stan Twitter” in some variety since 2015, he told Insider. Peter – a superfan of Lady Gaga – said he’d describe “stan Twitter” to someone unfamiliar as a place where fans of “pop girls” come together in a way similar to the way sports fans unite behind their favourite teams.

Stan Twitter has existed for years, and the culture even longer on other websites like Tumblr. It’s received greater national attention recently, particularly for headlines that claimed stan accounts for K-pop groups helped orchestrate a messaging campaign that influenced turnout to President Trump’s June rally in Tulsa.

The self-taught graphic artist shared his work on Friday. Since then, it’s been retweeted more than 12,000 times and received over 80,000 likes. His design further utilised the clown imagery from the official one, turning Perry’s blue and white checkered outfit into a circus tent inspired by the FX television show “American Horror Story.” Using Adobe Photoshop, he also added exploding fireworks and a winding roller coaster behind her.

“This is so good!” the Australian rapper Iggy Azalea, who is most known for her 2014 collaborations with Ariana Grande and Charli XCX, tweeted.

This is so good!

oh my GODDDD @katyperry change the cover to this!!!!!!!

Perry seemed to catch on to the widespread reaction to the fan art, sharing the design in a tweet that has garnered more attention than the original, with 16,000 retweets and more than 160,000 likes.

Perry wrote, “calling you for next record,” in response to the design.

Calls for Perry to consider changing the artwork have circulated across social media, and nearly 200 people have signed a Change.org petition calling for the album artwork to be switched.

“I was so happy people loved it so much,” Peter told Insider. “I’ve gotten big reactions to previous designs, but this was on a whole new level.

“I think people are so into it because it seemed like this is what we all wanted it to be,” he added.

Peter, who asked Insider not to share his last name – many accounts on “stan Twitter” keep their online personalities separate from their real-life identities, doesn’t think Perry was seriously inviting him to design the cover for her next album, but he’d welcome the opportunity.

“OH IM ALL FOR THAT,” he tweeted in response to Perry.

“I’m not a full stan but I do like her old eras,” he said, in reference to Perry’s previous works that include her 2010 release, “Teenage Dream,” which launched some of her biggest hits like “Firework” and “California Gurls.”

After his tweet went viral, others pointed out some negative tweets he had sent out about Perry’s recent work, though he said that type of behaviour is par for the course on stan Twitter.

“My previous tweets were personal opinions about the song and cover – not hate for no reason,” he said. “And I usually post these opinions in a sarcastic, mean tone, like most of stan Twitter does.”

Peter plans to study the field in college and one day work professionally with artists.

“I’ve always loved making concepts and would love to become a creative director for artists,” he said, adding “because I think being a fan makes you know more of what the fans want and expect.”

For his next project, Peter said he’s working to finish a design to submit for Lady Gaga’s recently announced collaboration with Adobe, which asks fans to submit their own art as part of the promotional campaign for her recent release, “Chromatica.”

TikTok star Tony Lopez is being called out for his past sexist, racist, and homophobic tweets

YouTuber Sky Williams says he owes at least $US200,000 to more than a dozen people

A YouTube drama reporter claimed the police were investigating Shane Dawson’s old videos. Now he’s facing backlash of his own.