A 7-year-old Texas boy spent 12 days on a ventilator in the fight for his life. His mum says schools should stay closed. 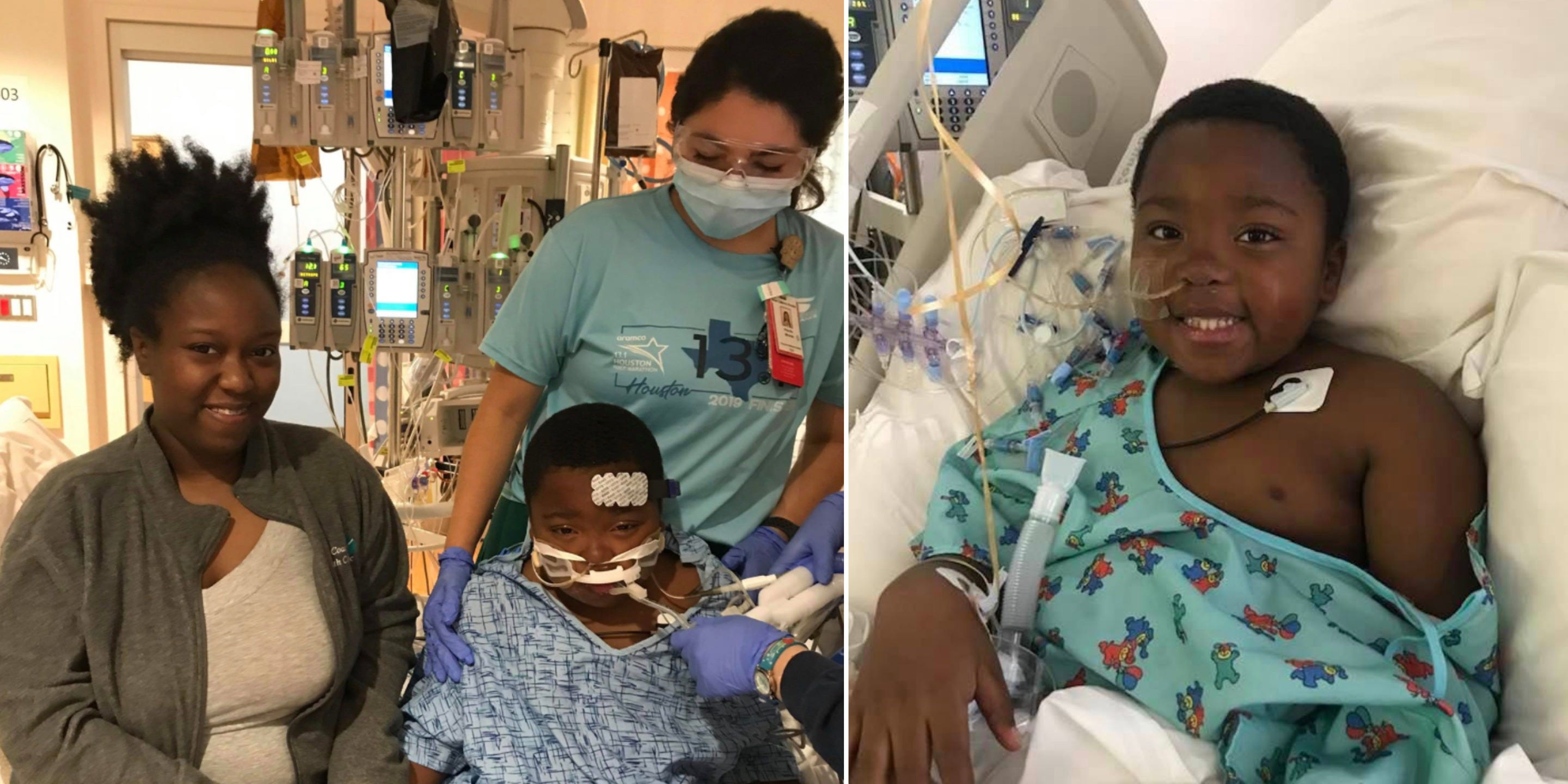 Nykiera Petry-SheltonA 7-year-old Texas boy is on the mend after spending more than three weeks in the hospital battling COVID-19.

Nykiera Petry-Shelton has no idea how her 7-year-old son contracted the coronavirus. Her otherwise healthy child, Zabraylin, had never previously been hospitalized. But in early July, when he started to shake uncontrollably and lost movement in his legs, a terrified Petry-Shelton would soon find out Zabraylin was infected with COVID-19.

“I was so scared,” Petry-Shelton told Insider. “All I could do was sit there with tears running down my face … I would have never thought that it would have happened to us, and especially him.”

Petry-Shelton still hasn’t figured out how her son contracted the novel coronavirus, which according to a Tuesday tally from the Johns Hopkins University has infected at least 4,742,277 Americans and killed 156,133. No one else in their household has experienced symptoms of COVID-19, she said.

“He doesn’t have any problems and he for sure didn’t go anywhere in public,” she said, speculating that he might have been passed the virus from another kid he was playing with outside.

Days before his hospitalisation, however, Petry-Shelton noticed Zabraylin appeared flushed and had a 103-degree fever, she said. She carted him between local urgent care facilities and a nearby hospital in an attempt to diagnose his days-long fever, even getting him tested for the coronavirus by urgent care doctors and at a local hospital. But the results were negative.

Petry-Shelton said she treated her son’s fever with Tylenol and Motrin. Doctors prescribed antibiotics, believing it was caused by some sort of infection. Nothing worked.

“They never specified what it was,” Petry-Shelton said. “They didn’t find anything.”

Things took a turn for the worse on July 9. When she and Zabraylin drove up to their home, he was unable to get out of the car on his own. He told his mum he couldn’t feel his legs.

“He was just shaking as if he was about to have a seizure or something,” she said.

Petry-Shelton called an ambulance and paramedics took his vitals – his blood pressure was low and his heart rate was elevated, she said. In the emergency room, Zabraylin had a 105-degree fever. Doctors decided Zabraylin would be best treated at Texas Children’s Hospital in Houston, about 90 miles west of Port Arthur, so he was transferred there.

At that hospital, Zabraylin was moved to the COVID-19 Intensive Care Unit (ICU), put on a ventilator, and given yet another test for COVID-19. This time the results came back positive, and he remained on a ventilator in a medically induced coma for 12 days.

Doctors diagnosed Zabraylin with multisystem inflammatory syndrome in children (MIS-C), an immune system response which the Centres for Disease Control and Prevention warned in May occurred in some children who contracted COVID-19.

MIS-C “is a condition where different body parts can become inflamed, including the heart, lungs, kidneys, brain, skin, eyes, or gastrointestinal organs,” the CDC warned. “Children with MIS-C may have a fever and various symptoms, including abdominal (gut) pain, vomiting, diarrhoea, neck pain, rash, bloodshot eyes, or feeling extra tired.”

After 12 days on a ventilator and success in reducing his inflammation and other symptoms by using remedsivir, medication to control his blood pressure as well as steroids, and blood-thinners to prevent clotting, doctors woke Zabraylin. He tested negative for the coronavirus and was moved out of the COVID-19 ICU.

Zabraylin’s doctors, who continue to monitor his heart, haven’t said they’re worried about any long term effects, but he’s still having trouble walking, a side effect of spending nearly two weeks in a hospital bed on a ventilator. Doctors are confident it will improve with time, Petry-Shelton said.

Amid debates over schools reopening for in-person classes, Petry-Shelton says her children will be staying home

Petry-Shelton warned parents against assuming their children are immune to coronavirus, even though they statistically have a lower risk of serious symptoms and side effects of the disease.

“Kids can get it,” she said, encouraging parents to take all possible precautions to keep their kids safe and healthy. “The scariest thing is not knowing exactly who it came from – who he was in contact with and how he could have gotten it.”

The debate over whether to send children in the US back to in-person classes continues as the start of the upcoming school year draws near. In July, the Texas Education Agency relaxed its previous guidance that required schools to open for in-person classes and permitted schools to limit in-person instruction for at least the first four weeks of the school year, according to the Forth Worth Star-Telegram.

President Donald Trump and his administration have insisted that schools nationwide should open for in-person instruction.

“I don’t agree with it,” Petry-Shelton, who is a nursing student and works at a local pharmacy, said. While having her kids home for school would present challenges in navigating her work and school schedule, she said her two boys will not attend classes in person.

“They will be online,” she told Insider. “Kids are already anxious and fidgety, and it’s going to be really hard to have them keep their hands clean at all times, keep their mask on the whole time they’re in school. That’s going to be hard.”

She added: “I know it’s going to be hard to keep kids inside, but I mean you have to – oh goodness, you have to sacrifice things. I could’ve lost my child just that quickly. As a parent, I know any parent will understand that.”