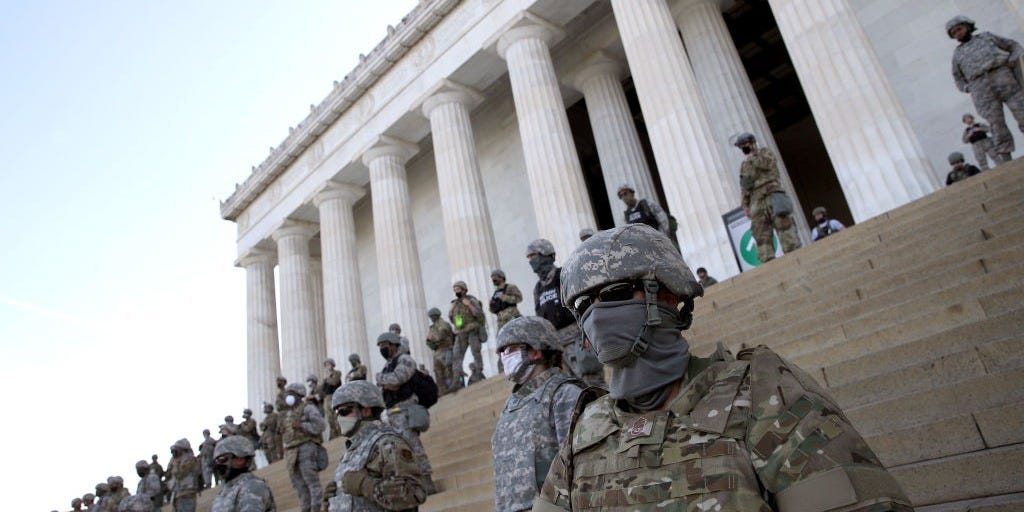 Win McNamee/Getty ImagesMembers of the D.C. National Guard stand on the steps of the Lincoln Memorial as demonstrators participate in a peaceful protest against police brutality and the death of George Floyd, on June 2, 2020 in Washington, DC

The unarmed Guard personnel will serve as “a uniformed deterrence” in “a civil disturbance and security role,” Pentagon spokesman Lt. Col. Chris Mitchell said in a statement.

Although they are available for crowd management, they are currently on standby at the DC Armory and have not yet been sent out to defend any monuments.

The decision to activate National Guard troops to protect monuments follows the vandalism and attempted destruction of the Andrew Jackson statue in Lafayette Park just outside the White House.

The shocking Memorial Day death of George Floyd, a Black man who died at the hands of a Minneapolis police officer, sparked protests across the country.

Protests in DC earlier this month drew thousands of National Guard troops, as well as federal law enforcement forces, to the nation’s capital. Active-duty military units were also brought into the surrounding areas, but they never entered DC.

As protests against racism and injustice continue, there is a growing movement to topple Confederate monuments and memorials, as well as those celebrating slave holders, explorers, and conquerors.

Critics and activists have long criticised Andrew Jackson, a former US Army general turned president, for his mistreatment of indigenous peoples.

The targeting of the statue in Lafayette Park led the president to threaten to use a little known law – the Veterans’ Memorial Preservation Act – to send protesters to jail for up to ten years, the maximum penalty under a law that likely would not apply to many of the statues being targeted.

The president then doubled down Tuesday morning, tweeting that he has “authorised the Federal Government to arrest anyone who vandalizes or destroys any monument, statue or other such Federal property in the US with up to 10 years in prison, per the Veteran’s Memorial Preservation Act, or such other laws that may be pertinent.”

“This action is taken effective immediately, but may also be used retroactively for destruction or vandalism already caused,” he added. “There will be no exceptions!”

The National Guard troops have been activated through July 8, the Pentagon said.