REVIEW: The $34,000 Mazda 3 Turbo is all grown up and aims to lure entry-level buyers from Audi and Mercedes 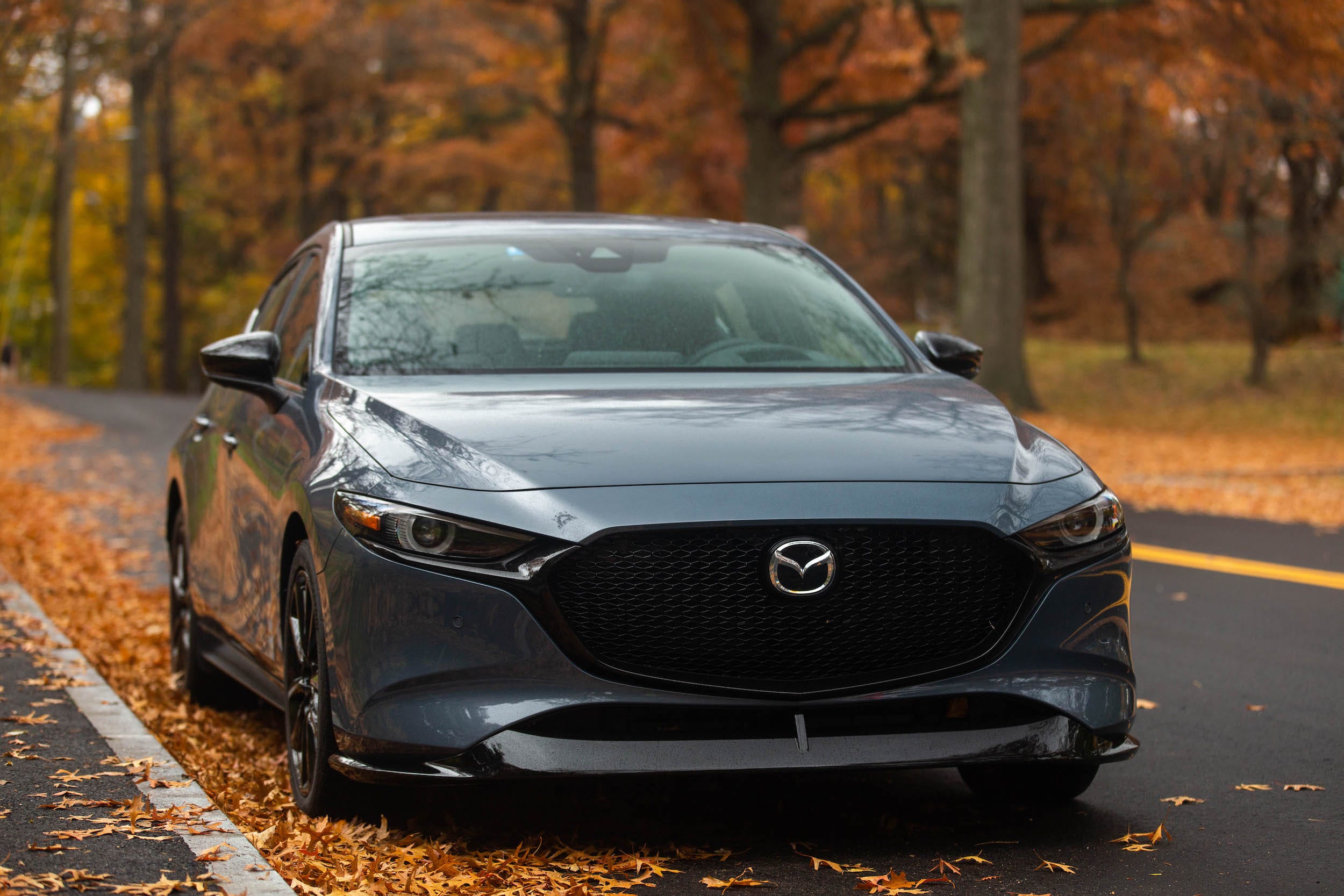 From the outside, the 2021 Mazda 3 2.5 Turbo looks the same as its non-turbocharged brethren. Save for a few badges and bigger tailpipes, it’s the same sleek design we’ve all seen ever since the new 3 debuted in 2018.

But the big deal with the 3 Turbo is what’s under the hood â€” because with the addition of a much-anticipated turbocharger, Mazda turned the humble Mazda 3 from merely fun to fun. 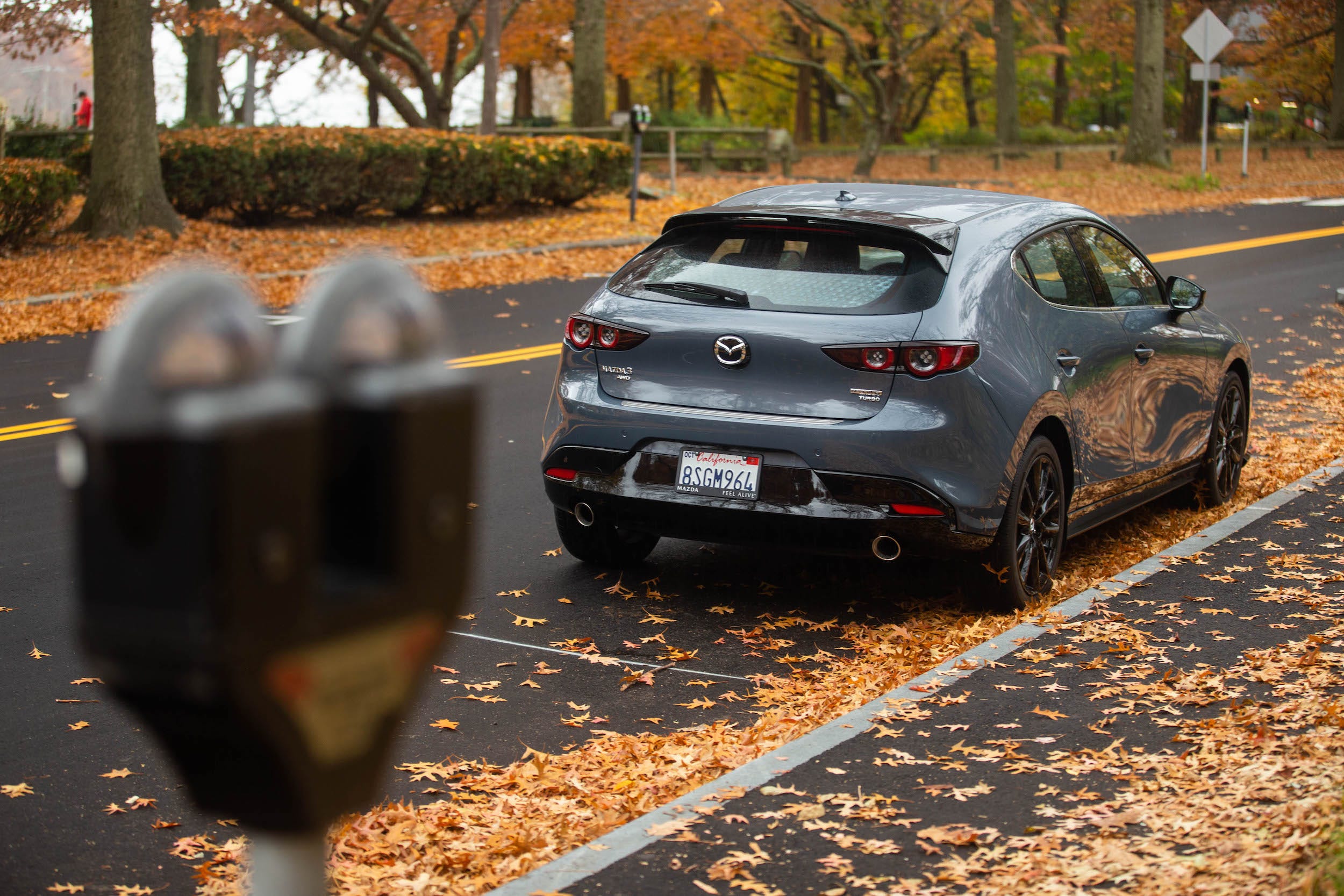 The 3 is Mazda’s entry-level car in the United States â€” a compact car available as either a hatchback or a sedan and, most importantly, with the option of a manual transmission. In July, the automaker announced the addition of a turbocharged variant to the lineup, which is a big deal.

The 3 has long been a fan-favourite, boasting good driver feedback at an affordable price point. Some, though, faulted it for being a bit low on power, so fans and enthusiasts yelled and yelled for a turbo.

As a way to bring the car further upmarket, Mazda finally answered on the current- and fourth-generation Mazda 3. 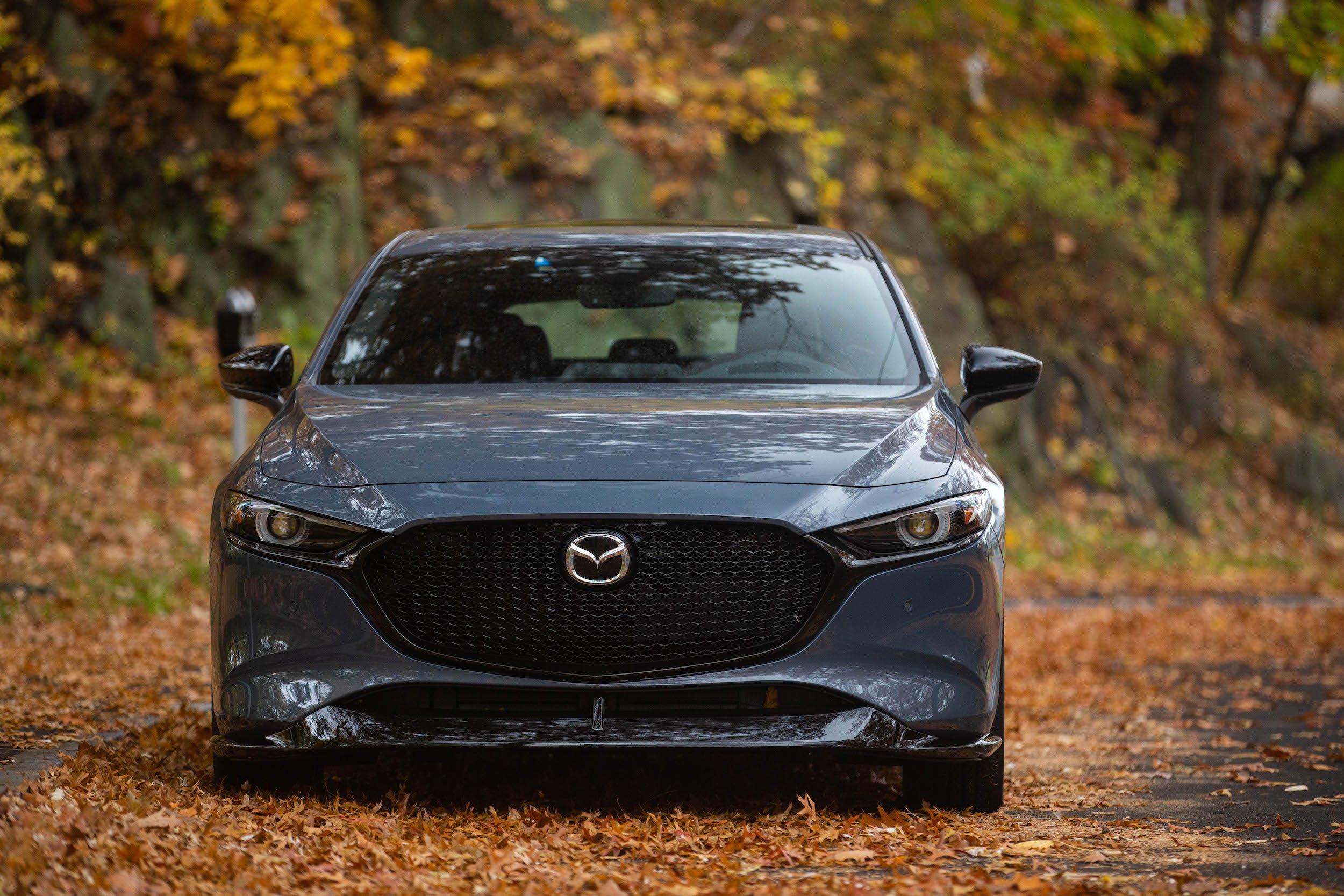 The move gave the car more power and Mazda the justification for charging about $US13,000 more for it over the base model.

Details and safety ratings: Five stars all around

That turbocharged engine comes with a few strings, however â€” namely, the removal of the optional manual transmission. Yes, I’m sorry to say that you cannot get the Mazda 3 Turbo with a clutch pedal. It does come exclusively with all-wheel drive, though, to help with traction while driving through all the purist tears. 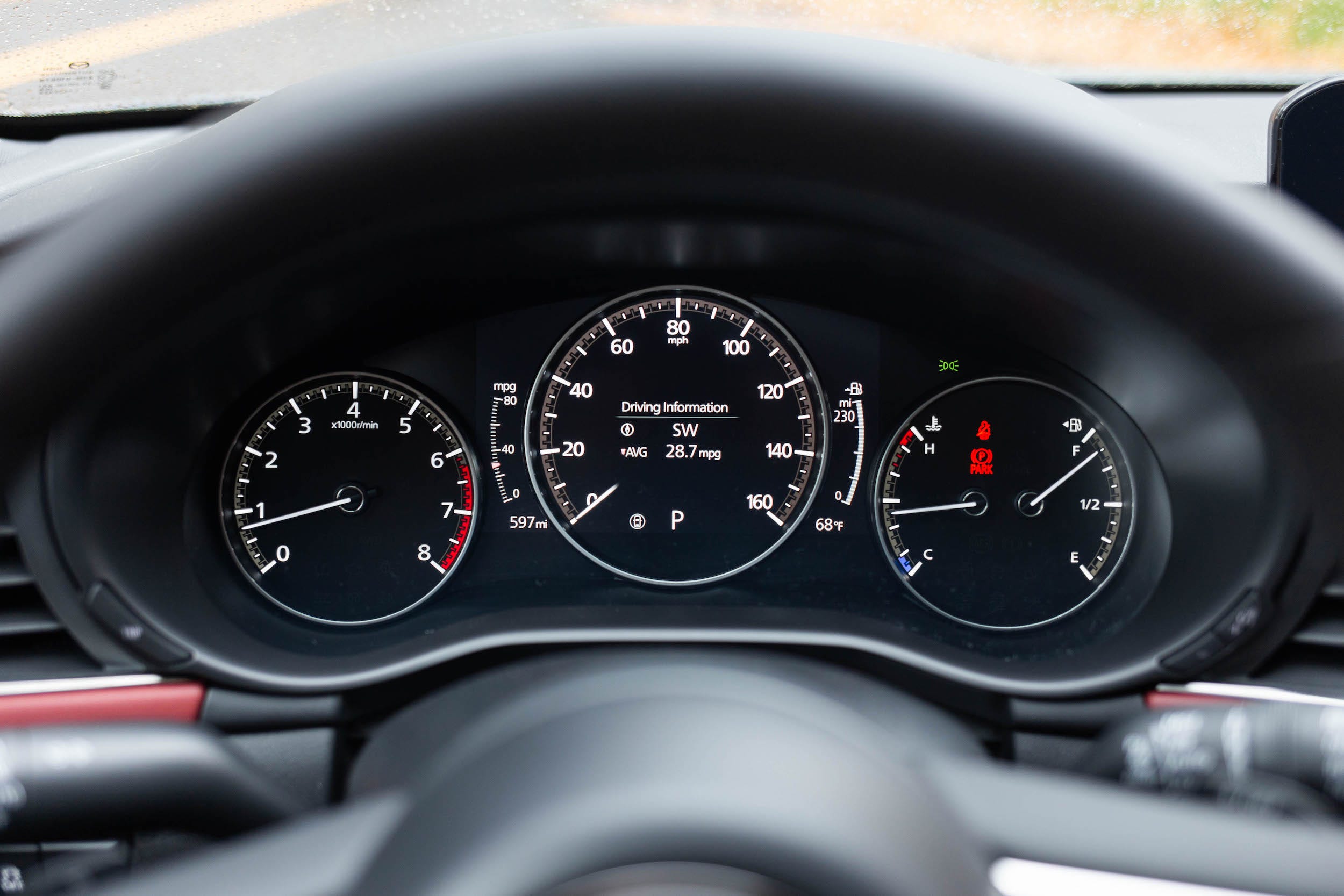 The 3 Turbo comes as either a sedan or a hatchback. It uses the 2.5-litre, turbocharged, four-cylinder SkyActiv-G engine, found in the larger CX-5, CX-9, and Mazda 6 models. 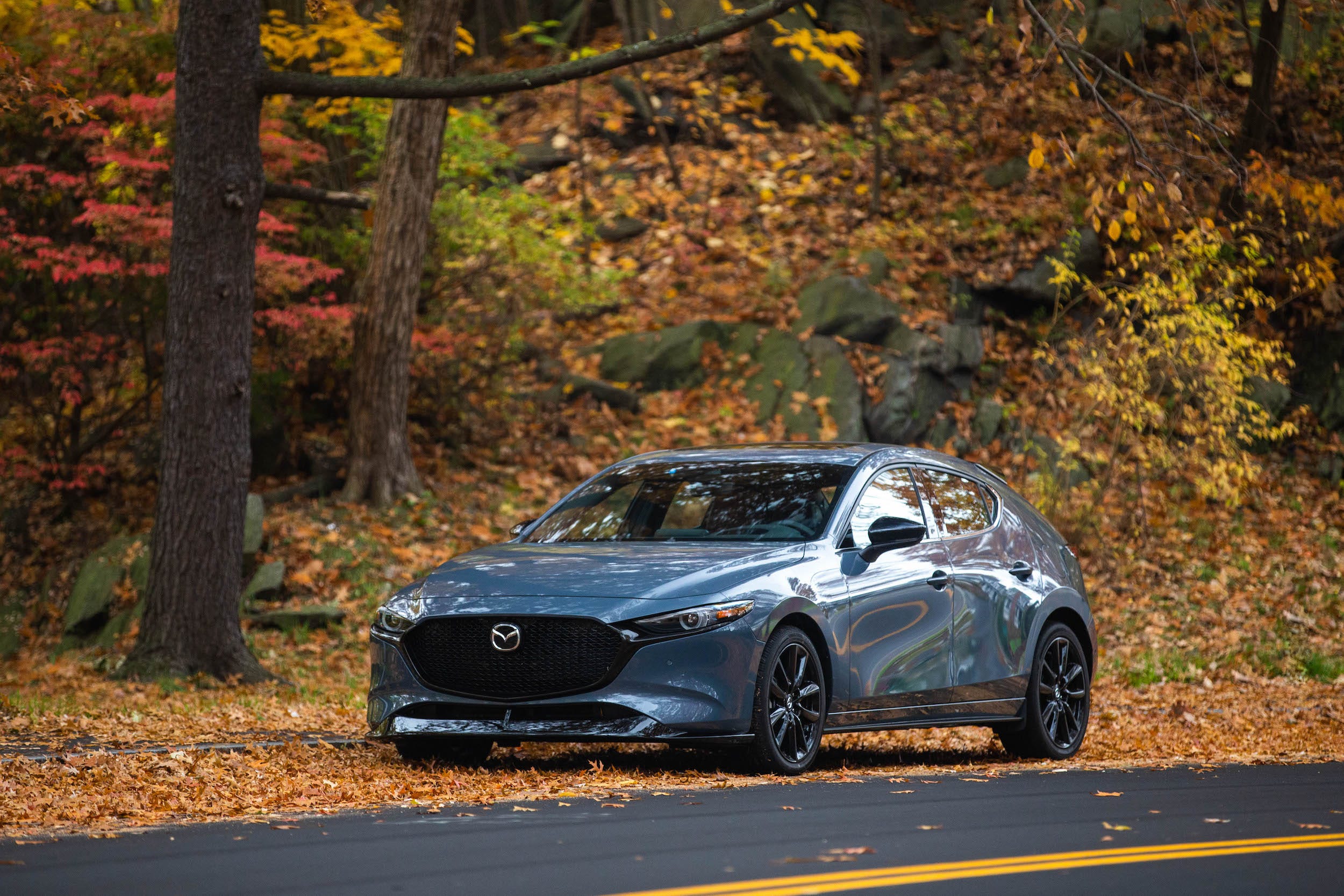 Cargo volume of the turbo sedan measures 13.2 cubic feet, while the hatchback measures 20.1 feet. If that last number looks familiar to you like it did for me, it’s because that’s the same amount of cargo volume that you’d get combined from a McLaren GT’s two trunks.

That’s more than you’d get with the single rear trunk in a Toyota Camry! Not bad for a little compact hatchback. 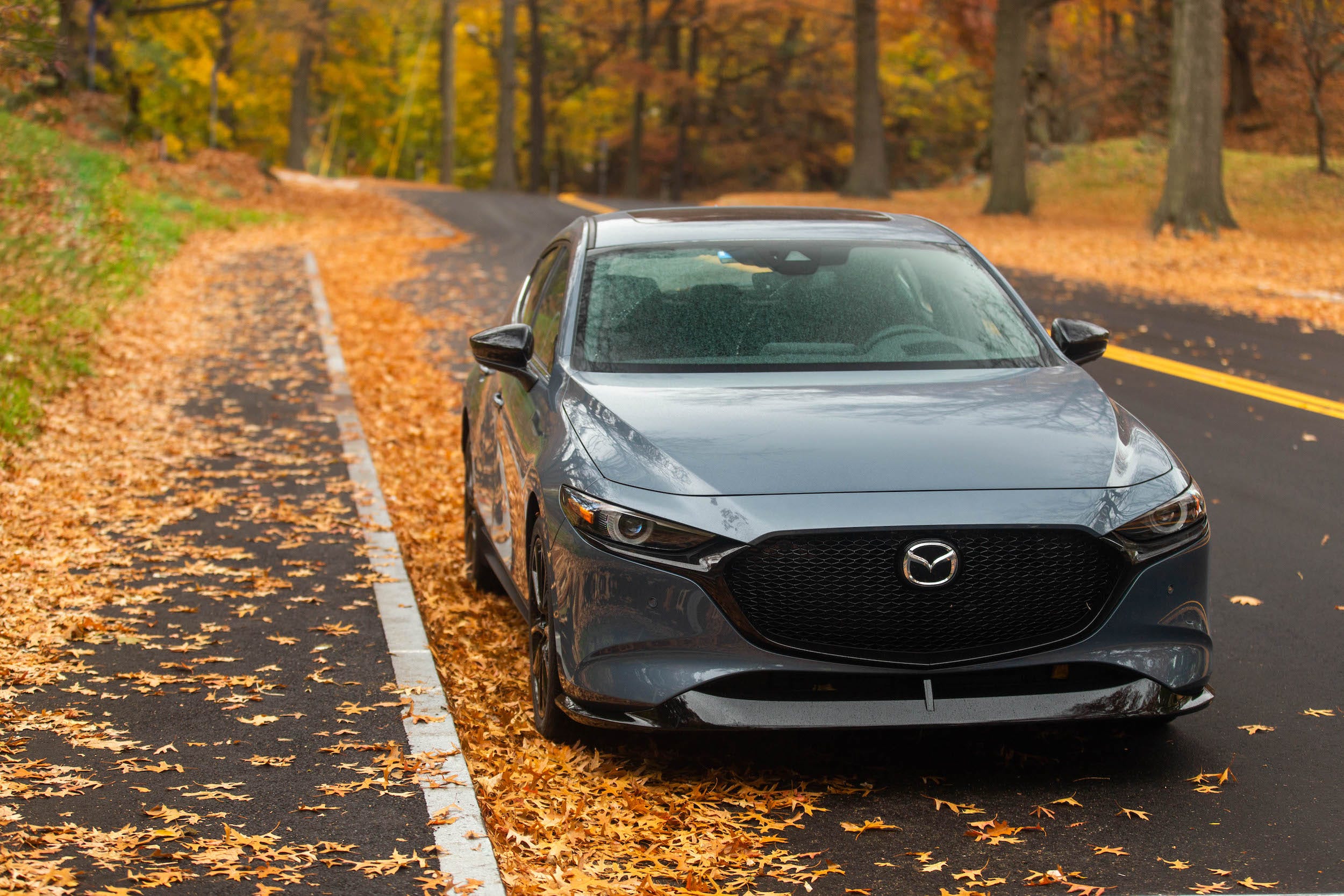 The Environmental Protection Agency estimates the hatchback 3 Turbo to get 23 mpg in the city, 31 mpg on the highway, and 26 mpg combined, and the sedan to return mostly the same. The car earned five stars on every single test in the National Highway Traffic Safety Administration’s crashworthiness evaluation.

The 2020 model also earned a Top Safety Pick Plus award with the Insurance Institute for Highway Safety â€” the highest safety award the agency has to offer. 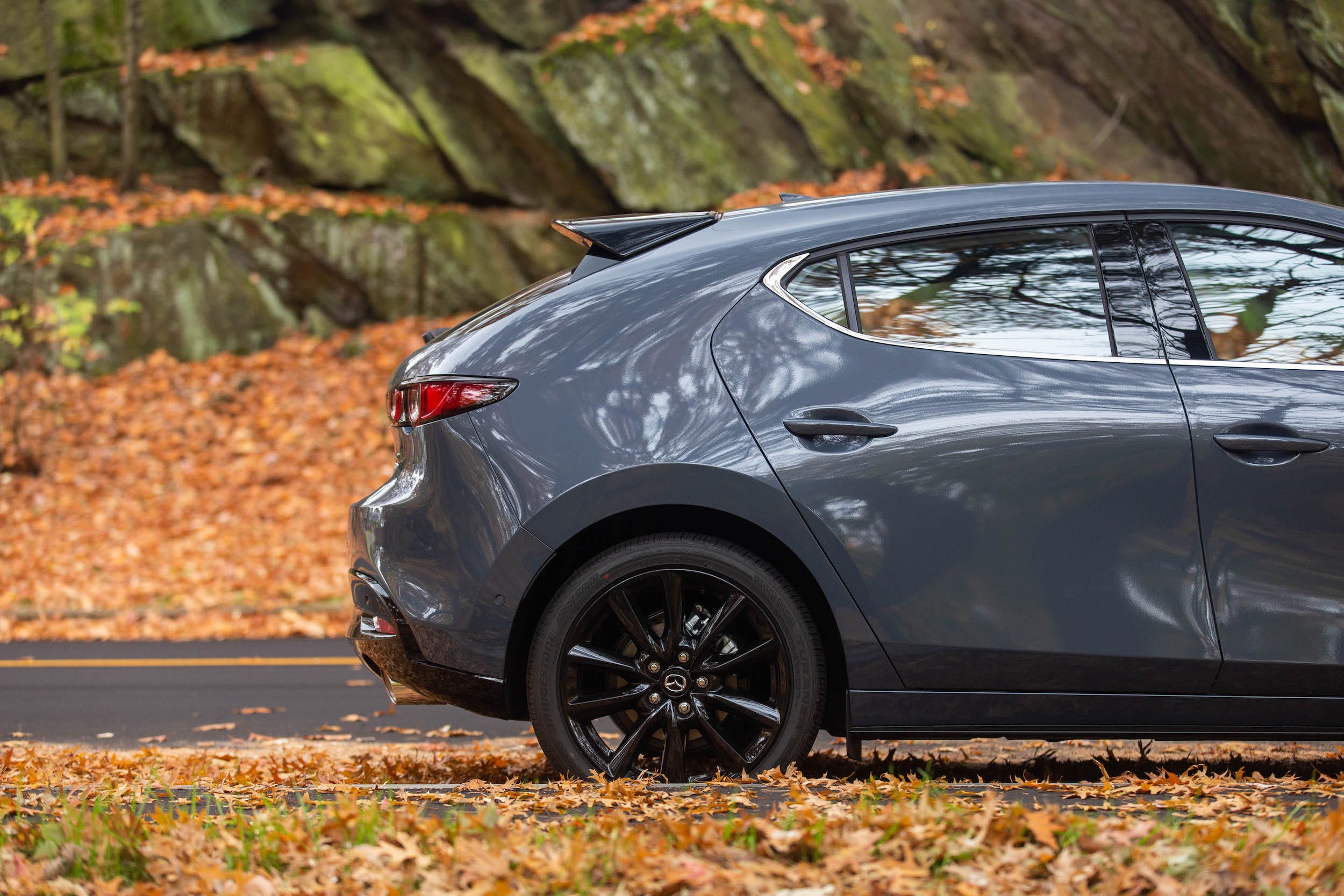 Personally, I thought the regular Mazda 3 was just fine. But if more power suddenly becomes an option, I obviously won’t say no.

Of the 3 Turbo’s newfound spunk, I can say this: It definitely feels much zippier! After the initial turbo lag wears off, the extra torque shoots the car forward like a cork. It’s punchy, lively, and inspires smiles all around. Maybe even a small laugh in the form of a forced exhale, too. 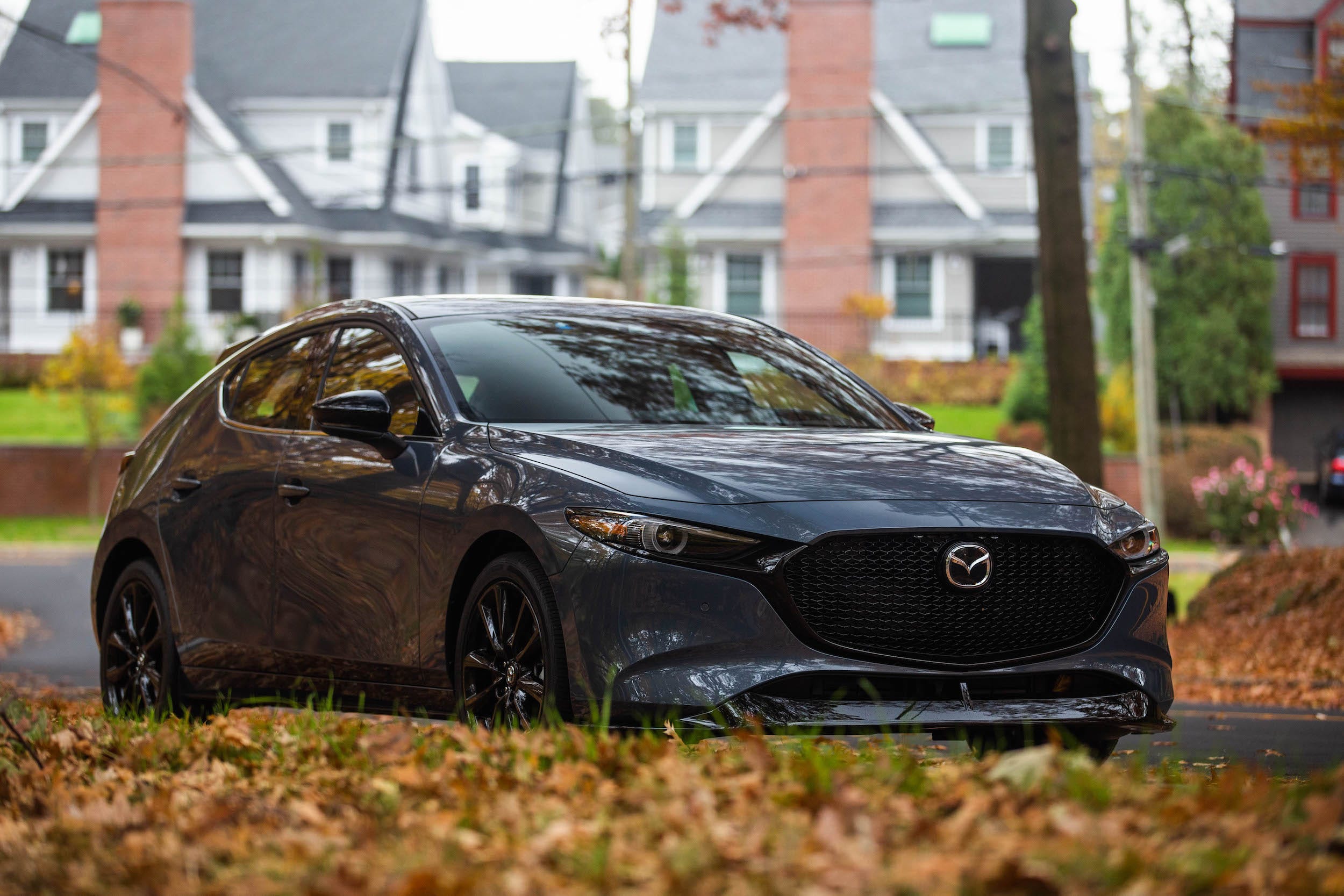 What’s great about this new turbocharged engine application is that it’s now powering a far lighter and smaller car in Mazda’s lineup. The 3 has always maintained good, light-footedness that made chucking it into corners at speed fun. With its intuitive steering, the car practically begged you to abuse it. At least a little bit.

Couple that energy now with more power â€” well, buddy, you’ve got yourself a darty little Fun Carâ”¢, especially in Sport mode. There’s more direct steering response and the transmission hangs out in a lower gear, keeping the power in a more readily accessible spot. 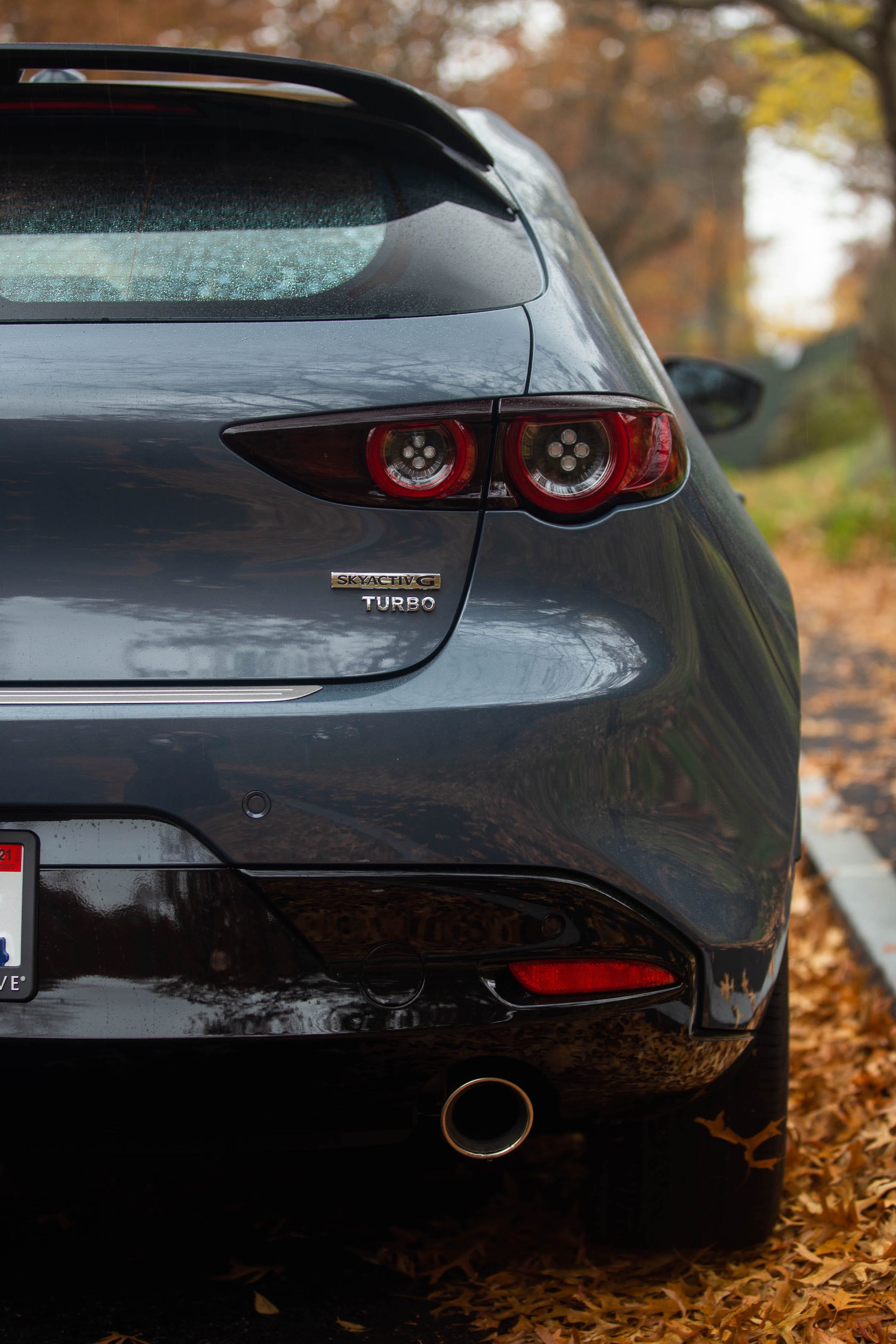 It doesn’t matter if you’re merging and passing on the highway or flicking the nose into a corner on some back road, the turbocharged engine has turned the 3 into a legitimate athlete, dancing on its toes, always at the ready.

Predictably, because the 3 Turbo is a new Mazda, the interior is also quite classy. My loaner came with buttery leather seats in a deep red colour and a fancy Bose sound system.

All of the switchgear was quality to the touch, too. The dial for selecting menu items clicked satisfyingly and the HVAC vents slid in their slots smoothly. 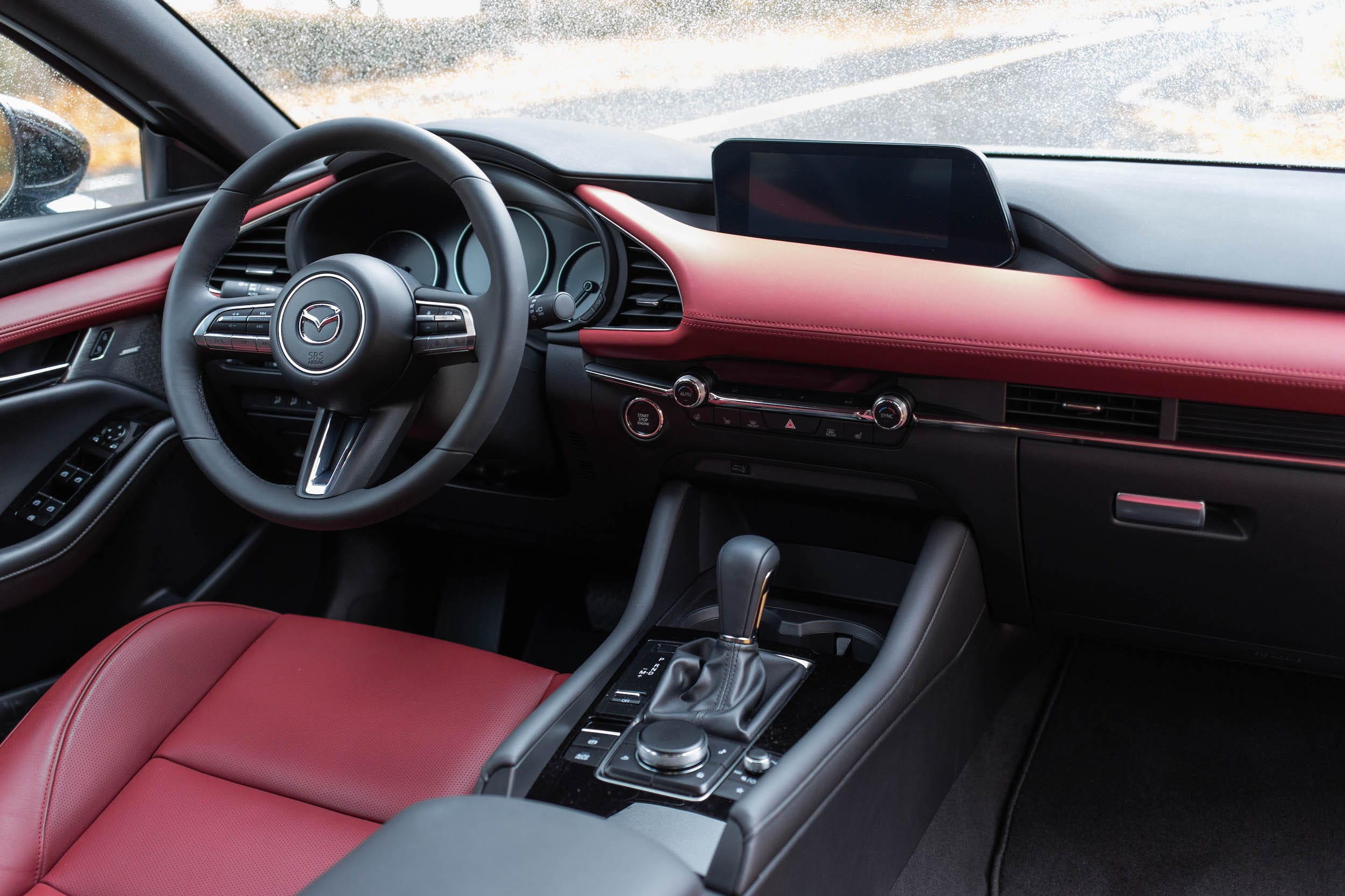 And the most beautiful thing of all? No! Touchscreens!

Oh, yes, friends. The 3 does not have a touchscreen. There’s a screen, but you have to use a dial to navigate it with. The rest of the radio and climate controls use buttons, switches, and dials. Alright, yes, using the navigation with a dial was frustrating â€” you’re painfully aware of how many letters and numbers are in an address â€” but conversely, fixing the climate didn’t mean I had to look away from the road to make sure I was hitting the right part of the touchscreen.

As God is my witness, the interior of the 2021 Mazda 3 Turbo was my happy place. 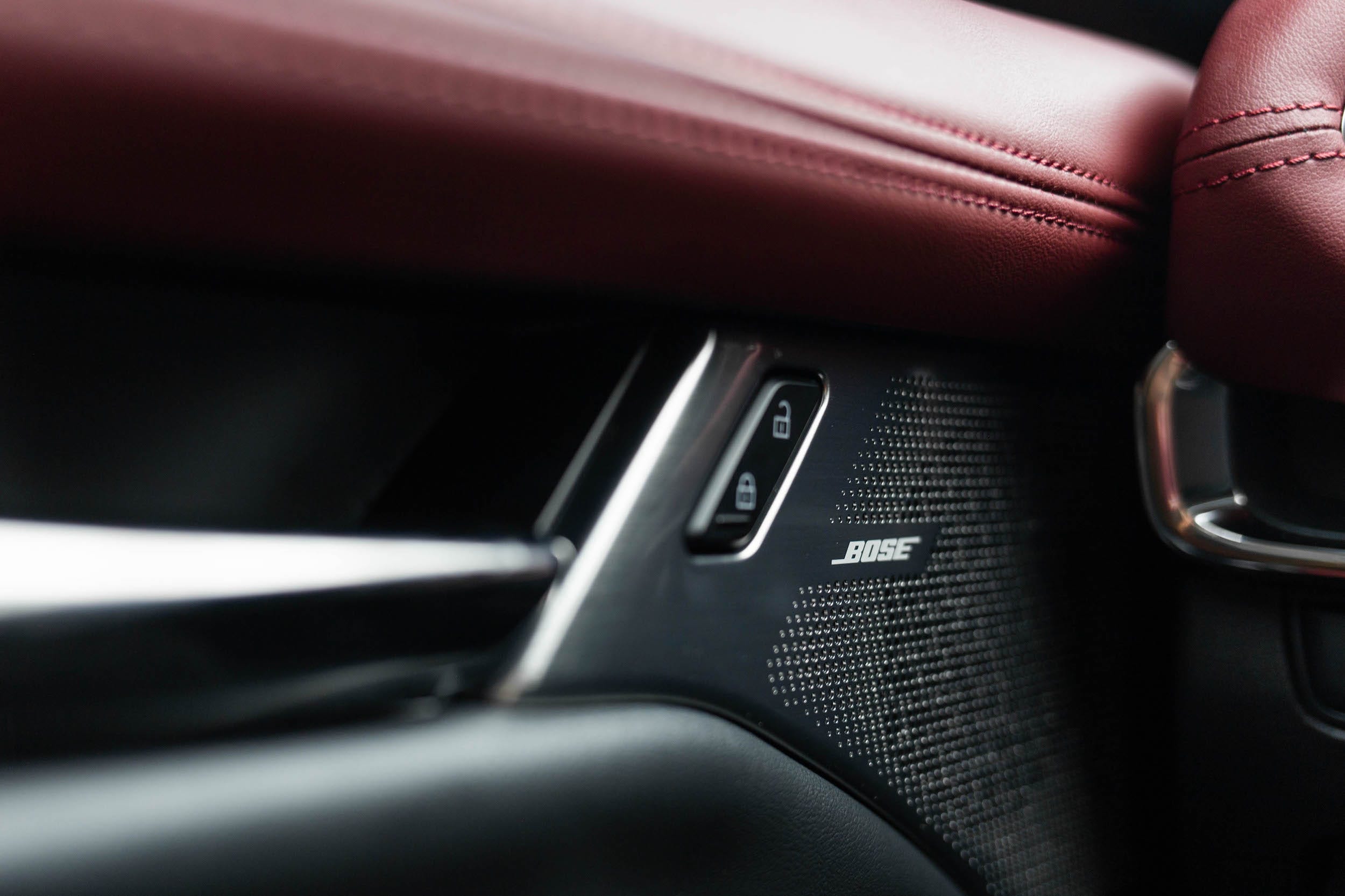 What falls short: No manual transmission

I elected to test out the 3 Turbo hatchback because hatchbacks are awesome. Unfortunately, as stylish as the car is from the outside, those thick C-pillars made over-the-shoulder glances difficult.

All in all, it’s not a terrible loss, since the mirrors do their job and there are plenty of proximity sensors that scream at you if you try and merge into another car.

Still, I like to look. Proximity sensors can theoretically fail and by the time you find out that they have done so, it’s already too late. 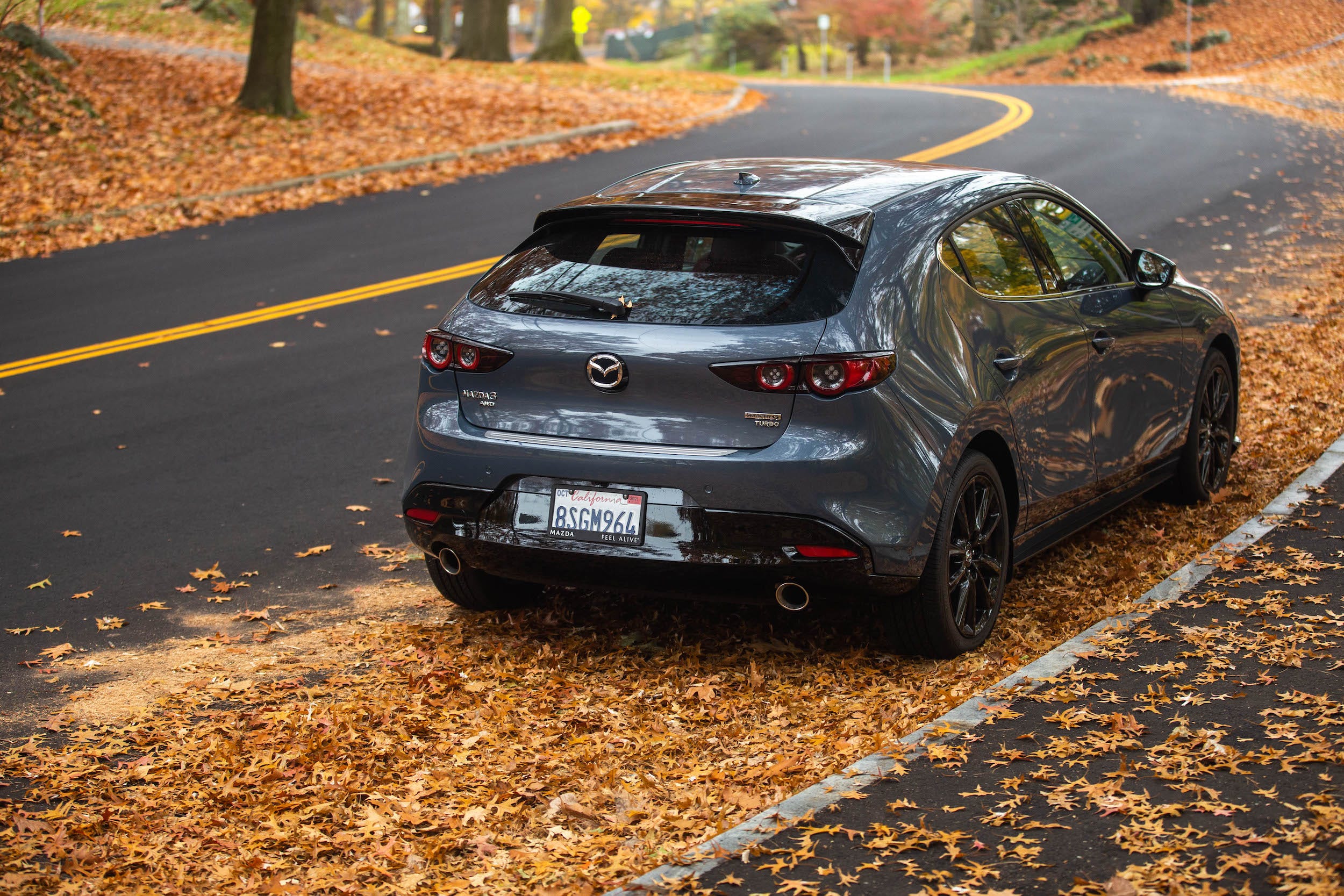 I’m a hopeless nerd, so I shamelessly wished the turbo model had a manual option. It was the only missing ingredient in what would have been a perfect turbo, all-wheel drive, sporty hatchback sundae.

When pressed about the absence of a manual in the 3 Turbo, a Mazda engineer gave a few reasons during a roundtable interview. The engineer said this engine has never been paired with a manual before and it would take a lot more work (see also: time and money) to attach one. There were packaging constraints to consider. 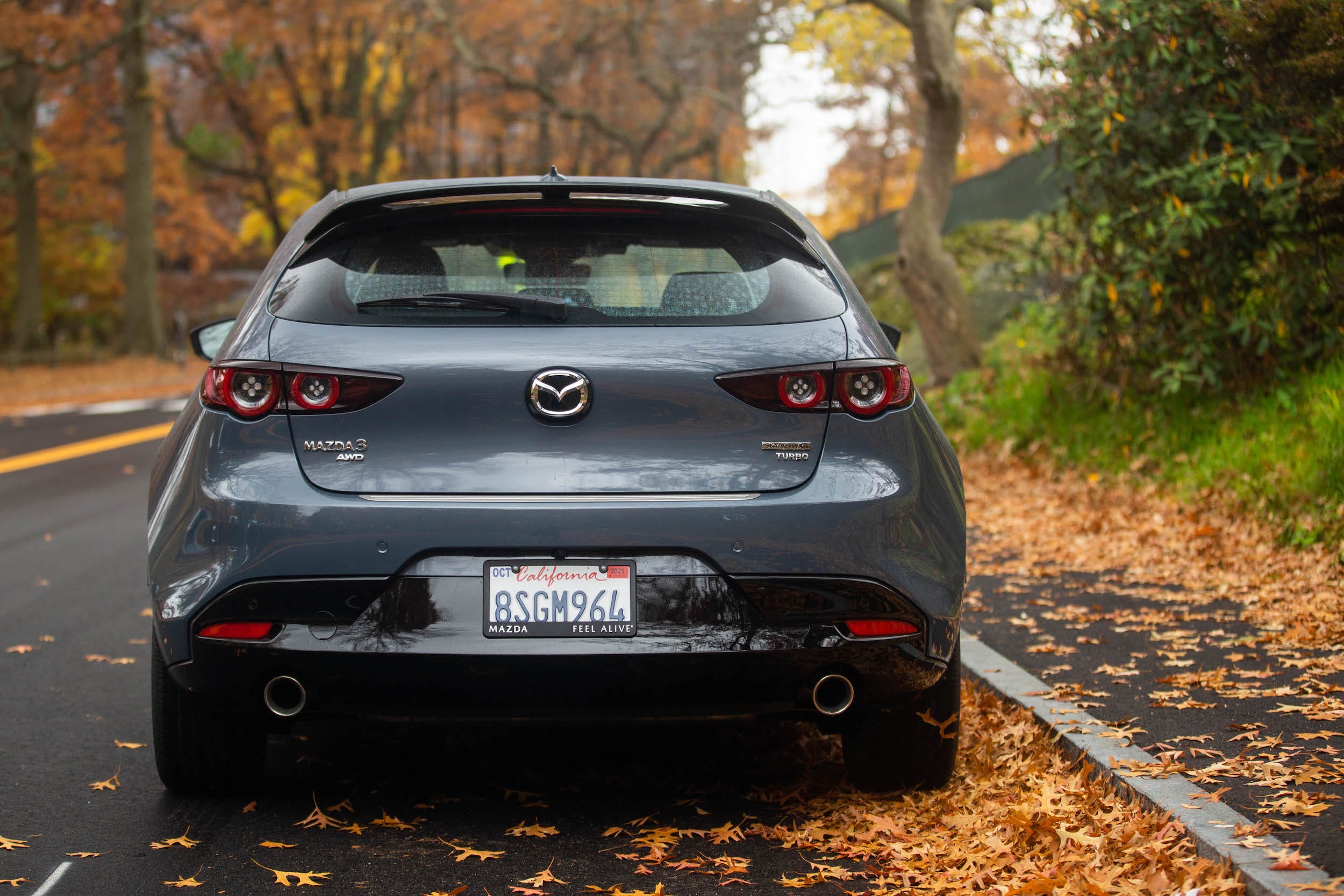 Plus, the number of people who buy manuals is apparently so woefully low that it just didn’t make any business sense to go through the trouble of including the option at all.

That said, there’s nothing wrong with the six-speed automatic transmission. It does its job, doesn’t get in the way of itself or you, and is reasonably intuitive in Sport mode. 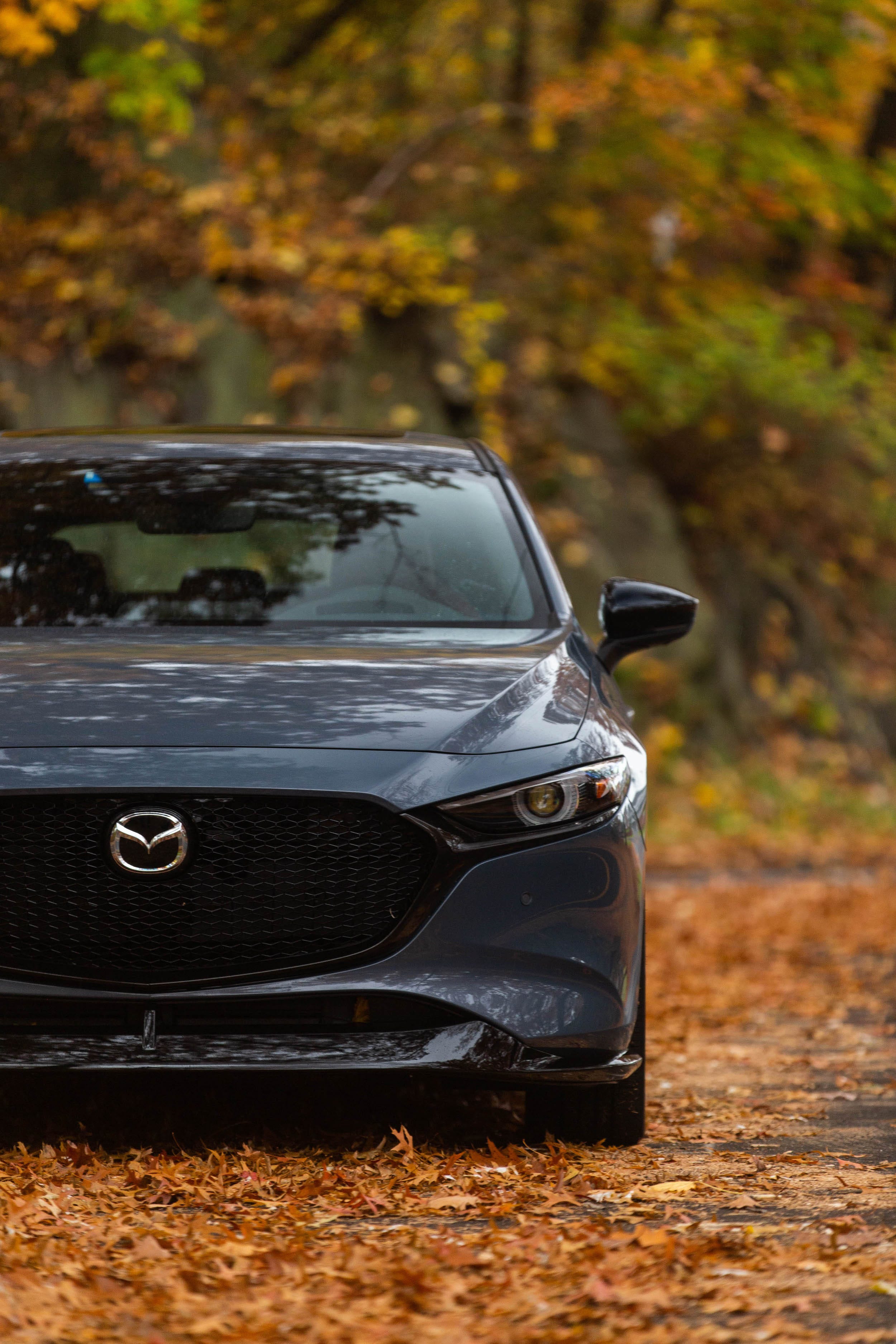 In the same roundtable, Mazda backed up those impressions, saying the system assumes you’re on a twisty mode when you put it in Sport mode. It anticipates that if you brake for a turn, you’re going to want to power out of that corner, hence the transmission’s tendency to stay in a lower gear.

How the 3 Turbo compares to its competitors: Priced like an Audi or Mercedes

The non-turbocharged Mazda 3 competes with other compact cars such as the Subaru Impreza, Honda Civic, Toyota Corolla, and Hyundai Elantra. With the introduction of the turbocharged engine, added performance, all-wheel drive, and upmarket interior, the 3 Turbo can set its sights a little higher and target the likes of the Acura ILX, Mercedes-Benz A-Class, and Audi A3. 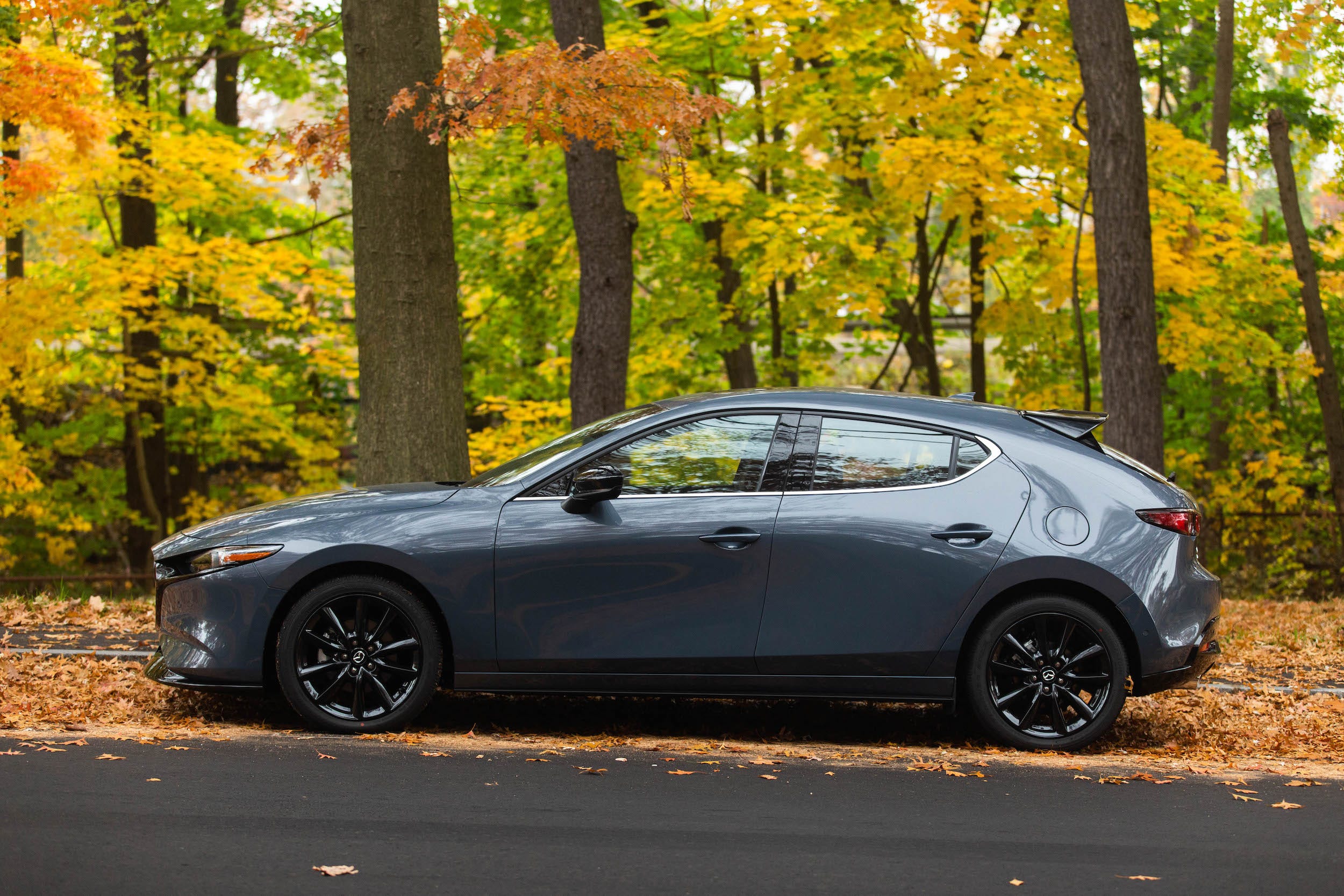 As a comparison, the Mercedes-Benz A-Class starts at $US33,650, the Audi A3 starts at $US33,300, and the Acura ILX starts at $US25,950. Keep in mind, though, that those three do not come as hatchbacks and they all start with far less power than the 3 Turbo. 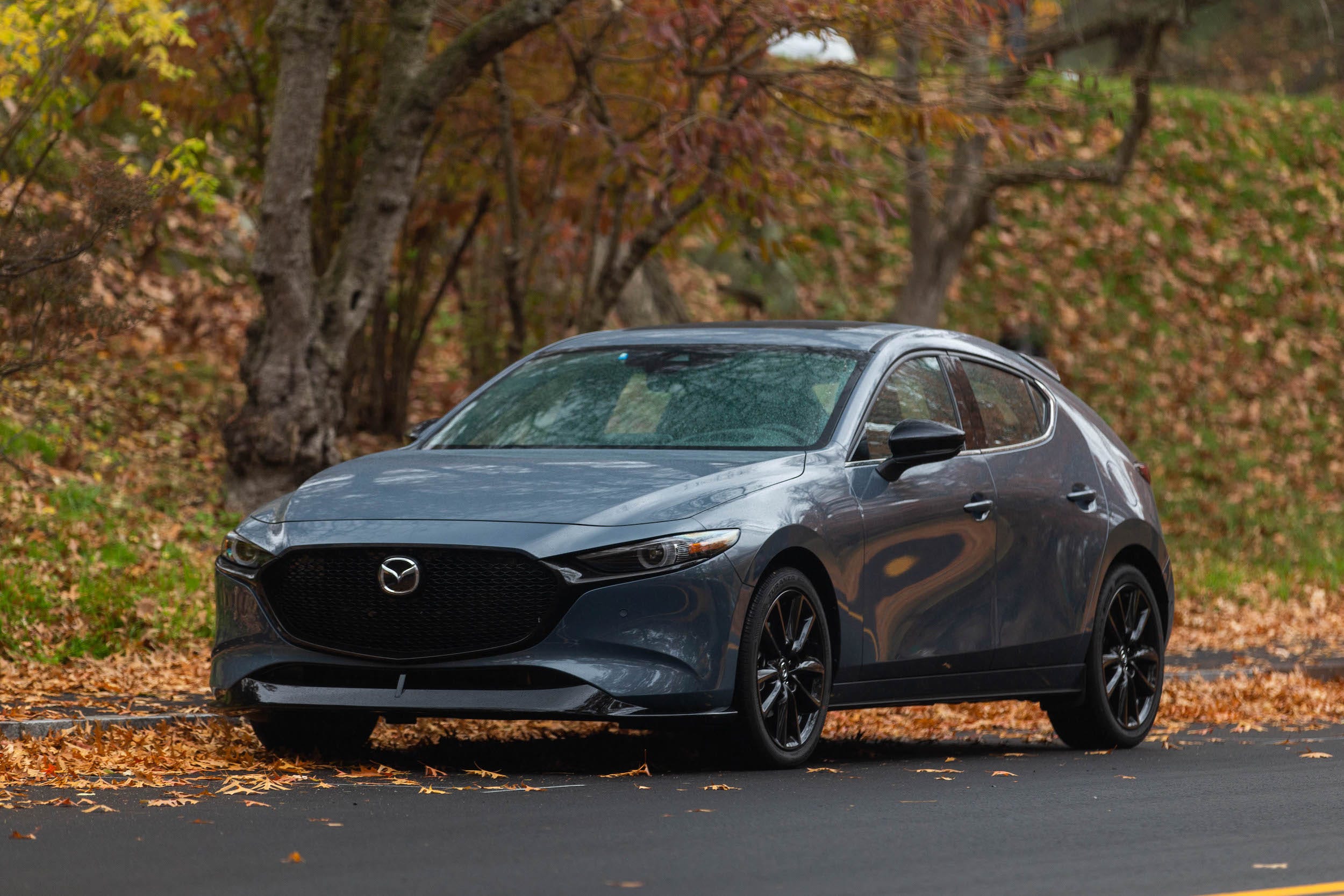 Spiritually, I’d say the 3 Turbo is more akin to sportier versions of the other compact cars. The power is there, certainly, as is the hatchiness, but the manual transmission available on the Honda Civic Si, Hyundai Veloster N, and Volkswagen Golf GTI make for very compelling counterarguments.

Our impressions: That’s (not that) hot 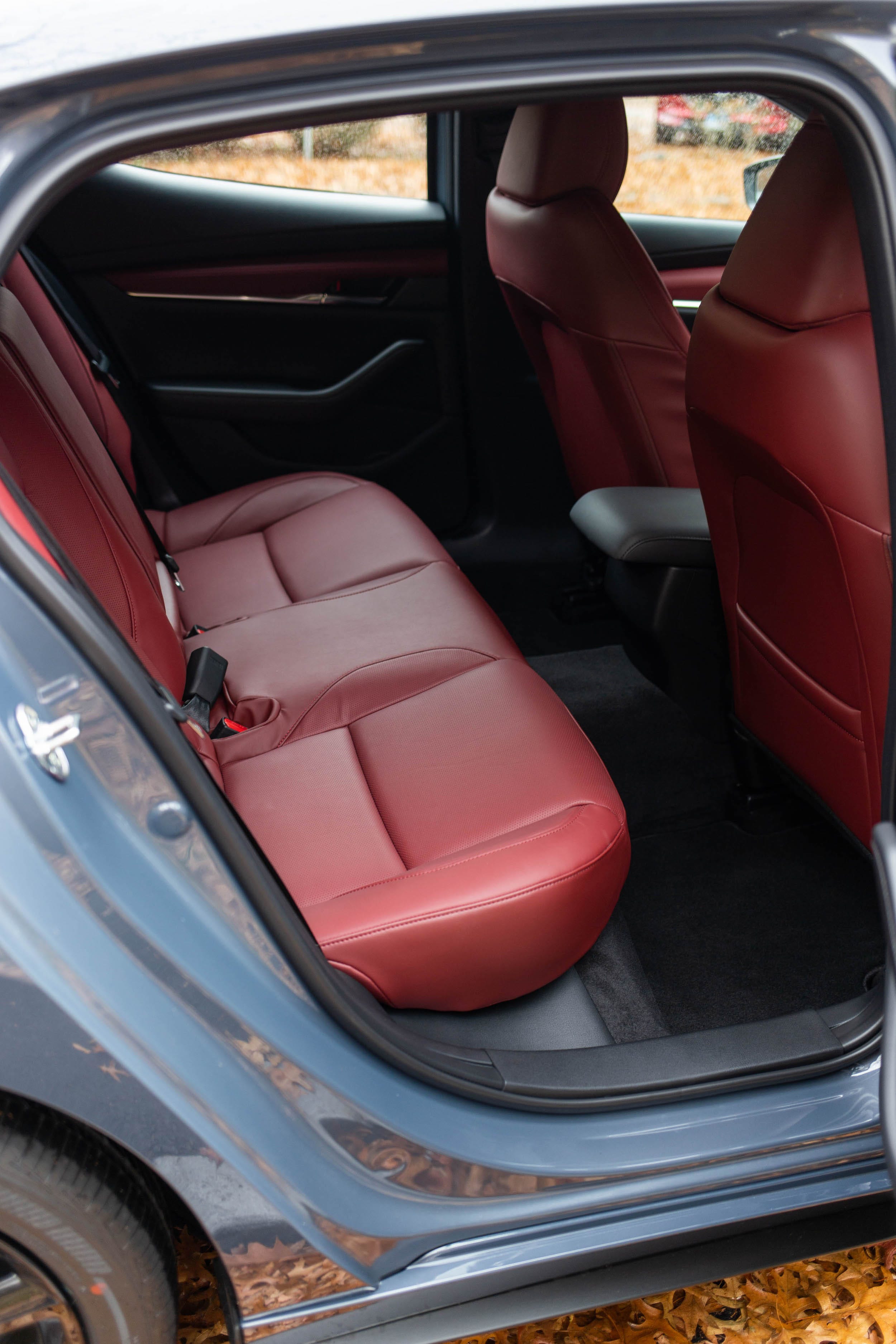 Though it has all the dressings of a hot hatch, I’m still hesitant to call the 3 Turbo a hot hatch. It’s certainly not a cold hatch â€” more like a warm hatch. A Goldilocks hatch. And the omission of a manual transmission isn’t the only thing that’s making me feel this way.

See, other hot hatches â€” specifically, the Honda Civic Type R and the Hyundai Veloster N â€” are an assault on the senses. Not only do their exteriors have dramatic wings and scoops, but their exhaust notes burble, crack, and pop. Sometimes they even have electric blue seat belts. There is something exciting about them before you even climb into them. They give you something to talk about.

That extra flair is missing from the 3 Turbo. Don’t misunderstand â€” the thing is charming to drive, and super entertaining to flick around obstacles like other cars. And it’s quite quick! Under its sensible exterior, the 3 Turbo is a joyous time.

But it’s also quieter in its abilities and what it offers; more refined, much less shouty and in-your-face than the others. After all, “hot” hatches can be sophomoric and therefore counter the new, premium attitude Mazda hopes you’ll have about its products. 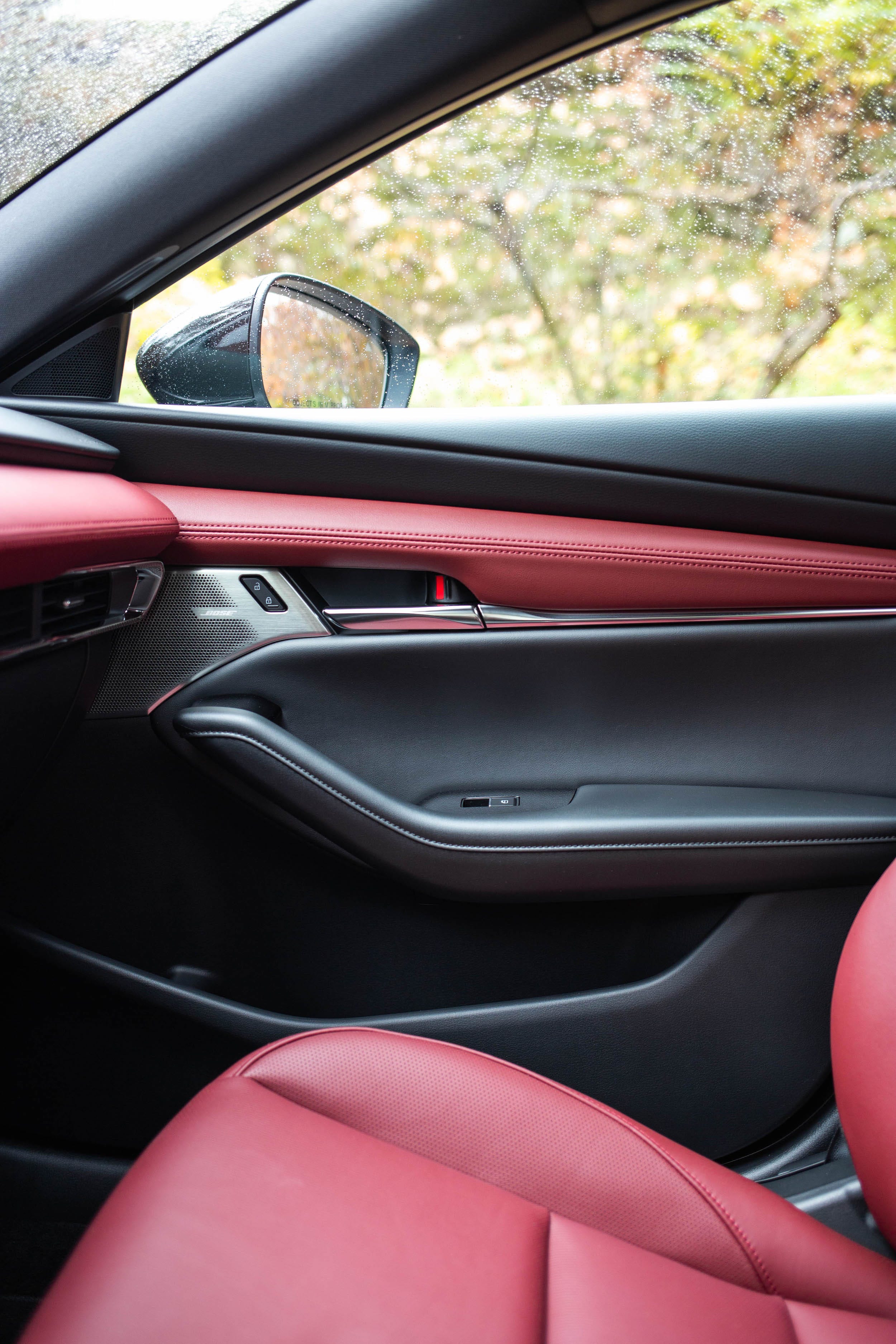 This is the car for the person who wants a racy little sedan or hatchback for weekend canyon carving but doesn’t want to be judged too much when they pull up to work in it on Monday morning.

If you can get over a Mazda with a Mercedes price tag, of course. 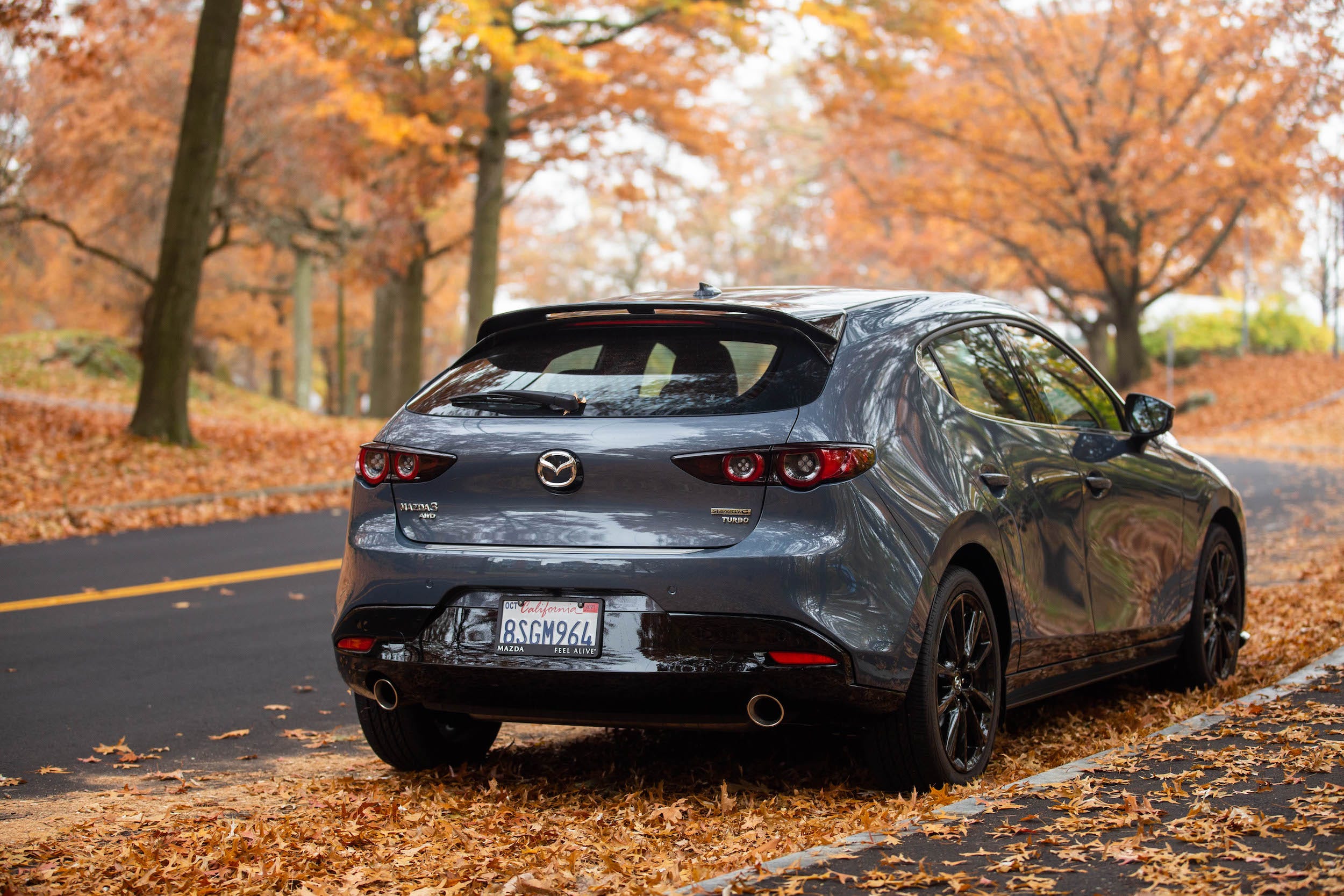