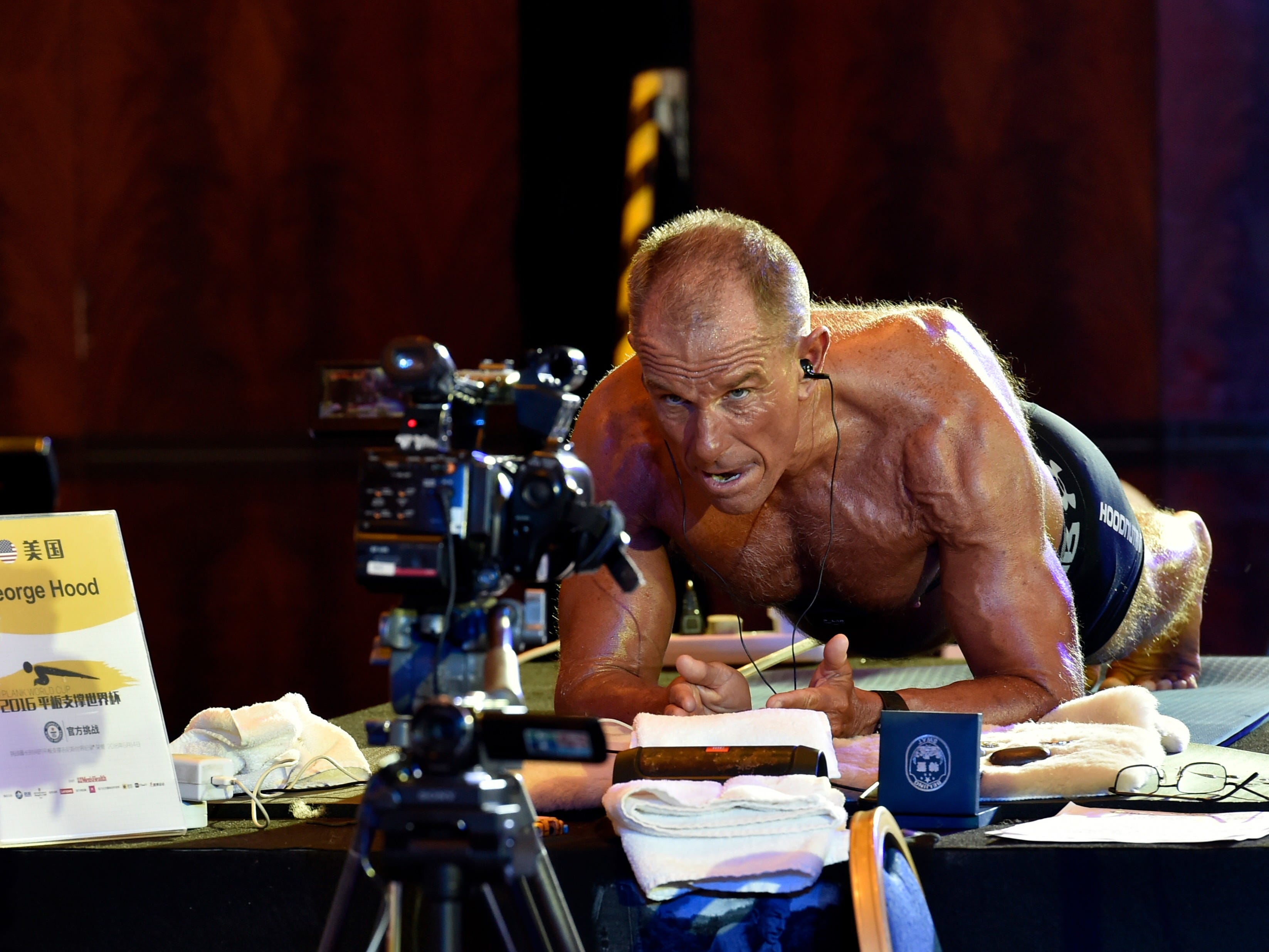 Every year, people set out to push the boundaries of the human experience.

Luckily, Guinness World Records is there to make sure it wasn’t all for nothing – whether that is paying top dollar for a famous item, playing a musical performance underground, or creating a 70-layer bean dip.

Take a look at some of the wildest and most entertaining world records that have been broken in 2020 so far.

Two women broke the record for the fastest trip around the world on a tandem bike. 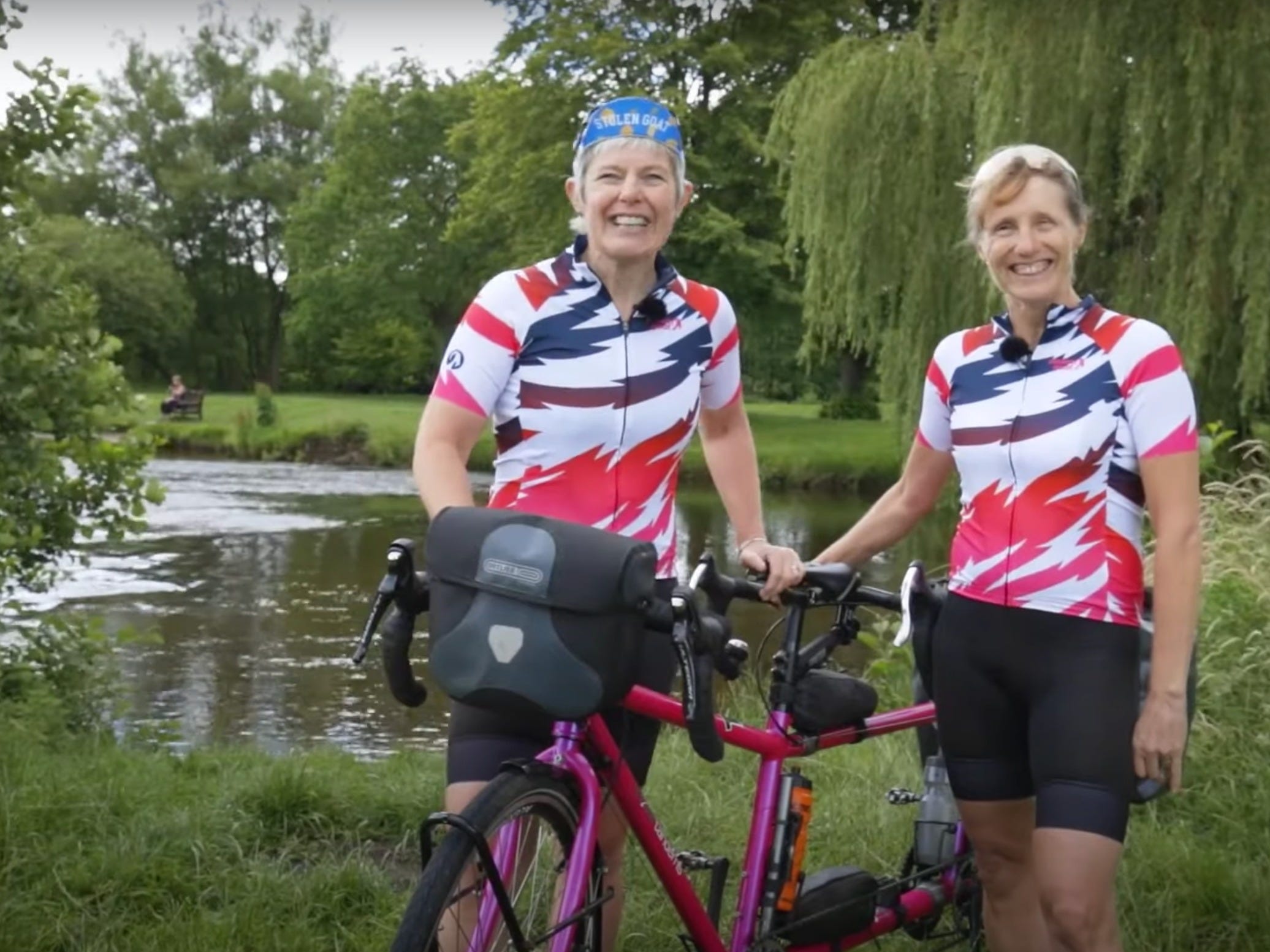 Cat Dixon and Raz Marsden left England in June 2019 on their tandem bike with one goal in mind: to bike across the world faster than anyone had before. After 263 days, 8 hours and 7 minutes, 25 countries, and 18,263 miles, the pair broke the world record, according to Guinness World Records.

“We have highlights from every country that we visited and would definitely return to see many- although maybe at a slower pace,” Dixon and Marsden said in a joint statement.

The two even had to battle monsoons, heatwaves, and the potential of borders closing amid the outbreak of the coronavirus pandemic.

“We just got on with it and loved it all. It was important to keep laughing, and we did,” they said.

The world’s deepest underground concert occurred this year at 6,213 feet below sea level. 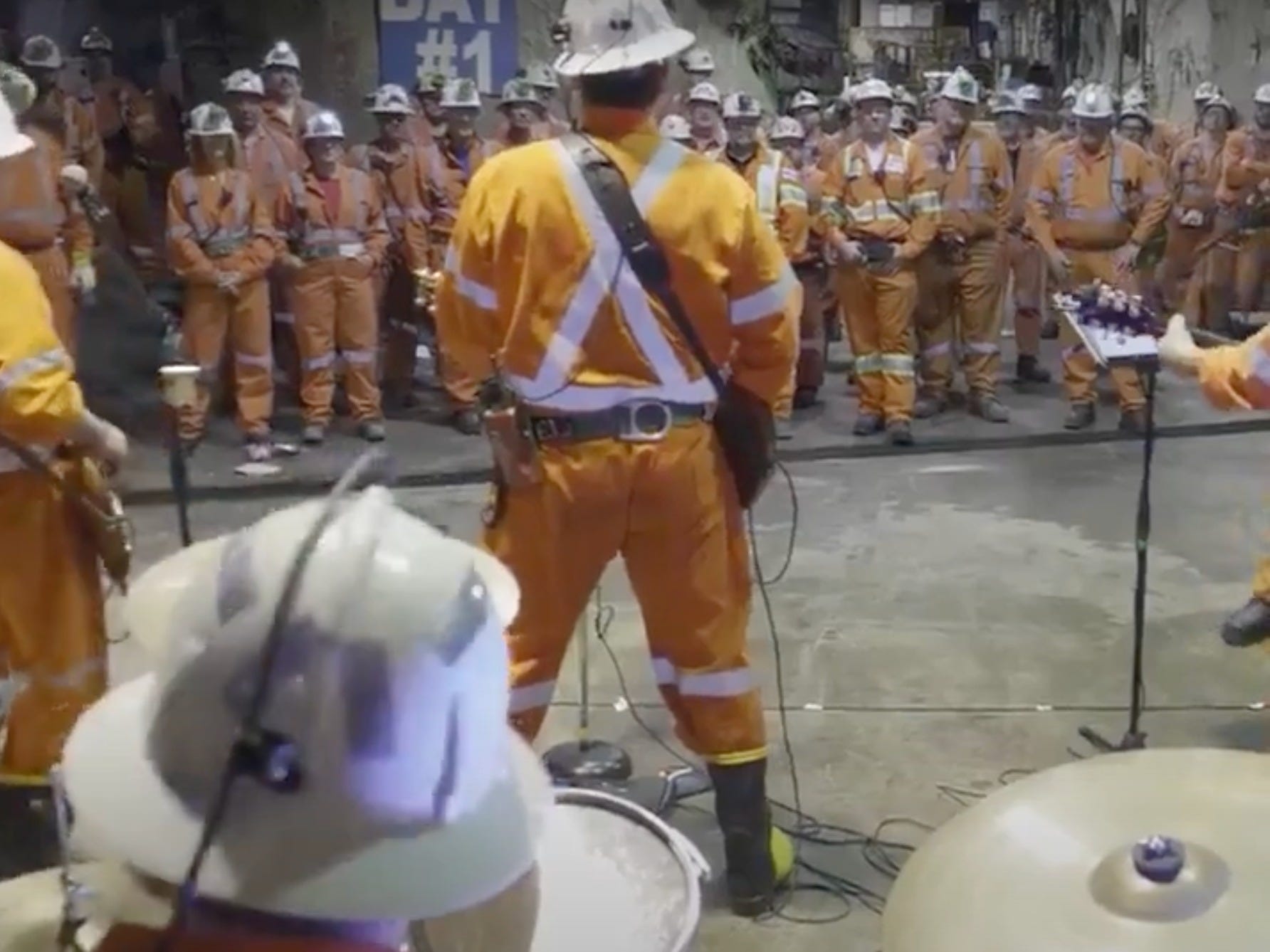 The Shaft Bottom Boys, a band of four musicians, performed a 50-minute set down in the Vale’s Creighton Mine in Sudbury, Ontario, this year. The mine is 6,213 feet below sea level, making the performance the deepest concert underground, according to Guinness World Records.

The band was decked out in official uniforms and hard hats to protect themselves during the performance, but that didn’t stop the concertgoers from dancing and tapping their feet along to the music.

A teacher in Japan broke the record for the most udon noodles eaten in under 3 minutes. 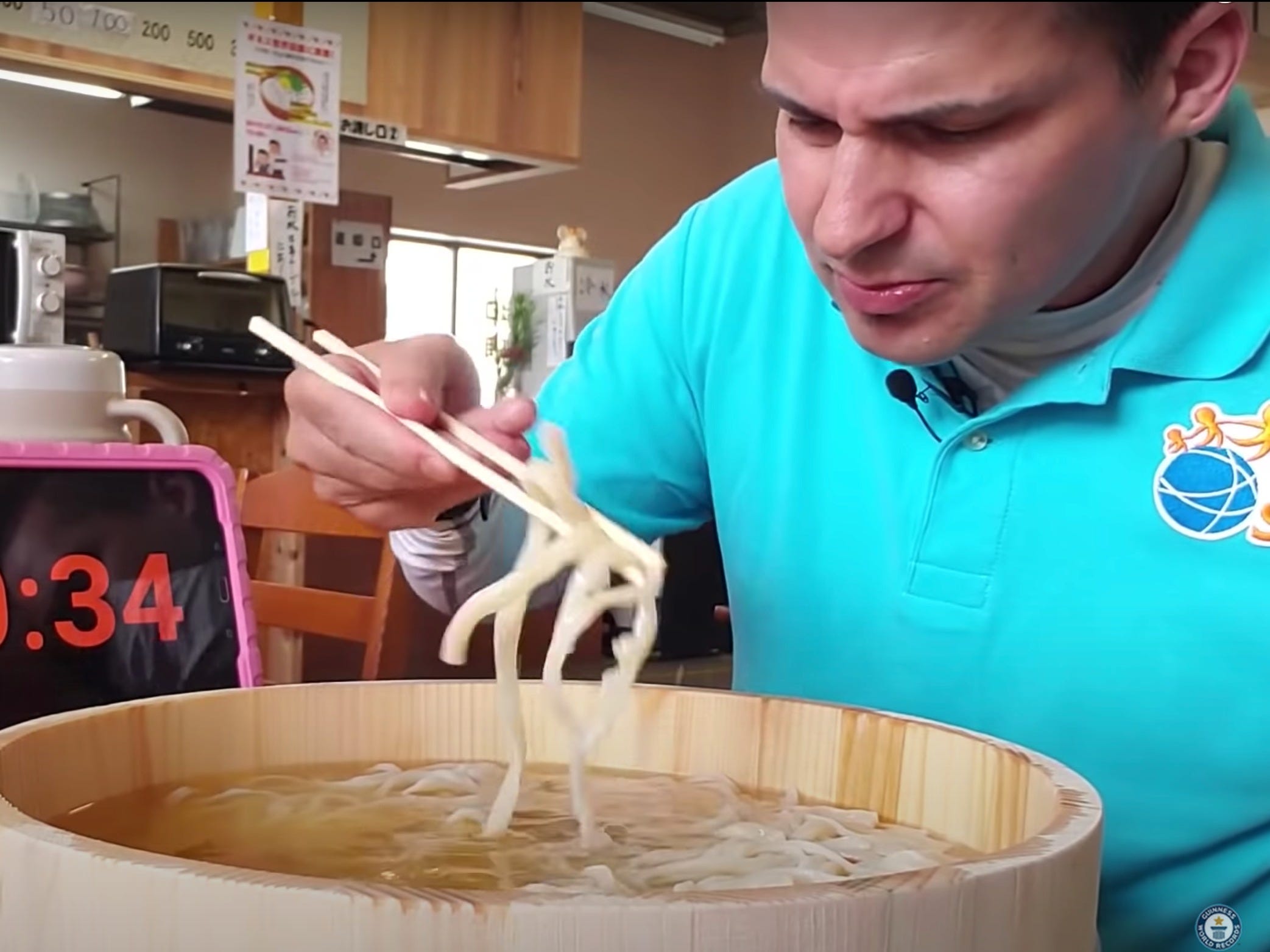 Jeremy Lanig decided to celebrate his 40th birthday a bit differently than most. Lanig, who lives in Takamatsu, Kagawa, Japan, ate more udon noodles than anyone in history in three minutes.

His record-breaking bowl had 39 ounces of noodles, which is equivalent to about 10 normal bowls of udon noodles. 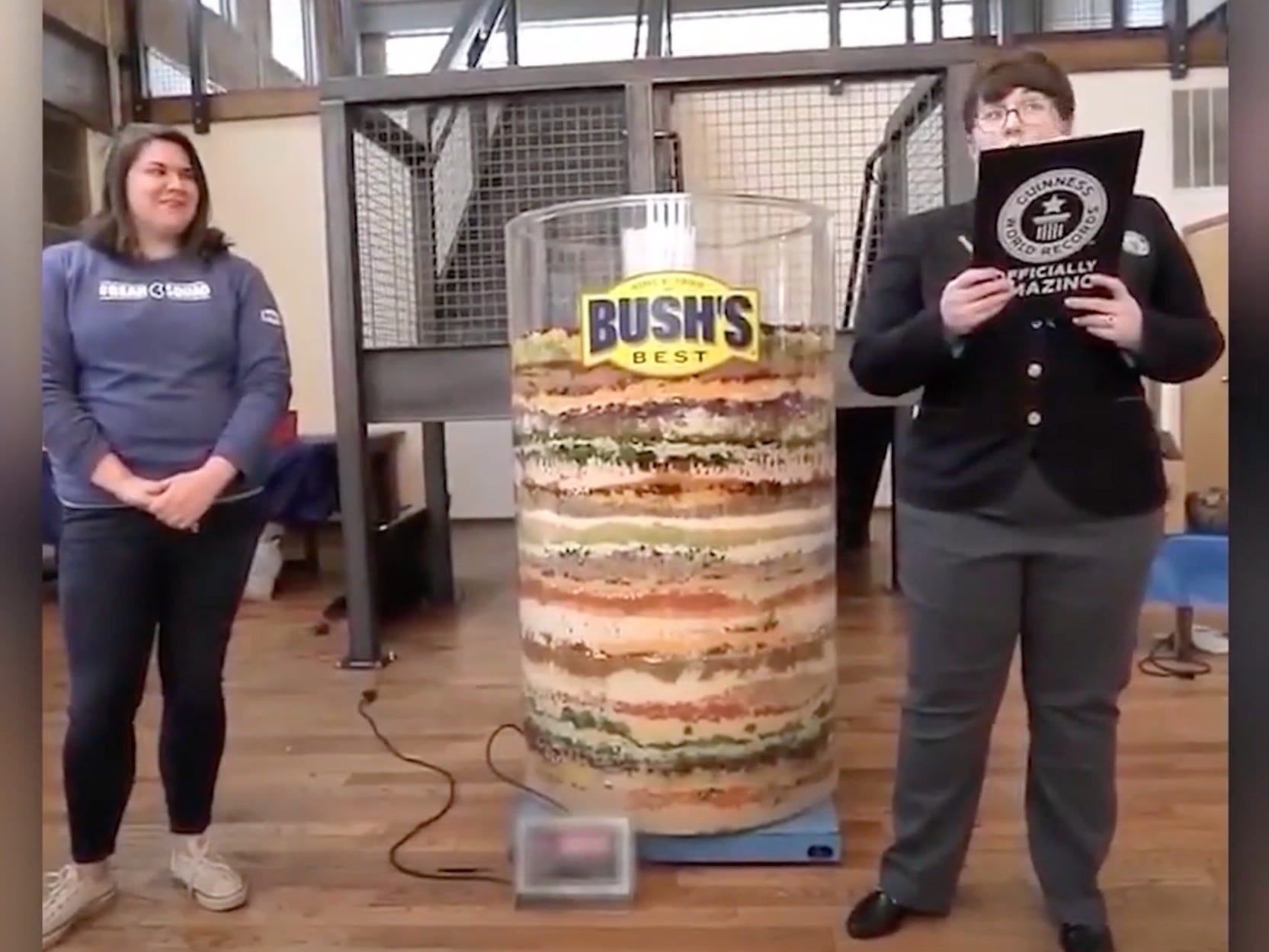 To celebrate the Super Bowl this year, Bush’s Beans celebrated by taking the usual seven-layer dip up a notch. The company built a record-breaking 70-layer dip, taking the title of “world’s largest layered dip.” It took two days to construct the 1,087-pound snack, which included veggies, Buffalo sauce, and loaded baked potatoes.

“Every year at this time we see an increase in searches for recipes, so this year we wanted to put a real twist on the traditional dip and do something fun for our fans while also showcasing the versatility of Bush’s Beans through a wide range of recipes included in the 70-layer bean dip,” Kate Rafferty, consumer experience manager at Bush’s, told Guinness World Records.

One woman earned the title of “most cinema productions attended” after seeing “Bohemian Rhapsody” over 100 times. 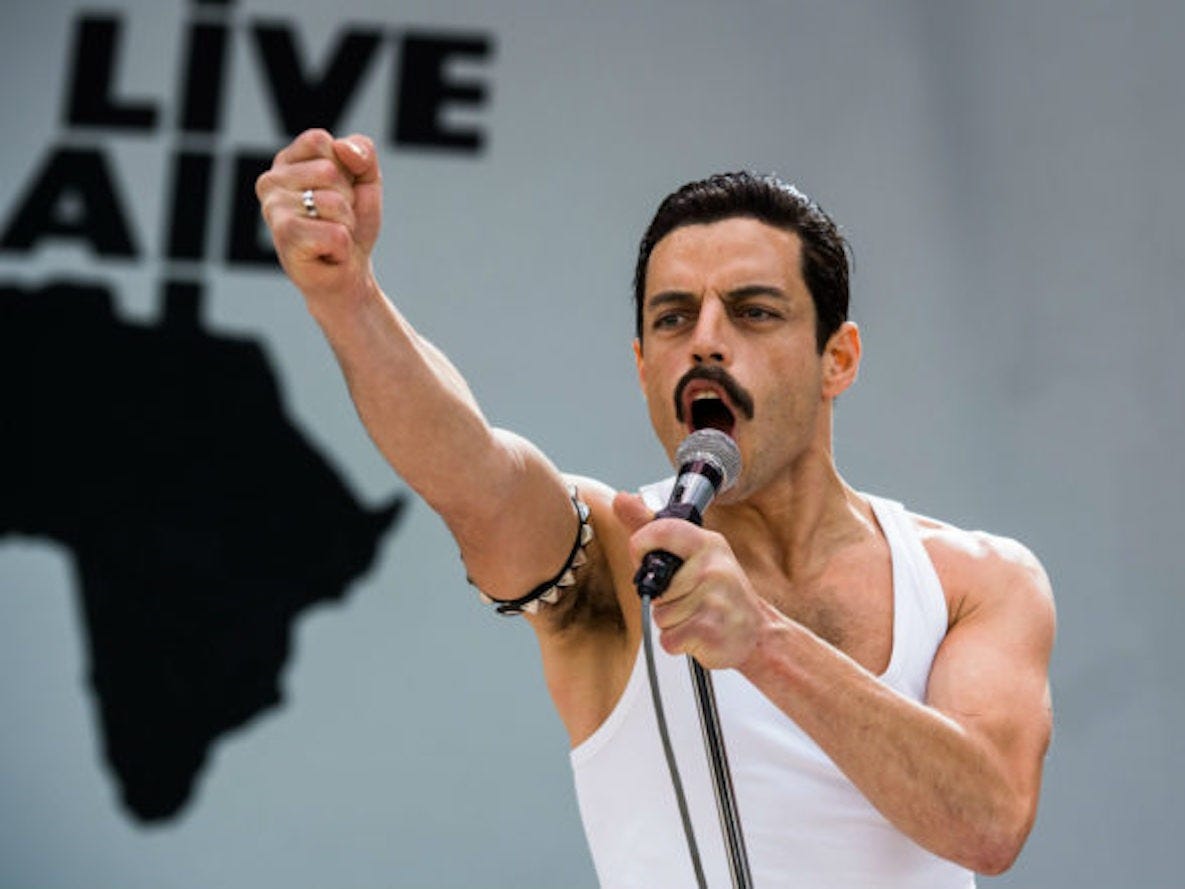 Joanne Connor, who lives in Redcliffe, Brisbane, discovered a new-found passion when she first watched “Bohemian Rhapsody” in theatres. She became so enamoured with the Queen biopic that she saw the film 107 more times. This year, she earned the Guinness World Record title of “most cinema productions attended – same film.”

“I love this movie. It is the best I have ever seen,” Connor told Guinness World Records. “It is such a ‘feel-good’ movie and takes those of us that weren’t there right to Wembley Live Aid. Also doing it to continue the legacy of the legend, Freddie Mercury and the music of Queen.”

A 10-year-old boy is being called a maths genius after solving 196 maths questions in one minute. 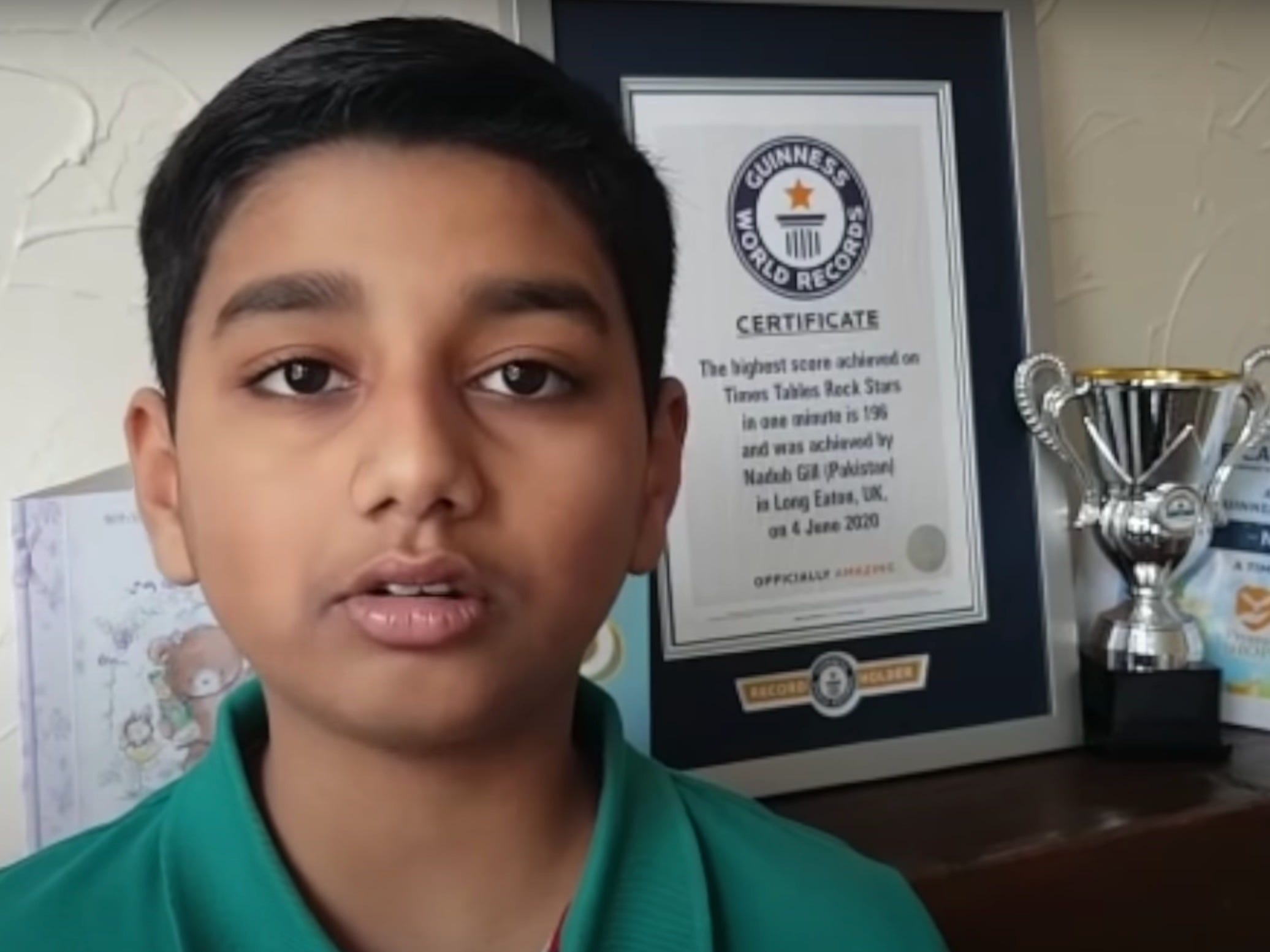 Nadub Gill is a 10-year-old who has always been great at maths, but this year, he proved just how much of a genius he really is. Gill was one of 700 children to try the Times Tables Rock Stars, which challenges students to answer as many multiplication and division questions as they can in one minute. He answered 196 correct, which is three answers every second.

“I am very thrilled and excited to achieve this title. It is like a dream,” Gill told Guinness World Records. “I am thankful to my school and my teachers, who encouraged me to attempt this record. They encouraged me a lot and I think they have played a big role in my success.”

The world’s largest flip book is now the size of a tennis court. 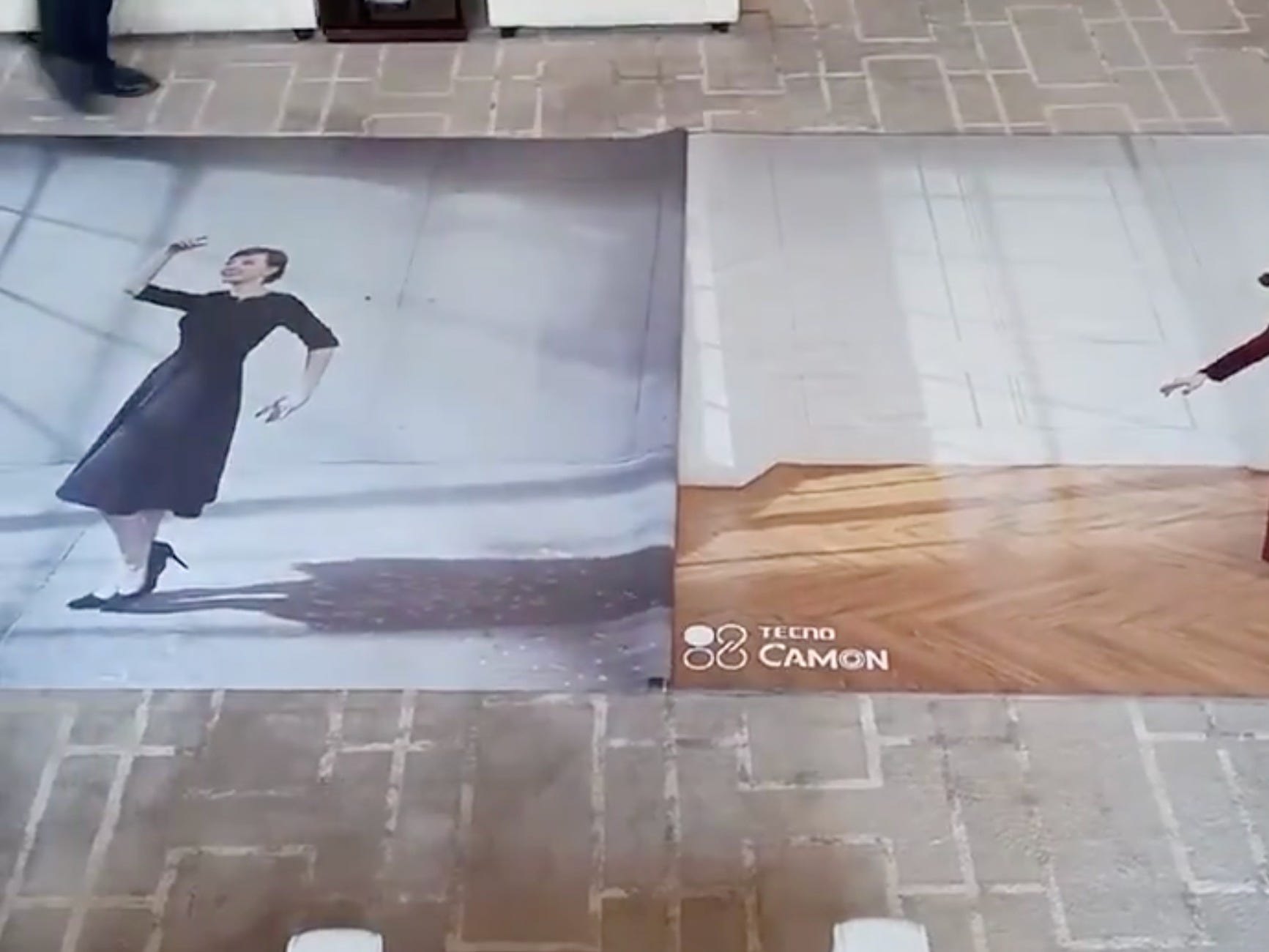 Tecno, a phone manufacturer in China, released a new phone this year. To celebrate, the company captured images of a ballerina dancing and printed it out on large paper to make the world’s largest flipbook. The massive flipbook is 309.76 square meters and is the size of a tennis court, according to Guinness World Records.

This year, a group of British soldiers was able to pull a van almost 50 miles. 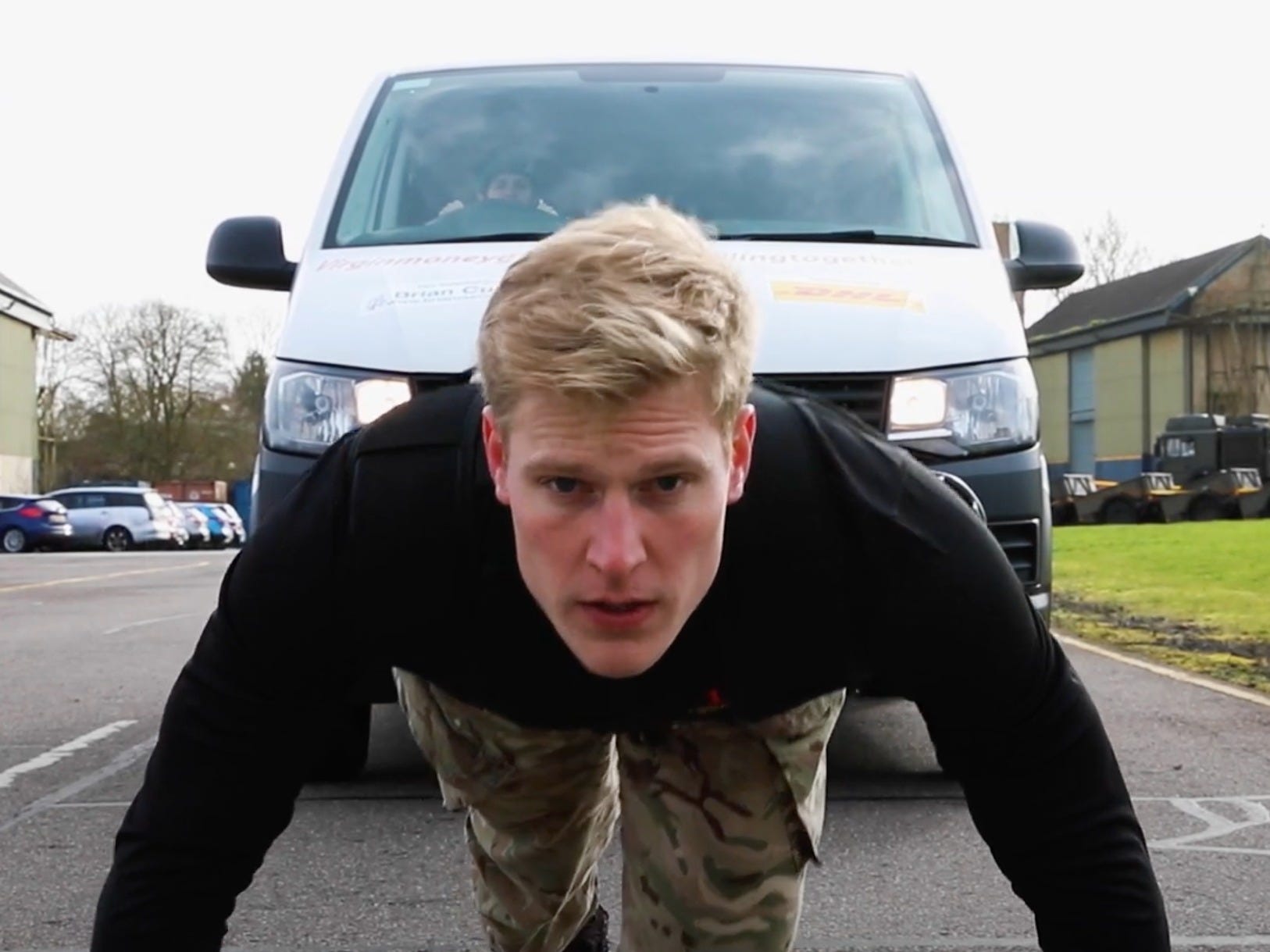 Aaron Thompson/ YouTubeOne of the soldiers pulling the car.

In March, the 3 Regiment Royal Logistic Corps pulled a van that weighs 4,000 pounds through Blenheim Palace, Oxford, in England, according to Guinness World Records. In all, 12 soldiers took turns pulling the vehicle, switching on and off every 10 to 20 minutes. At the end of the 12 hours, the troops were able to pull the vehicle 47.46 miles, earning the title “the farthest distance pulling a vehicle in 12 hours.”

“It’s been emotional,” Captain Jonathan Kinahan of 3 Regiment RLC told Guinness. “It’s been a lot more difficult than I think we originally thought it would be. It was hard, it was dark, it was cold, it was miserable. So yeah, it’s been a long night … As for the van, I never want to see it ever again.”

A 62-year-old man broke the world record for an eight-hour plank. 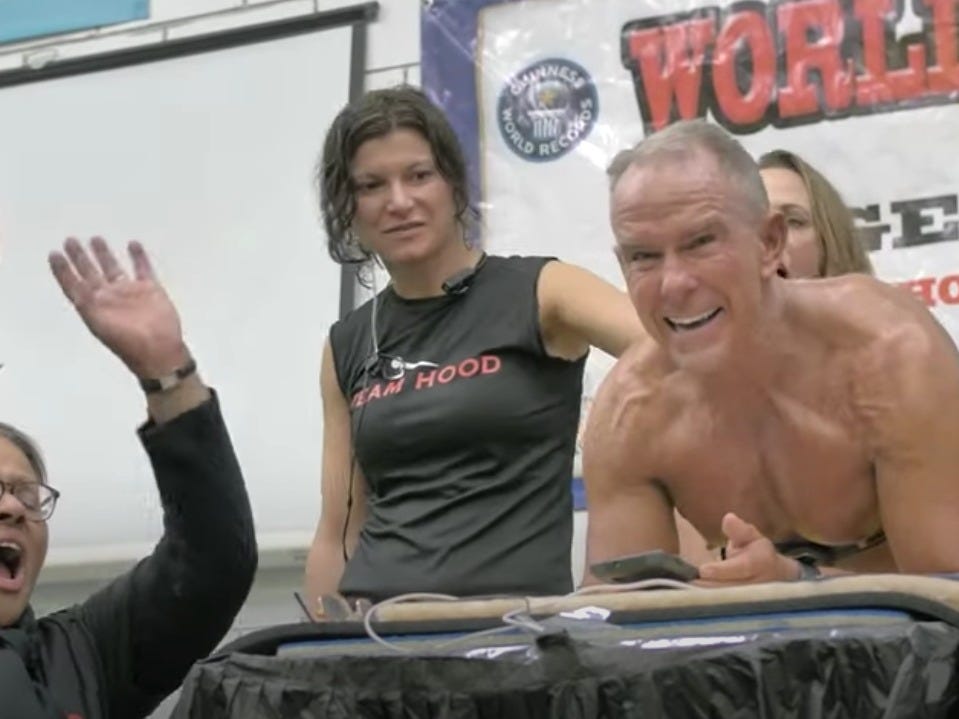 George Hood, a retired police officer and now a personal trainer, decided to break the world record for the longest plank to help raise awareness for mental health. In 2011, he broke the record for the first time when he held the plank for over one hour. He lost his title a few years later, but in 2020 he gave it another shot and held the plank for a whopping 8 hours.

“There are times you get self-doubt. You get bored. You wonder if it’s worth anything,” Hood told CNBC. “Cleaning up people’s mindset is a must … as every human invents themselves through a figment of their imagination and their thinking.”

This year, a woman broke the record for the longest swim under ice for a female. 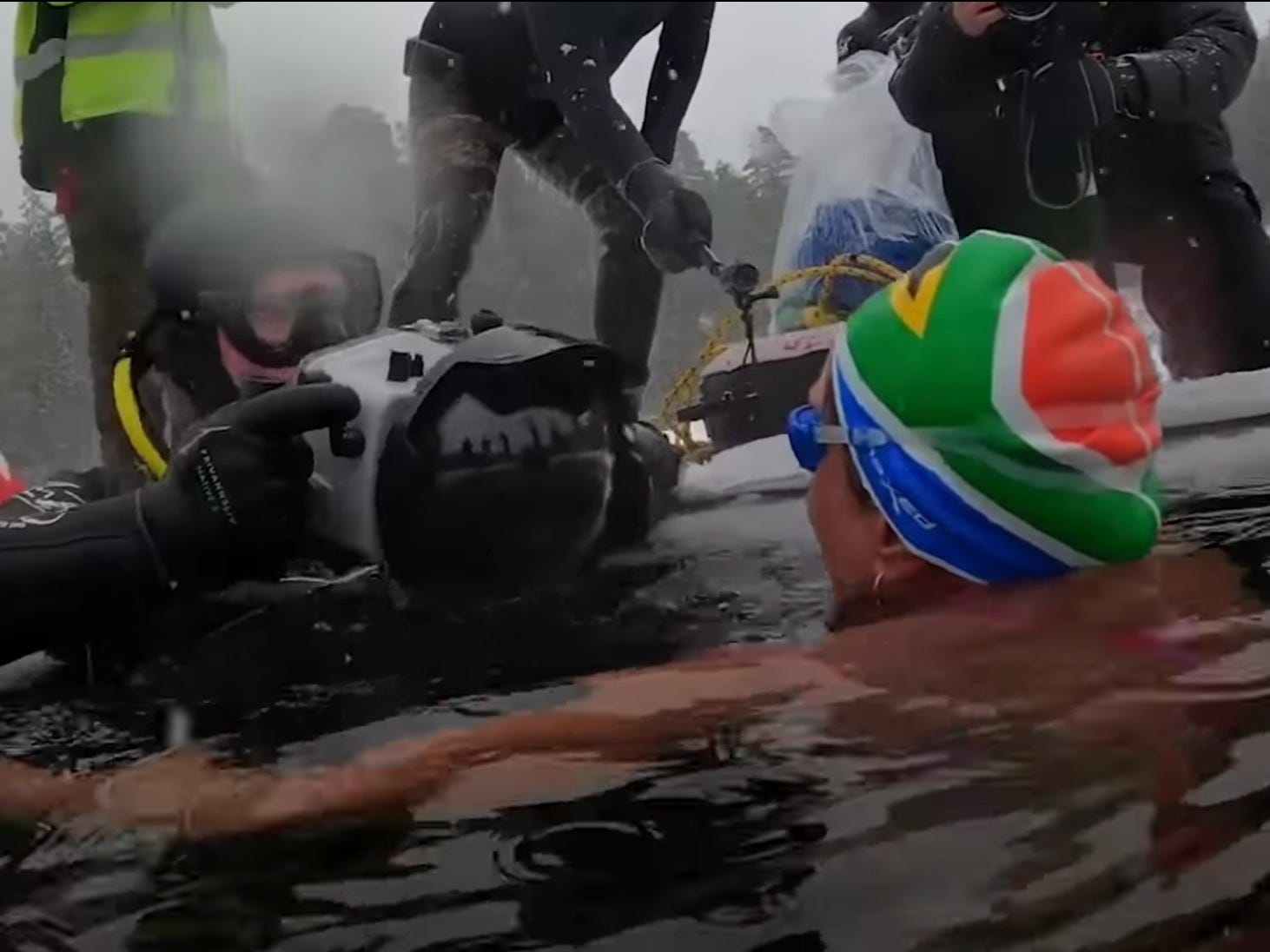 In February, Amber Fillary dove under 13.4 inches of ice in Oppsjø, Norway, and swam for 229.659 feet. She now holds the title for “the longest swim under ice, breath held (no fins, no diving suit) female,” according to Guinness World Records.

One man solved a Rubik’s cube while juggling faster than anyone before. 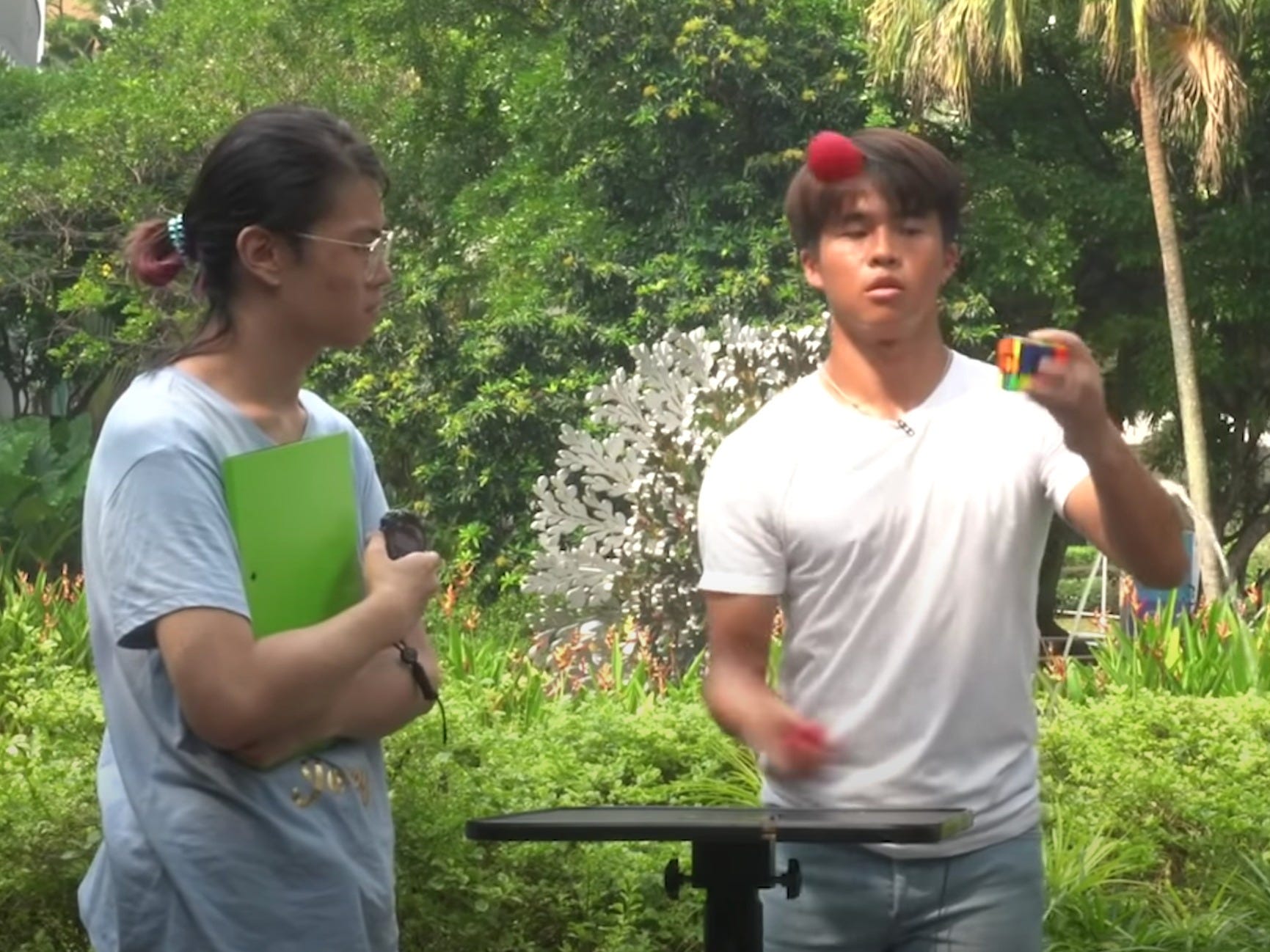 Daryl Tan was long practicing his unique ability to solve a Rubik’s cube while juggling before he even knew there was a world record to break. But once he learned about the record, he set out to break it. This year, he did just that by solving the toy game in 17.16 seconds in Singapore, according to Guinness World Records.

A woman broke the world record for eating the most tomatoes in one minute. 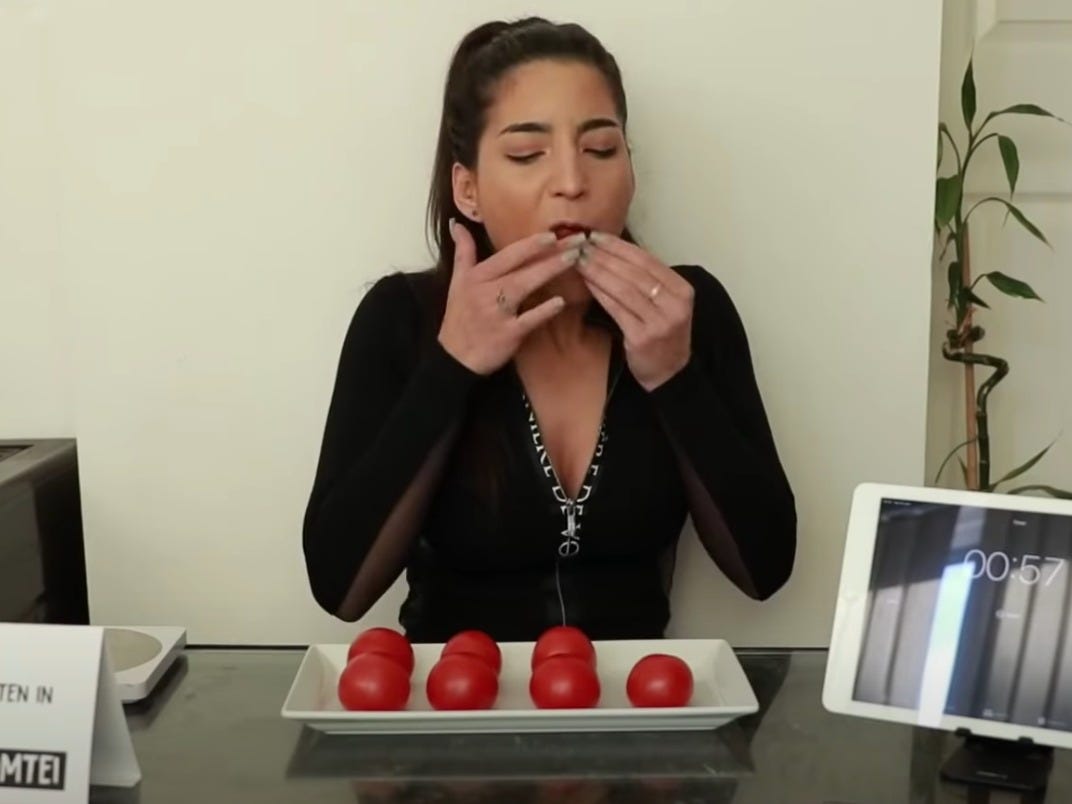 Leah Shutkever, a woman from England, is known for being a competitive eater. In fact, she holds multiple titles in competitive eating, but this year, she broke the world record for the most tomatoes eaten in one minute, according to Guinness World Records. The competitive eater was able to scarf down eight whole tomatoes in the time allotted by practically swallowing them whole.

The world’s largest mouth gape belongs to a teenage boy in Pennsylvania. 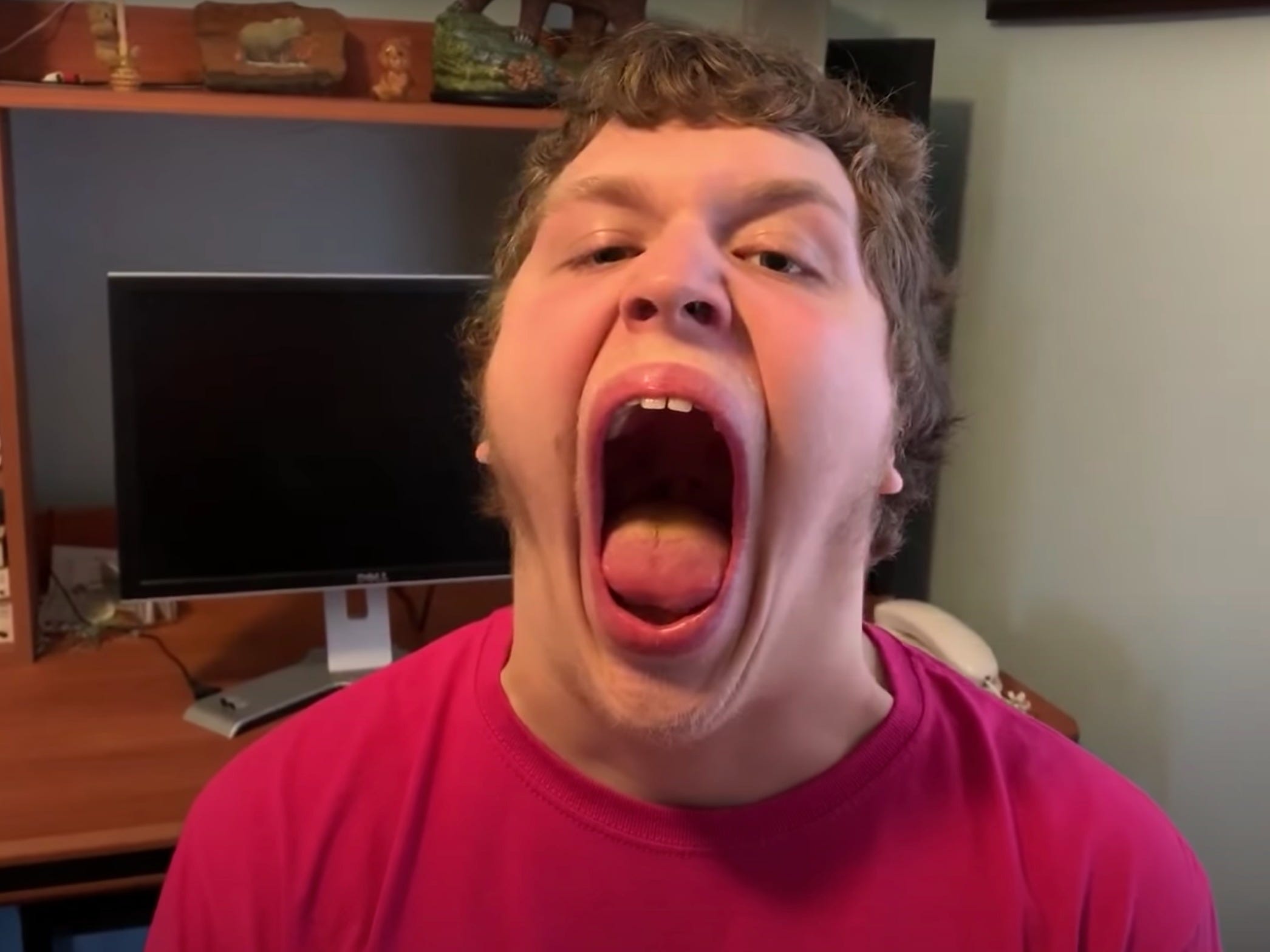 Phillip Angus’ friends used to joke about the size of his mouth, but recently, he learned he could be in the running for the world’s largest mouth gape. This year, the teen from Boyertown, Pennsylvania, had a dentist officially measure the gape, which typically runs from the upper and lower incisors. Turns out, his gape is 3.75 inches, breaking the record of 3.4 inches.

“It feels pretty awesome to now have the record,” Angus told Guinness World Records. “When I first started attempting it, I was fairly sure I was going to get it, but having it feels so much more different because now I’m the best at it. No one else can beat me.”

There have also been record-breaking purchases this year. LeBron James’ trading card sold for $US1.845 million. 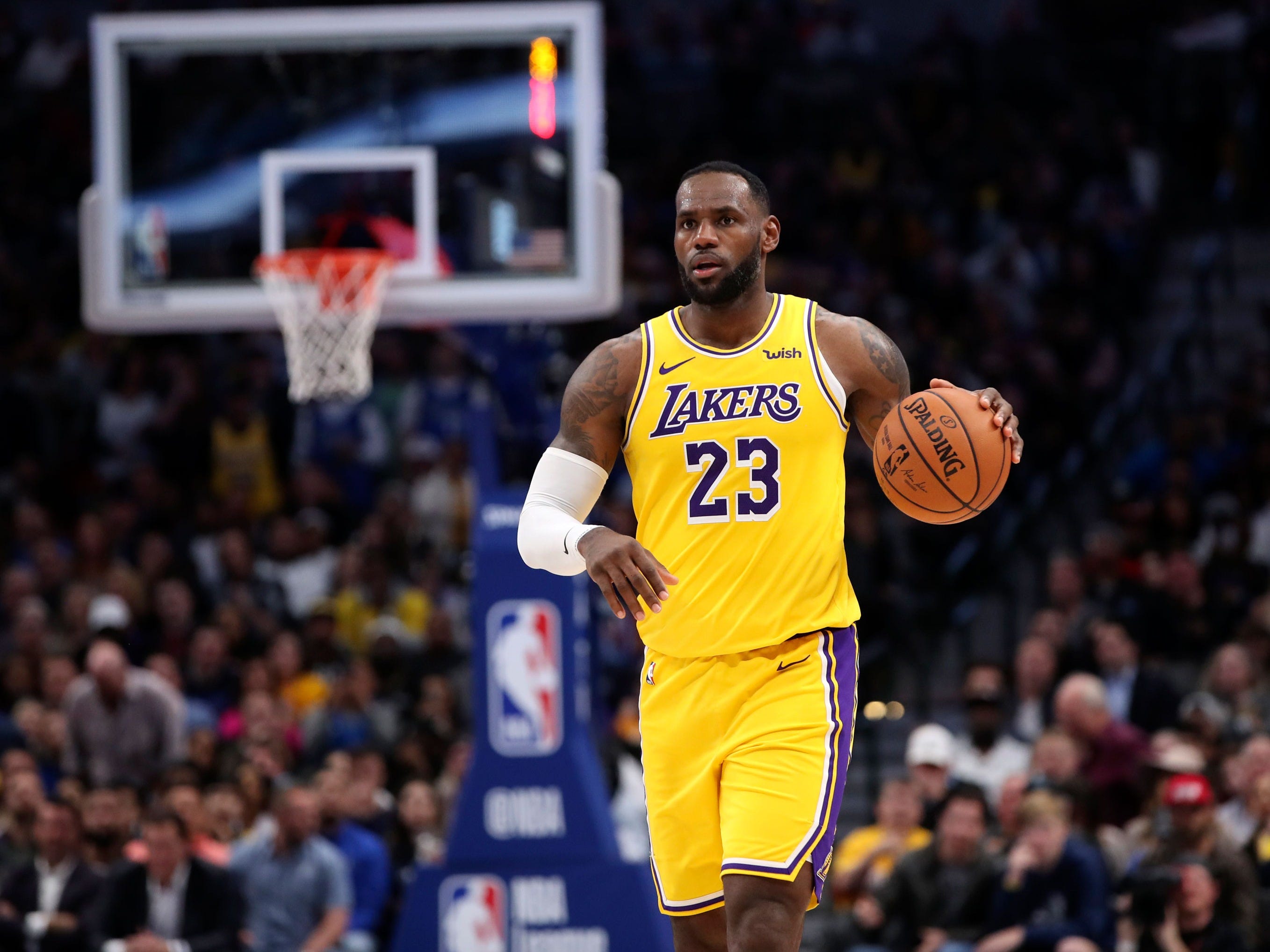 Goldin Auctions set the initial bidding price at $US150,00. Since only 23 versions of the card exist, bidding skyrocketed.

“Our consignors are ecstatic, and this auction demonstrates how strong the industry is and that our bidder database is second-to-none,” the online auction site told Guinness World Records.

Kurt Cobain’s guitar sold for a record-breaking $US6 million. 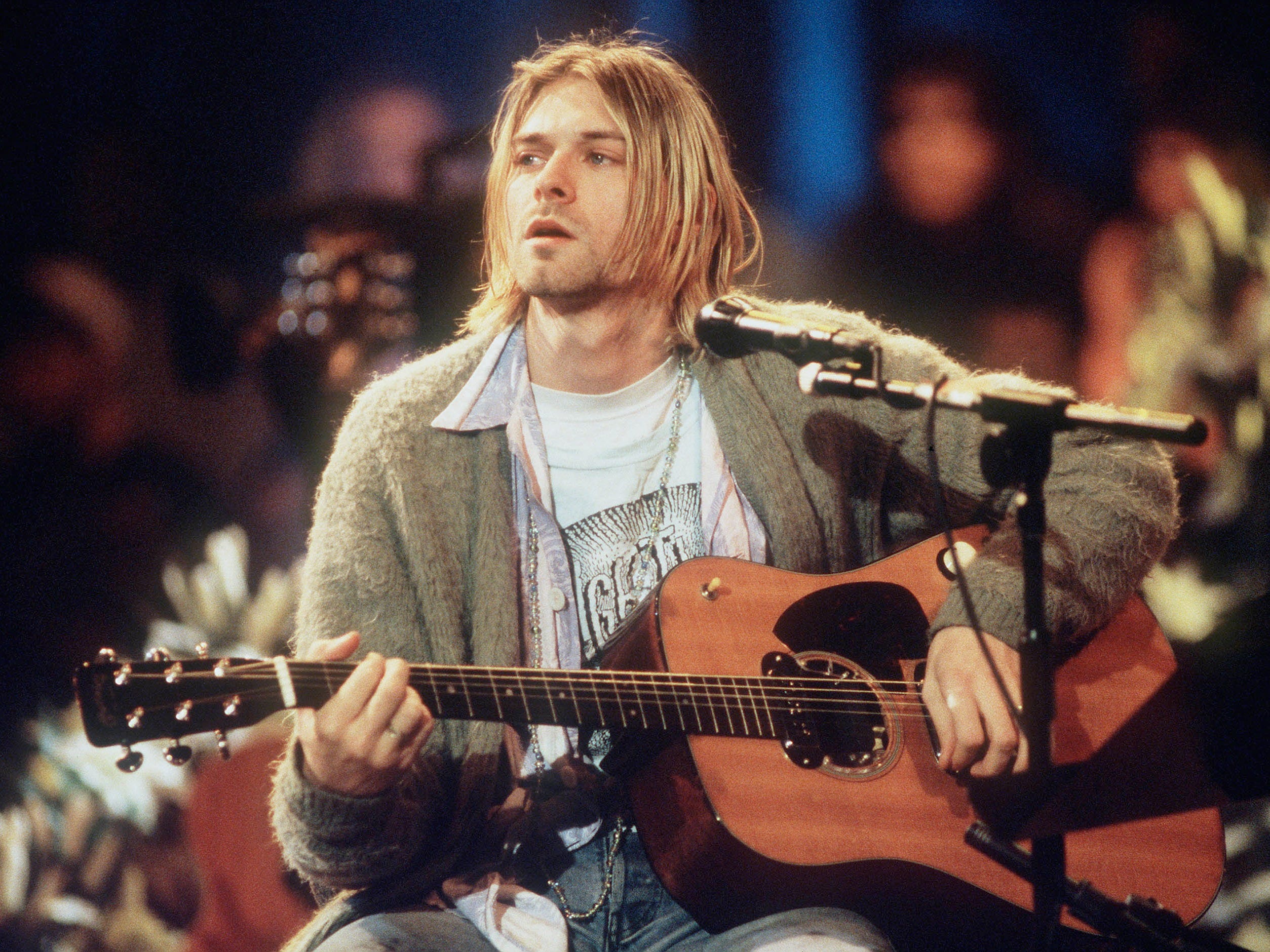 Kurt Cobain played the 1959 Martin D-18E guitar in 1993 when he recorded the live album “MTV Unplugged in New York” with his band Nirvana. That guitar sold for $US6 million this year at Julien’s Auctions in Los Angeles, breaking a world record for the most expensive guitar ever sold at an auction.

South Korean girl group BLACKPINK broke multiple records when they released their music video for “How You Like That” on YouTube. 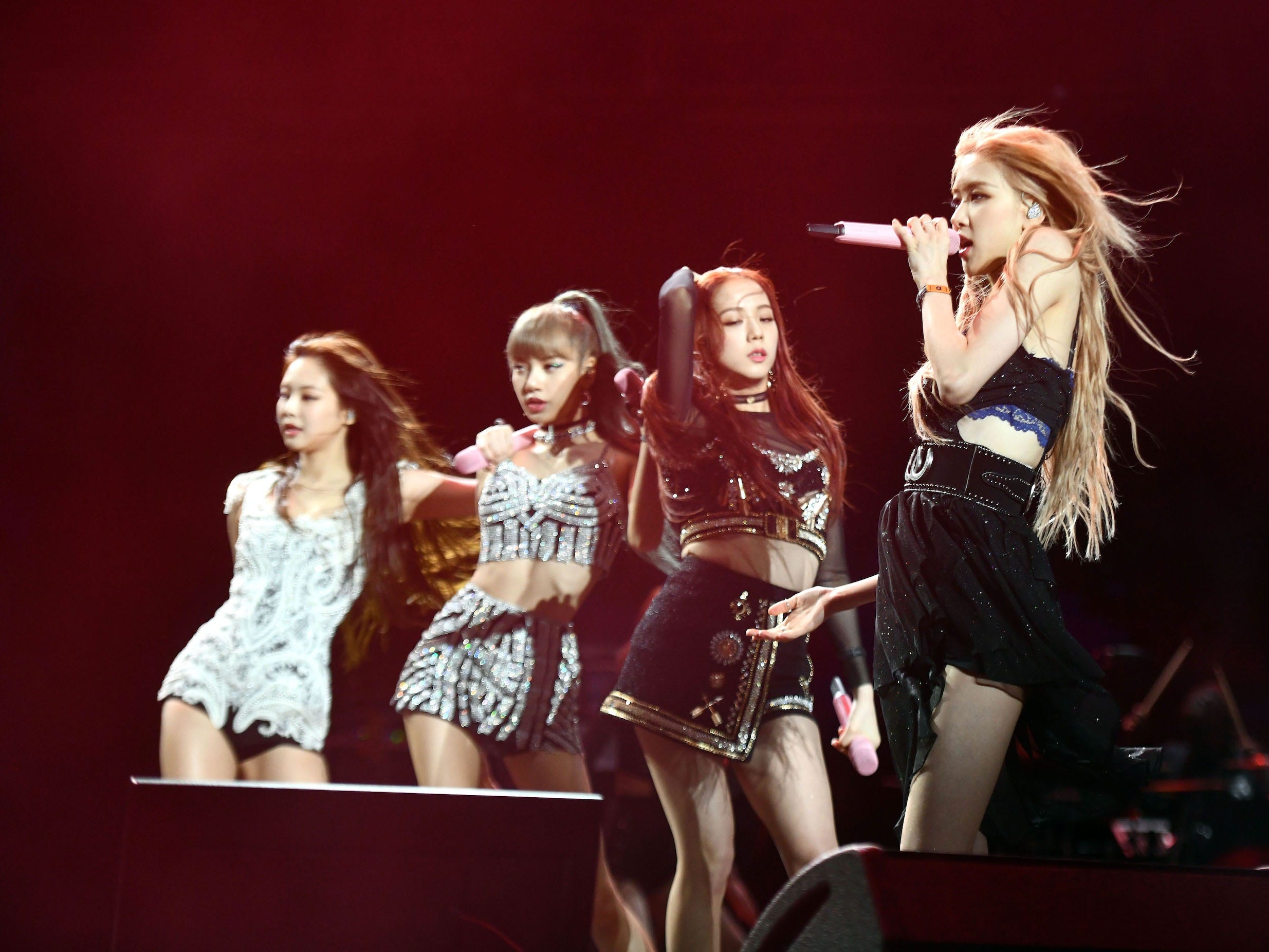