The 2020 election catastrophe that wasn't 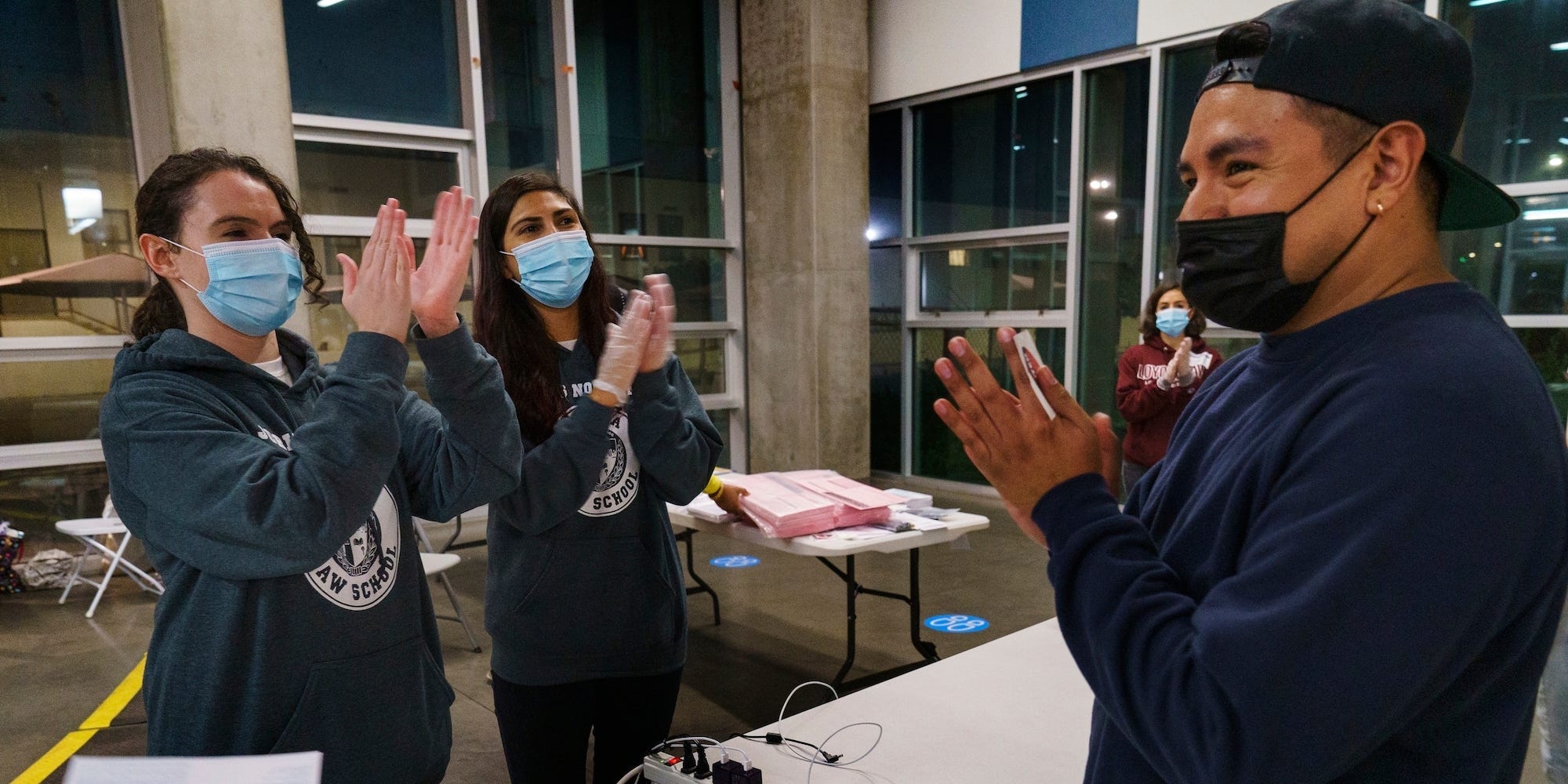 The morning after the 2020 election, many Americans felt a mix of confusion, trepidation, and â€” for some Democrats â€” even sadness over the initial results of the nail-biting election.

Contrary to the rosy picture painted by some polls and election forecasts, the result of the presidential race remains undetermined, Democrats have a slim path to retake the US Senate, and many Democratic House representatives lost reelection bids.

But no matter how the presidential election and other key races turn out, voters, election officials, and dedicated volunteers who helped keep the 2020 general election largely safe and secure in the face of the pandemic are clear winners of this election cycle.

When the coronavirus hit the US, it put additional strain on election offices, many of which were already underfunded and understaffed, and squeezed state and local governments’ budgets. Almost overnight, local election officials had to contend with a massive shortage in available poll workers and skyrocketing demand for voting by mail.

After some states experienced serious issues with both mail and in-person voting in their primary elections, headlines warned for months of an impending election meltdown, widespread chaos with mail ballots, disruptions at the US Postal Service, problems with in-person voting, and vote-counting disputes over the rise in mail ballots that could even reach the Congress or Supreme Court.

On top of that, some experts feared that the hyperpolarized political environment and some of President Donald Trump’s inflammatory rhetoric suggesting the presence of widespread voter fraud would lead to unrest and even violence at polling places by individuals or militias. 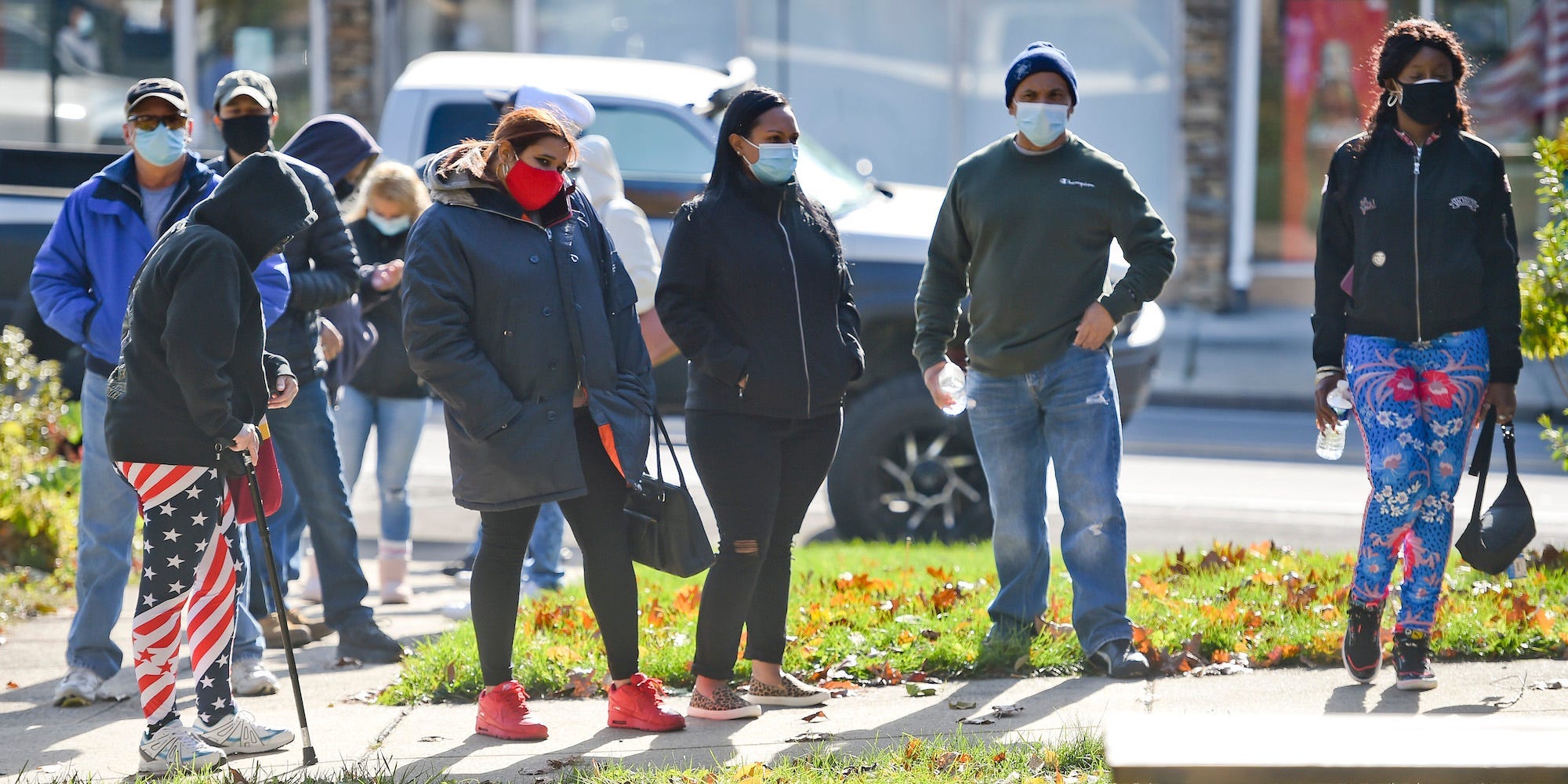 Ben Hasty/MediaNews Group/Reading Eagle via Getty ImagesPeople wait in a line to vote on Tuesday morning.

‘If there weren’t problems, we should be worried’

But despite those challenges, the United States saw historic early turnout and is on track for record-breaking overall voting numbers. The US Elections Project’s database of early-voting data indicates that 100 million Americans voted early in person or by mail in 2020, compared with 57.2 million who did so in 2016.

High voter turnout is not mutually exclusive with election administration problems or even attempts to suppress the vote. There were some administrative issues caused by human error in 2020, as in every election, and efforts on the part of some state officials in places like Texas to restrict voting.

In scaling up voting by mail, some counties experienced problems getting voters their ballots in a timely manner. Printing errors in places like Pennsylvania and New York caused ballots to be sent to the wrong voters. And last-minute court battles over election rules confused voters.

Voters in many jurisdictions also endured hours-long waits to vote in person because of insufficient resources or logistical problems at sites in states including Georgia and New York.

But instead of an election marred by chaos, voting problems, and civil unrest, the 2020 general election will be remembered as one with both record-high voter turnout and participation, including by mail, and unprecedented numbers of citizens stepping up to serve in their communities as election workers.

And the fact that we know of the problems that occurred shows how, for the most part, the system works exactly as intended.

“A presidential election is an election in which 150 million Americans do something very unusual during a short period of time in a process run by a million volunteers. If there weren’t problems, we should be worried,” David Becker, the CEO of the Centre for Election Innovation and Research, told reporters before Election Day. “There will always be some problems in elections. They are episodic. They are sporadic. They are part of the human condition.”

Election Day was also remarkably smooth and uneventful for a pandemic election, thanks in part to the unprecedented number of Americans who voted early and the many who stepped up to be poll workers and help out at in-person voting locations.

Nightmare scenarios didn’t play out, and the 2020 election was a success

While there were some sporadic issues with some polling places not opening on time, equipment not being delivered in the morning, faulty technology, and attempts at voter intimidation â€” all of which are par for the course in any election â€” there were few reports of excessively long lines and no widespread meltdowns at polling places.

“We are on the path to a very successful Election Day, and an election season characterised by record turnout during early voting and record participation in vote by mail,” Kristen Clarke, the executive director of the Lawyers’ Committee for Civil Rights Under Law, which runs the Election Protection Hotline, told reporters on Tuesday, adding that she had not seen “major systemic problems or attempts to obstruct voting” on Election Day.

In addition to the overwhelming success of scaling up mail voting, the 2020 presidential election was one of the most secure from foreign interference and technology vulnerabilities in recent memory, experts like Becker have said, largely because of the now widespread use of paper ballots and voting machines with verifiable paper trails.

US officials undertook a wide-ranging effort to warn Americans of attempts to interfere with the election from foreign adversaries, including Russia, China, and Iran. And in the days and weeks leading up to Election Day, Paul Nakasone, the director of the National Security Agency, told reporters that foreign adversaries interfered less than they had before the 2018 midterm elections.

The country’s top intelligence and law-enforcement officials released a video last month reassuring voters of the safety and integrity of the election and countering many of the president’s conspiracy theories about voter fraud and mail-in voting.

John Ratcliffe, the director of national intelligence, said that Russia and Iran were attempting to “influence public opinion” ahead of the election. He said that Russian and Iranian actors had obtained some voter-registration data, though as ProPublica’s Jessica Huseman noted, most of that information is public anyway, and Ratcliffe’s disclosure did not indicate whether any election systems had been breached.

FBI Director Christopher Wray said that regardless of how voters cast their ballots, “rest assured that the security of the election â€” and safeguarding your vote â€” is and will continue to be one of our highest priorities.” And William Evanina, the top counterintelligence official in the US, contradicted Trump’s claims about foreign interference with mail ballots, saying that “it would be very difficult for adversaries to interfere with or manipulate voting results at scale.”

The day after Election Day, the nation’s top cybersecurity agency also debunked Trump’s claim that the election results in key battleground states like Michigan, Wisconsin, and Pennsylvania were fraudulent because the candidate leading the statewide vote count changed from Trump to Biden as more ballots were processed.

The Cybersecurity and Infrastructure Security Agency marked the following claim as a “rumour”: “If results as reported on election night change over the ensuing days or weeks, the process is hacked or compromised, so I can’t trust the results.”

The reality is that “election results reporting may occur more slowly than prior years,” the agency said. “This does not indicate there is any problem with the counting process or results. Official results are not certified until all validly cast ballots have been counted, including ballots that are counted after election night.”