POWER RANKING: Here's who has the best chance of becoming the 2020 Democratic presidential nominee With eight major candidates in the race, the Democratic 2020 presidential field is set to be one of the largest, most competitive, and most unpredictable in modern history in the wake of the Iowa caucuses and New Hampshire primary.

To help make sense of where all these candidates stand, Insider has also been conducting a recurring SurveyMonkey Audience national poll. You can download every poll here, down to the individual respondent data.

Read more about how the Insider 2020 Democratic primary tracker works.

We’re mainly interested in using our polling to figure out:

We’ve combined the results of the primaries and caucuses so far, Insider polling, and Morning Consult’s daily survey of the 2020 Democratic primary to create a power ranking of the remaining 2020 candidates.

Following his tie in Iowa and his big win in New Hampshire, Sen.Bernie Sanders is currently first in our ranking, followed by former Mayor Pete Buttigieg and former Mayor Michael Bloomberg.

After the first two contests, Buttigieg narrowly leads the race for delegates with 23 pledged delegates compared to 21 for Sanders, eight for Sen. Elizabeth Warren, seven for Sen. Amy Klobuchar, and six for former VP Joe Biden. Reuters2020 Democratic U.S. presidential candidate and U.S. Rep. Tulsi Gabbard speaks during a news conference at the The 9/11 Tribute Museum in New York

Gabbard has some serious viability problems among Democrats.

Not only do a significant proportion of respondents in Insider polling say they are unhappy with her as the nominee compared with her rivals, but Gabbard has not been able to consolidate support in a meaningful way.

Despite being one of the first to enter the race, Gabbard is still polling at 1% in Morning Consult and is considered a less viable opponent to President Donald Trump in the general election than most other candidates.

Gabbard has been barely been a factor in the 2020 primary contests that have taken place so far, getting just 0.19% of the vote in the second alignment at the Iowa caucuses, and 3.2% of the vote in New Hampshire. Steyer achieved billionaire status as an investor and hedge fund manager – but he has since focused his efforts on advancing Democratic causes with two organisations, Need To Impeach and NextGen America.

But after spending a huge chunk of his $US1.6 billion fortune on his presidential campaign, Steyer still has largely failed to articulate a clear rationale for his candidacy and hasn’t won any delegates yet.

Steyer earned just 0.24% of the vote after the second alignment in the Iowa caucuses, and got just 3.5% of the vote in New Hampshire, where he spent nearly $US20 million on ads.

Still, Steyer could fare better in the Nevada caucuses and South Carolina primary, two states where he’s poured millions into ads and has reached double-digits in some polls. But if he doesn’t start winning delegates soon, Warren is the best-known candidate who has not previously run for president, and she has proved herself to be a top-tier candidate.

She overlaps considerably with Sen. Bernie Sanders and Biden’s bases, with half of Biden supporters and 57% of Sanders supporters also being satisfied with her as the nominee in Insider polling.

But Warren’s pitch as a unity candidate and the perfect medium between Biden and Sanders failed to pan out in the first two voting states.

Despite a strong third-place finish in the Iowa caucuses, where she earned eight pledged delegates, Warren came in a disappointing fourth place with only 9% of the vote and no delegates in New Hampshire, her neighbouring state.

While the race is still in flux and her chances could improve, Warren’s failure to perform well in two states where the electorate is particularly well-suited to her in being disproportionately white, college-educated, and liberal is a foreboding sign for the future. Sen. Amy Klobuchar exceeded expectations in the New Hampshire primary, overperforming her recent polling and earned her delegates when higher-polling rivals go on to Nevada empty-handed.

With 100% of the precincts, Klobuchar had earned 19.6% of the vote compared to 9.1% for Sen. Elizabeth Warren and 8.3% for former Vice President Joe Biden.

On the day of the primary, Klobuchar polled at 11% on average in Real Clear Politics’ aggregator of New Hampshire polls in a tie with Biden and Warren.

With a third-place finish and six delegates to show for it, Klobuchar is now a stronger position than ever before in this race, but she still polls in the low single digits among black and Hispanic voters, raising doubts about her ability to win over voters of colour in later states like Nevada and South Carolina. For his entire campaign, Biden’s core argument has been that given his stature as a former vice president and his widespread appeal to voters of all stripes, he is the best position to defeat Trump in a general election.

For a while, the strategy was a smart bet, given that Democratic primary voters routinely rank nominating a candidate who can beat Trump above all else. But to be successful, it relies on Biden actually winning elections.

In Iowa, Biden trailed three of his opponents, earning just 13.7% of the statewide vote and 16% of state delegate equivalents, and coming in seven percentage points behind third-place finisher Elizabeth Warren.

He fared even worse in New Hampshire, coming in fifth place with just 8.3% of the statewide vote.

It’s too early to count Biden out completely because of his lead among African-American, older, and non-college educated voters, which gives him an edge in Southern primary states including South Carolina.

But the extremely fluid and unpredictable nature of the Democratic field, especially Michael Bloomberg’s significant rise in support among black voters, means winning those voters and states is not a guarantee for him. 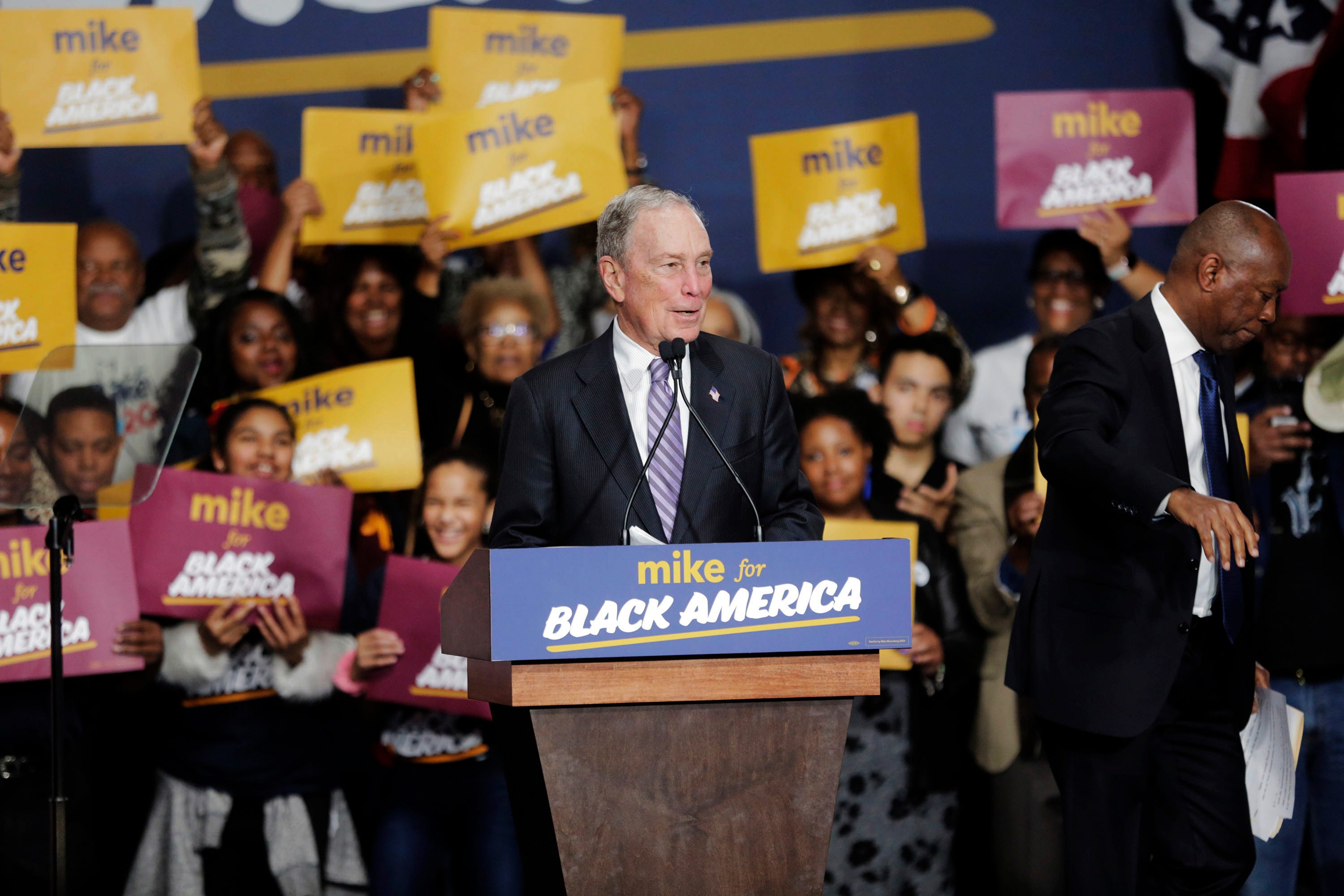 Bloomberg has the luxury of being able to self-fund his campaign with his estimated $US60 billion net worth, and is seriously shaking up the presidential race.

Bloomberg is sitting out the first four primary contests altogether and will try to rack up victories in the 15 Super Tuesday states, which all vote March 3 and account for 35% of the total pledged delegates allocated throughout the process.

Leaving other candidates to fight over the first four states, which only hold about 4% of delegates, has allowed Bloomberg to stay above the fray and build critical infrastructure and in-roads in later delegate-rich places.

Bloomberg has already made a pretty sizable impact. So far, he’s spent a mind-boggling sum of at least $US300 million on his campaign, including ads and has over 2,000 staff on his payroll, dwarfing his fellow candidates’ spending by tens of millions of dollars.

If you’ve watched TV or YouTube recently, you’ve probably seen multiple Bloomberg ads, and his aggressive strategy is paying off, rocketing him into the top tier of candidates.

Bloomberg has shot up to third place nationwide in Morning Consult at 17%, is at 16% in Super Tuesday states, and has an average of 14.2% in Real Clear Politics‘ national polling average, earning him the third spot in our ranking. 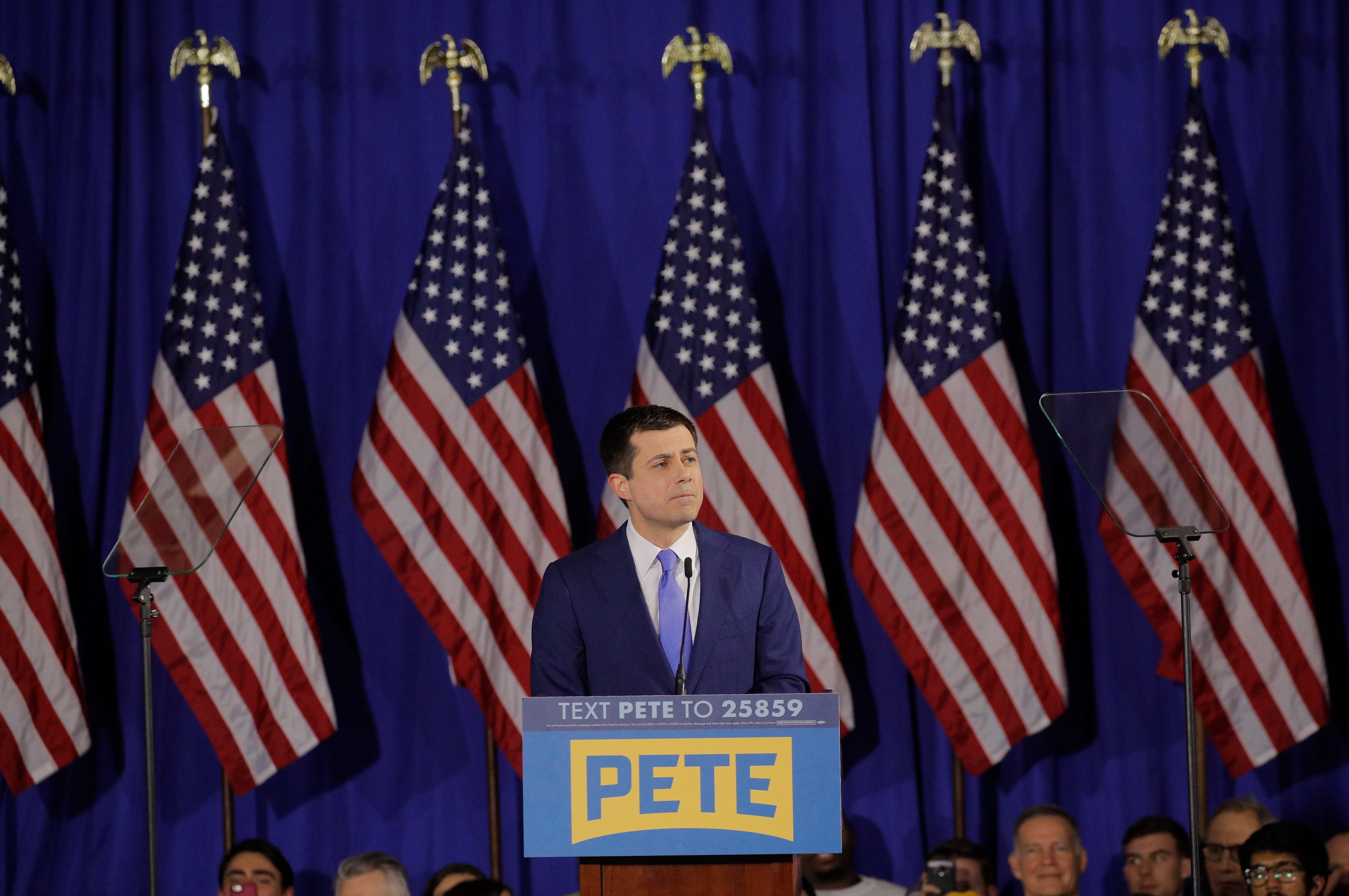 Buttigieg, 38, the former mayor of South Bend, Indiana, was barely known when he entered the race in January 2019, but experienced a meteoric rise on the national scene over the past year, culminating in a tie for first place in the Iowa caucuses.

Buttigieg also had a strong second-place finish to Sanders in New Hampshire, earning 22% of the statewide vote and nine delegates.

In past presidential cycles, a first or second-place finish in Iowa or New Hampshire was reliably a ticket to winning the nomination.

But given the highly splintered and volatile nature of the Democratic field this year, the traditional formulas and maxims of previous presidential campaigns don’t necessarily apply this time around, and won’t guarantee a victory for Buttigieg.

Despite his skill as an immensely talented fundraiser and campaigner, Buttigieg lags behind Sanders among young voters and trails Biden and Sanders among African-American, Latino, and working-class voters, continuing to poll in the low-single digits among black voters. 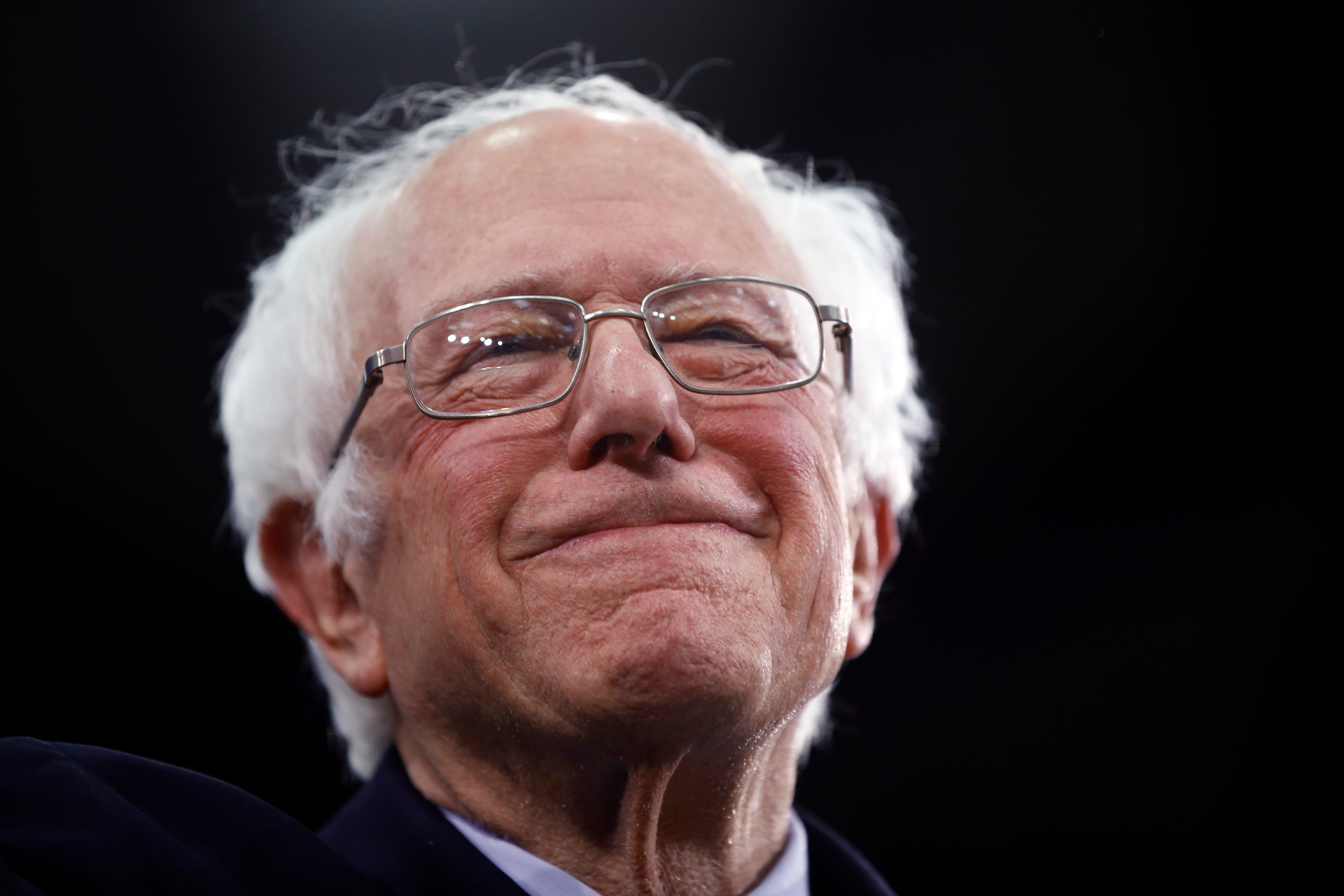 Sanders enjoys widespread name recognition among Democrats from his decades serving in Congress and his 2016 presidential run against Hillary Clinton.

Coming off of a tie with Buttigieg in Iowa and a resounding victory in New Hampshire with tens of millions in the bank, Sanders is undeniably in the strongest position going into the rest of the race now having consolidated the progressive lane.

He’s also established a grassroots army of volunteers across the country and small donors who helped him lead the pack in fundraising, bringing in an eye-popping $US25 million in January alone.

And in later state’s Biden’s implosion gives Sanders a crucial opportunity to build up ground among black and Latino voters, two key voting groups in Nevada and South Carolina.

No candidate has won a major nomination without coming in the top 2 in New Hampshire or Iowa since 1972, which is good news for Bernie Sanders and Pete Buttigieg

Amy Klobuchar got the most bang for her buck in New Hampshire, while Tom Steyer squandered $US19.2 million for zero delegates