After 17 years in the NBA, Kobe Bryant is still one of the best players in the league.

And there’s one reason why — his insane work ethic.

Even after going down with a devastating Achilles injury at the end of the 2012-2013 season, Kobe kept working, and now he says he’s way ahead of schedule on his recovery. In fact, he says he “shattered” the timetable for recovery from his surgery, and that he should be back for preseason instead of missing games well into the 2013-2014 season.

But that’s just Kobe for you.

We picked out our favourite Kobe stories that illustrate just how hard he works.

They include marathon workouts, playing teammates to 100 after practice, and refusing to eat the junk food he loves the most. Kobe has never been out of shape, but he decided to change himself as a precautionary measure. He told the Guardian:

'With summer basketball leading directly into the season -- and I'm expecting to play until next June -- I have to take some load off my knees. I've got to shave some of this weight.' Kobe played a bench warmer to 100 multiple times when he was in high school.

He used to practice by himself without a ball, says Shaq Shaq wrote in his book:

'You'd walk in there and he'd be cutting and grunting and motioning like he was dribbling and shooting -- except there was no ball. I thought it was weird, but I'm pretty sure it helped him.'

He counts all of his made shots in practice, and stops when he gets to 400 He goes through super intense workouts on game days

'Among a dozen other drills, Bryant does suicide push-ups. At the top of the pushup, he launches himself off the mat so hard that both his feet come off the ground and his hands slap his pecs. He does three sets of seven of these. This makes me turn away and whimper softly.' He is on a crazy strict diet right now He has eliminated sugar and pizza and only eats lean meat.

'There aren't really any supplements that I'm taking from that perspective. What I've done really is just train really hard and watch my diet. I think that's the thing that catches guys most. They don't do self assessing.' He watches film of himself at halftime According to ESPN's Jackie McMullen in 2010:

'He often corrals teammates, fires up the laptop, and shows them precisely how they can carve out easier shots for themselves.' He trains for four hours a day during the season, and more than that in the offseason He keeps players after practice as 'guinea pigs' In 2008, Sports Illustrated reported that Kobe will keep random players after practice so that he can try out new moves on them.

Similar to what he did to bench warmers in high school. 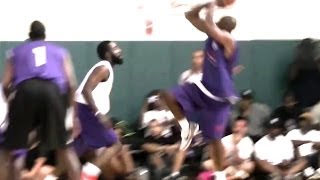 This quote about how he wants to be remembered: 'To think of me as a person that's overachieved, that would mean a lot to me. That means I put a lot of work in and squeezed every ounce of juice out of this orange that I could.' He says he 'SHATTERED' the normal timetable for Achilles surgery recovery Now see the guy he modelled himself after