The global beer market is on track to generate $688.4 billion in sales by 2020. So, in having just a couple of percentage points share of this market, a beer brand can be hugely lucrative.

In recent years the hierarchy of international beer brands has been massively shaken up by the increasing popularity of the alcoholic drink in China. In fact, four of the ten top-selling beer brands globally are now Chinese, according to data shared with Business Insider by research firm Euromonitor.

We ranked the top ten beer brands according to Euromonitor below — some of which you may not recognise.

[slideshow]
[slide
permalink=”/#10-coors-light-global-beer-volume-market-share-13-1″
title=”10. Coors Light. Global beer volume market share: 1.3%”
content=”Coors Light is a Canadian lager brand. It is light and refreshing, with a 4.0% alcohol content. The low-calorie beer managed to ride the wave of an increasing focus on health from baby-boomers, when it launched in 1978.

The beer is most popular in the US, UK, and Canada, but Coors has also attempted to spread globally. In 2008, its owner Molson Coors created Molson Coors International, which has a particular focus on the Asian market.”
image=”http://static.businessinsider.com/image/573059ab910584145c8c162e/image.jpg”
source=”Coors”
caption=”Jean-Claude Van Damme in a Coors Light ad.”
credit_href=””
]
[slide
permalink=”/#9-brahma-global-beer-volume-market-share-15-2″
title=”9. Brahma. Global beer volume market share: 1.5%.”
content=”Brahma is the most popular beer in Brazil. The pale lager comes in two main variations: Brahma (4.3%) and Brahma Chopp (5%).

The 4.8% lager is most popular in North East China, from where it originates and, like many other of the beers on this list, it is now owned by Anheuser-Busch InBev.”
image=”http://static.businessinsider.com/image/57305b8452bcd023008c19f3/image.jpg”
source=”Wikimedia”
caption=”A giant ice Harbin beer at Ice Snow world in Xingal, North East China.”
credit_href=””
]
[slide
permalink=”/#7-heineken-global-beer-volume-market-share-15-4″
title=”7. Heineken. Global beer volume market share 1.5%”
content=”Founded in 1864 by by Gerard Heineken in Holland, the beer brand has built itself up to become one of the leading premium lagers in the market. The beer’s popularity is owed to its light, slightly sweet taste. It has an alcohol content of 5%.

Heineken is known for its creative marketing efforts. In 2015, it became only the second company to win the Creative Marketer of the Year Award twice. Its latest campaign, ‘Moderate Drinkers Wanted,’ Heineken encourages people to consume less of the product”
image=”http://static.businessinsider.com/image/5630a2119dd7cc11008c5453/image.jpg”
source=”Tommaso Boddi/Getty Images for Heineken”
caption=””
credit_href=””
]
[slide
permalink=”/#6-yanjing-global-beer-volume-market-share-19-5″
title=”6. Yanjing. Global beer volume market share: 1.9%.”
content=”Yanjing beer was only created in 1980, according to Bloomberg. In 1995, Yanjing was given the honour of becoming the official beer of China, which meant it was served in the Great Hall of the People from February of that year.

The 6th biggest selling beer in the world is still owned by the Beijing Yanjng Brewery Company. It is pale, comes with a thick head of white foam, and has a faintly bittersweet flavour, according to Rate Beer.”
image=”http://static.businessinsider.com/image/57305d6052bcd0320c8c1971/image.jpg”
source=”‘Yanjing 10° Premium’ by Bernt Rostad, © 2016, Flickr, licensed under Creative Commons Attribution 2.0 License. ”
caption=””
credit_href=”https://www.flickr.com/photos/brostad/4135292205″
]
[slide
permalink=”/#5-skol-global-beer-volume-market-share-21-6″
title=”5. Skol. Global beer volume market share: 2.1%”
content=”Skol lager was created by a combination of British, Canadian, Swedish, and Belgium breweries in 1964, with the express intention of becoming an international beer brand.

The pilsner’s strength varies around the world, but often retails at 2.8% — making it one of the weakest beers on the list. It is now owned by Anheuser-Busch InBev.”
image=”http://edge.alluremedia.com.au/uploads/businessinsider/2016/05/GettyImages-489287546.jpg”
source=”Getty Images.”
caption=””
credit_href=””
]
[slide
permalink=”/#4-budweiser-global-beer-volume-market-share-23-7″
title=”4. Budweiser. Global beer volume market share: 2.3%.”
content=”Arguably the best known beer brand in the anglosphere, Budweiser is a classic American lager which is known for its amber colour and and refreshing taste.

It was introduced into the US in the mid-1800s, by Anheuser Busch after the brewery’s founders observed the lager-making techniques that were popular in Europe.

It has since spread to more than 80 markets worldwide. However, in various markets across Europe, the company is not permitted to use the name Budweiser, due to an old legal dispute with a Czech beer brand, Budejovicky Budvar, which also calls it beer Budweiser, according to Time.”
image=”http://static.businessinsider.com/image/56b821dd6e97c61f048b5886/image.jpg”
source=”YouTube”
caption=”Budweiser’s Super Bowl ad this year starred Dame Helen Mirren.”
credit_href=””
]
[slide
permalink=”/#3-bud-light-global-beer-volume-market-share-25-8″
title=”3. Bud Light. Global beer volume market share: 2.5%.”
content=”Despite the popularity of Budweiser, its younger, weaker sibling Bud Light actually has a greater share of the international market.

The American beer first came out in 1982. The signature blue-branded beer is brewed for longer than the original Budweiser. It contains less sugar, giving the beer a lower calorific content than Budweiser and an ABV of 4.2%.”
image=”http://static.businessinsider.com/image/52ebc6b4eab8eaf56c2368ef/image.jpg”
source=”Anheuser-Busch”
caption=””
credit_href=””
]
[slide
permalink=”/#2-tsingtao-global-beer-volume-market-share-28-9″
title=”2. Tsingtao. Global beer volume market share: 2.8%.”
content=”Tingstao, often served in 640 ml bottles along with a glass of ice, is a common sight across China. The hoppy-tasting Pilsner beer comes from the TsingTao Brewery company.

The beer was founded by German settlers of Hong Kong in 1916. From its inception, the beer focused on becoming an international brand.

In 1972, Tsingtao was introduced to the US, where it became the highest selling Chinese beer in the country. TsingTao’s percentage share of the world beer market has grown by at least 0.1 percentage points each year since 2009.”
image=”http://static.businessinsider.com/image/573060129105841d008c18f7/image.jpg”
source=”Tommie Hansen/Flickr”
caption=””
credit_href=””
]
[slide
permalink=”/#1-snow-global-beer-volume-market-share-54-10″
title=”1. Snow. Global beer volume market share: 5.4%.”
content=”Despite sales being almost exclusively limited to one country, Snow beer is the most popular beer on the planet.

Unsurprisingly, that country is China. Its sales volumes have exploded by 573% since 2005, when it was only the 11th highest selling beer in the world, according to Bloomberg.

The 4% proof lager is a joint venture between SABMiller and China Resources and Enterprise.

The taste is described as ‘very watery’ and ‘highly carbonated’ by Rate Beer. The beer has become popular in large part due to its low price. It sells at around $1 per litre in China, according to Quartz.”
image=”http://static.businessinsider.com/image/555e4e066da811f32a12bddb/image.jpg”
source=”Snow Beer via towineman.com”
caption=””
credit_href=”https://towineman.files.wordpress.com/2013/01/snowbeer_china.jpg”
]
[/slideshow] 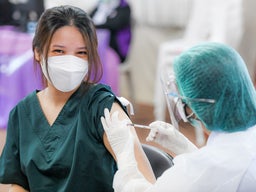 Boosters are about 89% effective against Omicron hospitalization, real-world data shows...